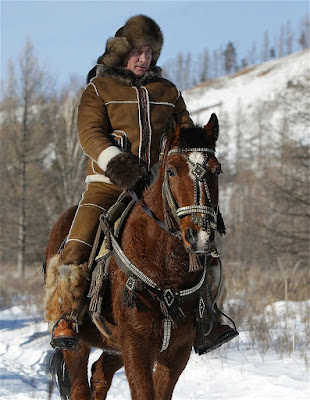 
The reality is that President Vladimir Putin has provided the last golden age of Russia.

Russia has suffered through too many bad leaders. The worst was Joe Stalin, whose extermination of Russian and Slavic peoples is a genocide which Russia has succumbed to like a genetic cancer.

The leader who most encapsulates Vladimir Putin is Alexander II, the great reformer of Russia, who was the Lincoln of the Slavs in freeing the Serfs from bondage. The Jewish anarchists who were funded by the Rothschilds and developed Marxism, after numerous attempts succeeded in assassinating Czar Alexander, and from that point on, Russia went into retrograde as the British monarchy with Rothschild finance, made war on the greatest cultural revolution, outside of Germany.

In the years of the American Civil War as Russia assisted the United States in surviving the London Paris Rothschild agenda, Russia advanced in accepting English invention, and began an industrial revolution.
If American traitors had not allied with the failing British empire in rapine, and instead united with Russia and Germany, the world would have experienced a cultural Renaissance on a global scale, for the Russian leadership was Russ, or Israelite Swedish, her Czars were Slavic Prussians, Germany was Assyrian Semite and the United States was Israelite Joseph. These like master races would have produced a Solomon reign on three continents.

Instead Russia was repressed and turned into a communist plundering east Europe in the dark ages of the East. The final implosion of communism under Mikhael Gorbachev, would usher in a rapine of Russia by the nation rapists who began the division of Russia. From this a former KGB officer arose in Vladimir Putin, in one of the most remarkable reformations in history.
What Martin Luther was to Germany, what George Washington was to America, Vladimir Putin has been to Russia. While the first two inspired movements which changed the world, Vladimir Putin's course has been like Oliver Cromwell of England in the struggle of the internal mechanism of destruction battling against the leader providing the foundations of a future.

I would that this report was glorious for Russia, but it is not. Vladimir Putin has saved Russia, overseen it's most epic struggles against Islamist revolution and cartel globalism, but time is adversary of Russia, for the national aborticism of Joe Stalin has deprived Russia of the wombs in the 21st century to continue as a people.
Russia as has been the case for the Caucasian life givers to humanity, is being by genetic design, out produced biologically by the swarthy skinned races of Islam. If Russia is goaded into a war in Europe, she will kill off her last reproductive salvation. If Russia holds on, China in the east is advancing even faster to an age related genocide, as she aborted her female wombs. China will have more problems with the South Asians pressing for her lands and dwindling population. If Russia stays within her borders and does not engage Islam, then Islam will be the division of Russia, to forming a Volga Enclave of survival.
Russia's hopes for genetic stalemate is a Muslim nuclear to cleanse her borders, peace with the Germanic Europeans, and for China to be  aged into the grave.

It is a thing of advanced sciences, but Vladimir Putin's military which is stated can not win a conventional war against the current United States, which is implementing the extinction of her most valuable Germanic Protestants so the cartel will control the continent by tanskin slaves, has a hope in artificial wombs, to produce Russian fertilized eggs, for employed brood mothers to psychologically adjust these children, that the race would through then colonization of Mars and other planets, become a federation of Slavs among the stars.

That is the final hope for Russia in science fiction, for the reality is, without an out of the box solution, the Golden Age of  Vladimir Putin ends with his final stabilization of Russia, in returning Russia to Russian nationalism.