Iran Shoots Down American Plane - Instead Is Ukrainian 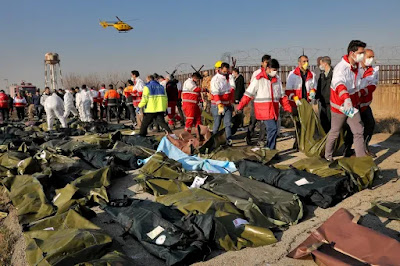 
In all of the initiated chaos in the United States meant as a distraction, over the execution of terrorist General Soleimani, the Lame Cherry has waited a few days to post this exclusive, as everyone has missed the story and the story behind the story.

WASHINGTON (AP) — U.S. officials said Thursday it was “highly likely” that an Iranian anti-aircraft missile downed a Ukrainian jetliner late Tuesday, killing all 176 people on board. They suggested it could well have been a mistake.
The crash came just a few hours after Iran launched a ballistic missile attack against Iraqi military bases housing U.S. troops amid a confrontation with Washington over the U.S. drone strike that killed an Iranian Revolutionary Guard general last week. Two U.S. officials, speaking on the condition of anonymity to discuss sensitive intelligence, said they had no certain knowledge of Iranian intent. But they said the airliner could have been mistaken for a threat.
President Donald Trump suggested he believed Iran was responsible for the shootdown but wouldn't directly blame the Iranians. He dismissed Iran's initial claim that it was a mechanical issue.
“Somebody could have made a mistake on the other side." Trump said, noting the plane was flying in a “pretty rough neighborhood."
“Some people say it was mechanical,” Trump added. “I personally don't think that's even a question.”


Yes the mullahs of Iran shot down a Ukrainian Boeing 737 passenger airliner on the night that Ayatollah Khemeini launched a rather deliberate ineffective rocket salvo at US bases in Iraq. This is the story of what happened.


The United States and the Jewish state have been flying missions over Iran for years. The Jews stupidly had a drone shot down with American technology and the Iranians back engineered that drone and soon had their own drone fleet.
In the lead up to the Soliemani Event, the United States has drones, small and large. It has AWACS, bombers, fighters and reconnaissance flights over Iran, including satellites.

In 1983, under Ronald Reagan's rhetoric against the Soviet Union, the Russians shot down a Korean passenger flight from Alaska to Korea, which was off course on the Soviet border.

What really took place in this, was the KAL flight was designed to be seen. There were though other US reconnaissance flights shadowing this flight, testing the Soviet systems by riding piggy back.

The Russians thought they had been handed an American mistake in a recon flight entered their airspace. Instead they shot down the wrong plane, loaded with innocent people.

As President Donald Trump stated, this was a hot zone where the 737 was shot down. There had been US flights over this zone, and the turban heads were jinned up. Soliemani had just been killed, with other Iranian proxy terrorists. Khemeini had just launched a salvo at American bases. Qud and the entire Iranian missile defense would have been on extreme alert, looking for an American response.

Put yourself in a turban head's head on a missile platform. They think America is coming. They have seen these same flights before. If they let America strike inside Iran, it will be their heads. Those involved in the chain of command were using Soviet based systems and knew the glory which would be associated with downing a Great Satan flight over Iran. It is certain when this Ukrainian jet lit up the grid, the fire order coming from on top, was quick and certain. No one checked if this was a civilian flight.

Now enters the questions which inquiry would answer. Was there a US recon flight in the area which Iran was tracking in Kuwait or Iraq which disappeared on the border, and within a short period later the Ukraine flight appeared?

Did some clever proxy turn off the 737 transponder so the Iranians thought it was a military flight?

Yes accidents happen, but as these events do not take place most of the time, there are indications that Iran had either psychological conditioning or a proxy helped that 737 look not like a 737.

The end result is Iran is silent on it. They knew they shot down this airliner and have lied about it. They also do not suspect the United States was involved or they would be attempting to make a public relations campaign out of this.

It is certain that Iran thought this was a US or Jew force jet on a mission, as they had witnessed this flight previously. That Boeing should have been squawking with Ukraine call signs. It was not.

Iran plane was most likely SHOT DOWN as crash pics show ...

This story becomes more intriguing as the evidence is pointing to this was not a missile or SAM strike on the Ukraine flight, but it was Iranian anti aircraft guns. There are holes all over the fuselage as it has been strafed. 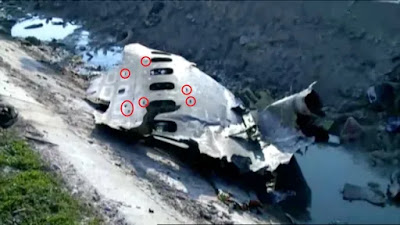 The location of this was outside of Tehran airport. The jet was approaching the Iranian border and the window to shoot was small. From the evidence, it appears the Iranians thought they had a large drone coming out of Iran, with a weapon's payload, and opened up on it. 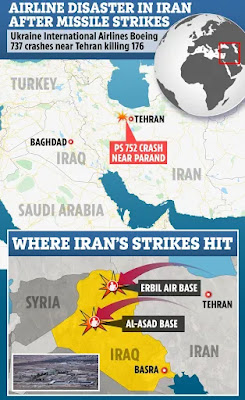 People forget those old bullets from World War II, shot down thousands of aircraft and they do not need S 400 systems.

The results are someone lost a number of spies and terrorists, and they were not all Persians.


The single-aisle, twin-engine jetliner had 167 passengers and nine crew members on board.
Among them were 63 Canadians, 10 Swedes, three Germans and three Brits, Ukraine’s foreign minister Vadym Prystaiko confirmed.
There were also 82 Iranians, 11 Ukrainians and four Afghans aboard, he added.