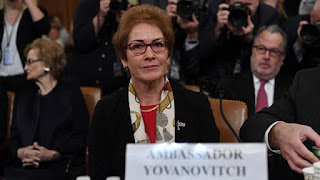 As Adam Schiff and Jerry Nadler, with Nancy Pelosi in the House are attempting to load more conspiracy against Donald Trump, after their impeachment charges were absolutely without criminal content, there has come from this a return to Ukraine in the form of Obama appointee Jewess, Marie Yavanovitch, another foreign entity from Birther Hussein's most interesting non American regime.

It was in the Huffington Posts exclusive, a series of texts between a Republican tracking Yovanovitch and Ukrainians who have been sentenced for influence pedaling in GOP circles. That in itself as this is connected to Rudy Giuliani, looks like the John Brennan, Obama, Loretta Lynch and James Comey deep state is still trying to hide something the Obama regime was engaged in, in Ukraine, and the foremost part of this is Vice President Joe Biden's son, Hunter, getting paid a fortune, in return for Obama Biden, blackmailing Ukraine to stop investigations into Ukraine.

Ukraine has always been a pawn. A pawn to take weapon's grade uranium, and transform it into cheap US energy for atomic power plants, in which Americans never saw a dime in savings. The same uranium which would be LaVoy Finicum murdered in Oregon in a massive FBI trolling operation, to cover up Hillary Clinton's sale of Canadian Uranium One to Vladimir Putin for a monopoly on world uranium.

Obama assured Ukraine that the United States would defend Ukraine from Russian aggression. Russia took Crimea by vote to annex Crimea, in order to gain Ukrainian oil, to keep it out of George Soros' hands. See in all this time, Ukraine had Nazis put into power, and in that, George Soros, John McCain and Barack Obama were all joined at the hip in making Ukraine into one of the most corrupt energy and money laundering operations in eastern Europe. 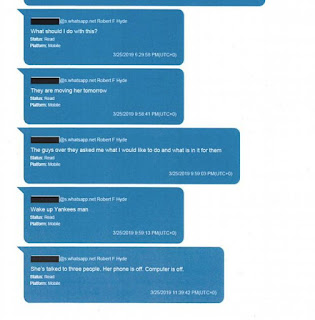 On March 25th, 2019 AD in the year of our Lord, Marie Yovanovitch as Obama's ambassador to Ukraine was engaged in some interesting activities. She held a "No Prosecute List" to cover up the syndicate which Birther Hussein had allowed set up, for the cartel, under the auspices of Rothschild financier, George Soros.

In March of 2019 the Ukrainians were reporting something that Marie Yovanovitch, had her phone and computer off. She had disappeared as United States ambassador to Ukraine. The question in this which the blundering Schiff, Nadler and Pelosi have not assessed is where was this woman and why was it she had gone off the grid.


Did former Ambassador to Ukraine Marie Yovanovitch lie about ...

dailytorch.com/2019/10/did-former-ambassador-to-ukraine-marie-yovanovitch-lie-about-not-giving-a-do-not-prosecute-list-in-ukraine-time-to-release-the-transcripts-speaker-pelosi/
Oct 25, 2019That was former U.S. Ambassador to Ukraine Marie Yovanovitch in her Oct. 11 testimony before the House Intelligence Committee, responding to allegations made by former Ukrainian Prosecutor General Yuriy Lutsenko, who told The Hill's John Solomon on March 20, "Unfortunately, from the first meeting with the U.S. ambassador in Kiev, [Yovanovitch] gave me a list of people whom we should not prosecute."

Solomon: 'Activist' U.S. ambassador in Ukraine had a 'do not ...


There is an absolute reality in this, and that is Marie Yovanovitch was like the Clinton's Jamie Gorelick after 9 11, overseeing the suppression of information in major crime syndicate.

Ukraine literally under Hillary Clinton in Crowdstrike had lied that Russians had hacked the DNC, when it was the murdered Seth Rich who had been copying files for Wikileaks. Ukraine was a major information flow for the framing of Donald Trump via MI6's Christopher Steele in the Pissgate dossier. Ukraine had undertaken a quid pro quo for Joe Biden's corrupt son in a major bribe. The entire nefarious and sewer slime cabal of George Soros and John McCain was centered in Ukraine, and just as Hillary Clinton was covering up Benghazi for Obama, Marie Yovanovitch was covering up what was taking place in Ukraine for Barack Hussein Obama.

Marie Yovanovitch was no more an ambassador than Heinrich Himmler was an ambassador to the Jews. This woman drips of being an intelligence asset of John Brennan, and that is why Donald Trump fired this woman, and why all hell broke loose when he fired her, because she was the person assigned to keeping the Obama McCain crimes from ever seeing the light of day.

Remember it was Paul Manafort who was destroyed for legally moving Ukraine money into the United States with the full blessing of President George W. Bush, a move that infuriated George Soros and the cartel, because that money was linked to the energy grid, and that goes back to the weapons uranium lighting up United States homes.
In that scheme, Americans paid for Ukrianian uranium twice. Once in the purchase of fuel and the second time at a larger price for their electricity, thanks to Obama spiking the electric rates for "Green" energy.


If I were the President, I would welcome the blunder of Schiff, Nadler and Pelosi in adding to the impeachment, because President Trump can now have a real fact finding inquiry at his trial, and begin asking why it was James Comey had Special Agent Gregory Bretzing assassinate LaVoy Finicum over Hillary Clinton selling United States uranium mines to Vladimir Putin as this all centers on Ukraine as the intelligence forward base of operations against Russia, and how Americans were economically raped in high Obama energy bills over Ukrainian nuclear fuel.

The Keeper of Obama Crimes is Marie Yovanovitch, and when Donald Trump in this impeachment exposes these crimes and the swindling of Americans, Donald Trump and his Nazi GOP are going to win such a landslide in the 2020 elections that will have this Obama syndicate indicted and hung on real high crimes against thee American People.

I doubt Donald Trump will be allowed to bring these realities to light, but the fact is Marie Yovanovitch was the gatekeeper of Obama McCain crimes in Ukraine. She never was an ambassador. She is an intelligence asset.