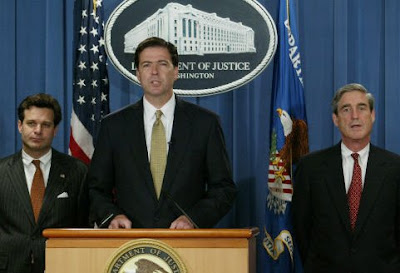 
The statement by President Donald Trump challenging FBI Director Christopher Wray over the criminal activity within the Bureau, is a question the President asked if the FBI criminals would be charged. If the President had been briefed, he would have been aware that Director Wray on the FBI website addressed this question, with the standard pat answer of "they are no longer in the agency".

Prisons are overflowing in the millions, with Americans who would like to be freed, on the punishment that their crimes were remedied in they were no longer employed by the Bureau.


“FBI Director apologizes for FISA Errors (of which there were far to many to be a coincidence!).” @FoxNews Chris, what about all of the lives that were ruined because of the so-called “errors?” Are these “dirty cops” going to pay a big price for the fraud they committed?
— Donald J. Trump (@realDonaldTrump) January 11, 2020

I had to visit the FBI website to find the "fixes" that the Director keeps being quoted about in "40 Fixes".

There were five fixes, but none of these fixes are going to work, for the simple reason, they REQUIRE HONEST PEOPLE. The FBI already had the correct regulations in place, but they did not work, because the reality is Bush, Clinton and Obama employees broke the law to try and keep their regime in power, no matter what.


First, we are modifying our processes under the Foreign Intelligence Surveillance Act (FISA), both for initial applications and renewals, to enhance accuracy and completeness. The FBI relies on FISA every day in national security investigations to prevent terrorists and foreign intelligence services from harming the United States. We are making concrete changes to ensure that our FISA protocols, verifications, layers of review, record-keeping requirements, and audits are more stringent and less susceptible to mistake or inaccuracy. These new processes will also ensure that the FISA Court and the Department of Justice (DOJ) are apprised of all information in the FBI’s holdings relevant to a determination of probable cause.
Second, we undertook an extensive review of investigative activity based out of FBI Headquarters. The FBI is a field-based law enforcement organization, and the vast majority of our investigations should continue to be worked by our field offices. Moving forward, in the very rare instance when FBI Headquarters runs a sensitive investigation, we are requiring prior approval by the FBI Deputy Director and consultation with the Assistant Director in Charge or Special Agent in Charge of the affected field offices.
Third, we are making significant changes to how the FBI manages its Confidential Human Source (CHS) Program. Many FBI investigations rely on human sources, but the investigative value derived from CHS-provided information rests in part on the CHS’s credibility, which demands rigorous assessment of the source. The modifications we are making to how the FBI collects, documents, and shares information about CHSs will strengthen our assessment of the information these sources are providing.
Fourth, I am establishing new protocols for the FBI’s participation in Office of the Director of National Intelligence (ODNI)-led counterintelligence transition briefings (i.e., strategic intelligence briefings) provided to presidential nominees. The FBI’s role in these briefings should be for national security purposes and not for investigative purposes. Continued participation by the FBI in these transition briefings is critical to ensuring continuity in the event of a change in administrations. The new FBI protocols about transition briefings will complement procedures already implemented by the FBI earlier this year to govern the separate category of defensive briefings. The FBI gives defensive briefings, which are based on specific threat information, in a wide variety of contexts and for myriad federal, state, and other public and private individuals and entities. The procedures we recently established for defensive briefings regarding malign foreign influence efforts have brought a new rigor and discipline to whether and how such briefings should proceed.
Fifth, I am mandating a specialized, semiannual training requirement for FBI personnel at all levels who handle FISA and CHS matters. This training will be experience-based, and it will cover specific lessons learned from this Report, along with other new and revised material. Earlier in my tenure as Director, I reinstated an annual ethics training program for all FBI employees, because I learned the training had been discontinued in prior years. While that training was not introduced in response to this Report, all current FBI employees involved in the 2016-2017 events reviewed by the OIG have since completed this additional training in ethics and professional responsibility.
Finally, we will review the performance and conduct of certain FBI employees who were referenced in the Report’s recommendations — including managers, supervisors, and senior officials at the time. The FBI will take appropriate disciplinary action where warranted. Notably, many of the employees described in the report are no longer employed at the FBI.


The essence of Director Wray is FBI Agents break the law, and their "punishment" is being unemployed.  For all other Americans, if a rapist is apprehended, they are unemployed rapists and the way they are unemployed is they are put into prison, not left to roam the streets with all of their connections, to be rehired by the next administration to repeat Pissgate Two.

Director Wray has been a part of the FBI for a very long time. He is a chosen protege of Robert Mueller, who wanted to remake the FBI in his own image. That image was to remove seasoned agents, replace them with junior agents from around the country, by bringing them to DC, in order for these agents to reflect Robert Mueller.

There is a problem though with the Mueller mindset. The FBI engaged in, the entire Bureau, of breaking the law in placing Americans illegally under surveillance. This was before Donald Trump and his staff were spied on and wire tapped, and it numbered in the thousands.


The following year, an Inspector General report revealed that FBI agents may have recklessly issued thousands of illegal NSLs.

Rather than arresting FBI agents who broke the law, Mueller created a new FBI Office of Integrity and Compliance.


Robert Mueller has a pattern in cover ups, from terror bombings, to terrorist financing, to covering up that the Clinton's Jamie Gorelick had created the walls of separation so all of this "John Brennan and James Comey" framing of Donald Trump would, work when crooks were in the system.

Mueller's History of Cover-Ups | Dig Within


The FBI has a long history of not investigating, not enforcing, not protecting, but framing innocent Americans. The problem in these framing operations, someone from the FBI sold the Oklahoma City bombers, materials to make bombs. Someone framed the Hutatree patriots. Someone unleashed an entire operation, centered on Special Agent Gregory Bretzing in Oregon, to steal ranchers land which had uranium on it, that the Clintons in Uranium One sold to Vladimir Putin, and it ended in the framing of the Bundy's and the murder of LaVoy Finicum by the FBI.


How an Undercover FBI Agent Ended Up in Jail ... - The Intercept

https://theintercept.com/2017/05/16/how-an-undercover-fbi-agent-ended-up-in-jail-after-pretending-to-be-a-journalist/
May 16, 2017An FBI agent named Charles Johnson spent nearly a year making a fake documentary on the Bundy family, but he wasn't finished pretending to be a journalist.

lifeontherow.proboards.com/thread/1131/judge-fbi-helped-frame-murder
Jul 26, 2007Judge: FBI Helped Frame 4 Men for Murder--July 26, 2007 BOSTON -- The FBI helped frame four men for a 1965 murder and withheld information for decades that could have cleared them, a federal judge ruled Thursday in ordering the government to pay the men $101.7 million.


The reality is though, just as Attorney General William Barr was the attorney hired to protect the FBI sniper who murdered the wife of Randy Weaver at Ruby Ridge, the FBI Agent who instigated the murder of LaVoy Finicum has vanished, and will never be charged with conspiracy to commit murder.

https://www.cnn.com/2017/06/28/us/oregon-lavoy-finicum-fbi-arrest/index.html
Jun 28, 2017An FBI agent was indicted Wednesday on charges of making false statements and obstruction of justice for allegedly lying to authorities about firing two gunshots during the fatal shooting of LaVoy ...

https://www.independentsentinel.com/fbi-looks-terrible-killing-rancher-lavoy-finicum/
The FBI looks terrible in the death of Robert LaVoy Finicum who was shot and killed by police during a refuge occupation in Oregon in 2016. Several issues of concern have surfaced: the FBI agent lied about shooting Mr. Finicum and firing at the truck, the FBI asked the State police to not wear their body cameras that day, and the FBI requested State police not record the interviews of the agents.

This is all personal for me, as in 2008, I helped found the Tea Party movement, as part of the defenders of Lawrence Sinclair, the innocent, who became Obama's first political prisoner for exposing Obama as a homosexual.
I watched Obama trolls breaking the law, threatening Mr. Sinclair with harm, and the FBI simply shrugged and said, "boys will be boys".

In 2016, I had a surprise visit from Homeland to interview me. They are very well trained interrogators, who mentioned they had been sent by the New York FBI office, on a wild goose chase to talk to me, which was really about intimidating me on what appeared on this blog, in the same things that appear on Coast to Coast AM or Rense.
As an innocent person, who simply types mostly religious posts and satire, I have a federal file on myself, as much as my loved one. I have been recorded and the last thing Homeland did was take a photo of our home.

So when I read of the fixes Director Wray has implemented, which mean nothing, as Barack Obama hired hundreds of new FBI fellow travelers in the days before the image left office. The same unprincipled types, who pass federal screening processes to follow orders and to do exactly what the Trump framers did.

As I type this, we are watching a James Spader series called Blacklist. In it, the FBI hacks people, frames people, covers up crimes, is political and murders people. This all took place in the Obama years, and it mirrors everything which the FBI has been exposed of in engaging in, in the real world.

As the opening quote stated, more Americans are murdered by law enforcement than anywhere else in the world, and that includes North Korea, China, Iran and whatever other shit hole that Americans are brainwashed into believing they are superior to.

Director Wray is protecting the FBI, because that is where his heart is. He is not protecting the Constitution or the American People. A billion more regulations are not going to stop the human nature of the FBI which is corrupt.
Do I believe Director Wray would ever frame Ivanka Trump? No. No more than I would believe the Director or Attorney General Barr would send Homeland to interview me? Not in the least.
The problem is Director Wray is one Agent protecting, the FBI. As he stated the Agency is the DC headquarters and the numbered bureaus across the United States, which are acting with far too much autonomy as Donald Trump experienced or isolated as Jamie Gorelick intended on 9 11, when Arizona was reporting on terrorists and was told to stand down.

The FBI will not be fixed, because it was hijacked from engaging in what J Edgar Hoover was engaged in for interests, and it's police state is designed to protect the interests of the collective national policy, which is basically conglomerates being fed money from the US Treasury in massive debt, to rid America from Protestants, and replace them with unarmed Muslims, Jesuits and Hindu, who are readily manageable and exploited as slave labor.

It is the reality that nothing will change and nothing will be remedied, as the police state has been modeled not to protect and serve, but to intimidate and to enforce. 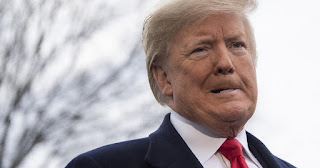