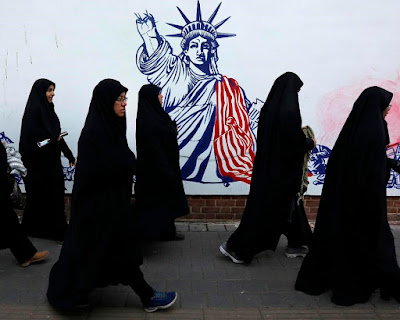 
Thankfully in the first exchange between the leadership of President Donald Trump and the turban heads of Tehran, the Iranians have shown themselves to be Trump's puppets, in they responded with inaccurate missiles in a salvo to the accurate Hellfire missile of the United States.

The President also baited the turban heads with a 53 target response based on Jimmy Carters 53 hostages in the over year long crisis with Iran which cost Carter the presidency to Ronald Reagan, as the turbans have revealed a definitive number of 13 scenarios they are working on.

Earlier in the day, the secretary of Iran’s national security council, Ali Shamkhani, said 13 “revenge scenarios” were being considered in the wake of the assassination of Qassem Suleimani, the head of Iran’s elite Quds force, and that even the most limited options would be a “historic nightmare” for the US.
Ali Shamkhani told the Tasnim news agency: “The 27 US bases that are closest to Iran’s border are already on high alert; they know that the response is likely to include medium-range & long-range missiles.”

Upon inquiry into the matrix, this is nothing what took place in this salvo. It was a diversion for what Iran will engage in. This was for the stampede fodder mobs of Islam killing each other with foot traffic, to keep them at bay from the mullahs.

“We’re prepared for the worst. We hope that cooler heads in Tehran will prevail and de-escalate the situation,” Esper told CNN. “We are not looking to start a war with Iran but we are prepared to finish one

The Iranians positioned the Republican Guard to  receive the US response, as the RG fired the missiles at Americans. As Secretary of State Mike Pompeo stated, the US will begin targeting Iranian leaders, so send the message in America blows up not just the military, electrical, atomic and police state of Iran, but makes the Ayatollah's hide  in their bunkers.
For the next 30 days if any of the Iranian leadership to their Qud police thugs to the turban heads pokes their heads out, the United States sends them to hell.

It is amazing what being a caged chicken does for those being shot at because their Ayatollah is getting them shot at, driving them nuts. They start shooting at Ayatollahs and agree to the Crown Prince returning to lead a peaceful Iran.

There is opportunity in this, providing the United States pins the mullahs to the sand and keeps killing the leadership. The people should not be targeted, but the communists instead. If Iran is though allowed to make manifestations of "peace talks" while they engage in their terrorism, the United States will bleed for this, and this will not end until nuclear terrorism is launched from Iran inside the United States.

The mullahs must go to their graves and the Crown Prince must return, in order to protect the United States from nuclear terrorism, which will arise from this from Tehran.
This is why God put Jehu into the White House, to push the button.


A defense official said later that Iran fired a total of 15 missiles into Iraq. Four failed in flight, 10 struck Al Asad and one hit Erbil, the official said.
There were also reports that the U.S. base at Taji in Syria on the Jordanian border also may have been attacked. The defense official said the U.S. was aware of the reports about Taji, but could give no immediate confirmation.
There were no immediate reports of casualties, an official said of the missile attacks, but “we have yet to do assessments on the ground.”
Defense Secretary Mark Esper and Joint Chiefs Chairman Gen. Mark Milley were at the Pentagon when the first reports of the Al Asad attacks came in, and both later went to the White House to join Secretary of State Mike Pompeo in briefing Trump, who has warned of a fierce U.S. response.

15 missiles, 20% failed. All were incapable of inflicting damage or precision hits.   It does not make any difference if Iran has 10,000 missiles. They will have zero effect.

Iran will after this diversion, if allowed, return to it's successes.


Breaking: Iran threatens to strike Israel and other US allies if there is a counterstrike to missile attack - TheBlaze  ∞ blaze

Mistake by Iran, as striking the Jew will not assure Chicom and Russian support as this expands to nuclear theater. Germany, France and Britain will now fall in line with NATO.

As this will allow the elimination of Hezbollah for the Jews and the advance of Sebastian Kurz' European forces for security of the Holy Land.


PS I would prefer to be Pontius Cherry of the area of Daniel's Tomb. Susa, Persia. I plan to irrigate, plant lots of peach, almond, apple and citrus trees.
Oh and hazelnuts, I like hazelnuts. 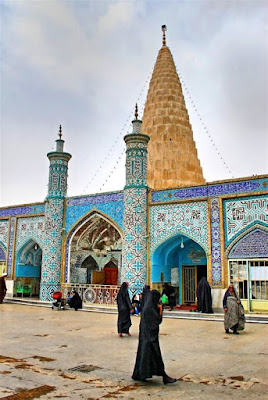