Your IQ Test In How Intelligent Are You. 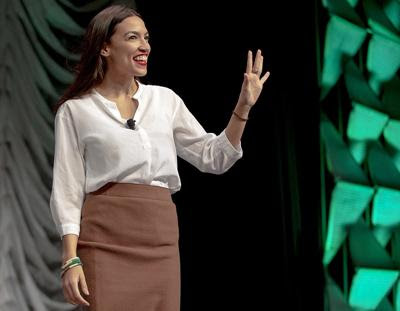 I am not pregnant with Don jr's child. I am just immaculately conceived by the CIA

Now that you are on the defensive, ask yourself how many of you believe the headlines that Nancy Pelosi blundered impeachment?

As you are on the defensive, then answer honestly this past week, what was the real reason that Nancy Pelosi has not handed over impeachment, and it was not because she wanted witnesses and to manipulate Mitch McConnell into doing her bidding.

Or how about this, do you really think that Alexandria Ocasio Cortez is spitting in the face of democrat establishment?

Read what AOC said and then come up with the answer as to what she is doing.

It’s not enough for Alexandria Ocasio-Cortez that the Democratic Party chairman called her “the future of our party”; AOC wants to control every detail of the present, too—including kicking out lifelong, dyed-in-the-wool Democrats who aren’t radical enough for her tastes.
The Bronx socialist announced she wants to start a major purge of her party by dumping anybody who doesn’t pass her ideological purity test—starting with its frontrunner for president.
When the reporter asked AOC, who has endorsed fellow socialist Bernie Sanders for president, about Joe Biden becoming president, she lost it.


Whether you like it or not, in being reminded in what you thought was farfetched by Webster Griffin Tarpley that the people who rule America from the shadows, were going to split the democratic party into a Nazi and Communist wing to forever rule America as a slave labor gulag, that is what Nancy Pelosi is doing. Pelosi is sabotaging impeachment, to get Donald Trump re elected as those are her orders.
Pelosi is to so alienate the communist wing of her party, that they will go hard left for whatever loser named Hillary Clinton steals the DNC nomination again.

In that AOC's group will be furious again in not appreciating Bernie Sanders or Buttcob Bufford in being nominated to the communist party of Amerika, and they will sit out in being cheated again.

This is all about fracturing the democratic party for a Trump leftist wing and an AOC communist wing. It is why Donald Trump was venting about Venezuela in socialism. It is all cover as America is a socialist nation.

Social Security.
Medicare
Food Stamps
WIC
Fannie and Freddie
Obamacare and yes it is still there on the books and the law of the land.

Are a few of the examples of the Adolf Hitler system which is America, which is a political unit, feeding money from the US Treasury directly into conglomerate coffers to provide services from the Pentagon, to Green energy, to the right bread poor people are forced to buy from a major conglomerate, is all American Socialism.

Do not make the mistake that  your democrats or republicans are all kosher. Chuck Schumer is more right wing than most of the republican party. Most republicans are more baby butchering and sodom up the ass than Bill Clinton ever was or will be.
They are brought into power to become zealots for the left as leftist regimes produce the greatest control of the mass population for keeping them scared and for plundering them.
The reason you do not have money, is because money means you have power and control. You are put into inflation jeopardy so you "need" the regime as you are always in a precarious financial position.
For the rich, they are horridly selfish in having sold their souls for their portfolios. One day though this class of chickens on the Animal Farm will be reckoned a problem as the Ukrainian farmers were to Stalin and they will be killed off deliberately, for complete conglomerate control.

You are witnessing a wonderful thing though of the immense power of this group which Webster Griffin Tarpley in his arrogance told the world what was going to happen, several years ago, and it has been moving toward this reality ever since.

The impeachment of Donald Trump will be dismissed, which will provide the cranks on the left even more hatred for Nancy Pelosi and her Nazis for cheating the AOC communists out of lynching Donald Trump. This will then of course move to more demands for Impeachment II, which will drive more Nazis to Donald Trump's sphere, as Donald does not live by Evangelical flocks alone in the land of Sodom.

This is all diversion, and the majority of Americans are too plagued with poverty to care or have time to pay attention. Tell an American that Obama is true blue and they will believe it, instead of the reality he was a foreign birthed fraud, instituted to bring the communist party mainstream in America.

It is why I make satire of all this serious situation, as no one can be emotional over Nancy Pelosi playing her part in this theater or AOC acting like the sultry Latino femme fatale for what is left of the oversexed population in burned out USA. Everyone likes watching the girls.


“In any other country, Joe Biden and I would not be in the same party,” she said. “But in America, we are.”

I can speak for numbers of normal Americans that they don't want Joe Biden in their party either. It is why he is brain limping around with his exploding eye balls.

When you really "awoke" to all of this, this is really great theater, better than movies or television. It is all the point that of the reality is, a group of powerful people who  run the nation, and the world, invested some time in producing this script and each day Nancy Pelosi has to look like a damned fool while AOC gets to come in and do special guest appearances for the CIA, which is communist wing she auditioned for and rose to the top.

Sure America is dead. The Republic is gone. You are the last generation of Israelite Americans in this genocide of Protestants. The only Person Who can change this is Jesus, and until Jesus comes back and puts His Kingdom into power by force, this is the world we are in, with demons manifesting and HAARP shearing us with high fuel bills Obama created to take what income we have. It is though as the Bible says a time to be prudent and silent, so you do not make yourself a target. I do not have your luxury in I am stuck doing this mission of railing at the gates. I do not get upset about any of this theater, as Nancy Pelosi and those who sold their souls and have to come out and manipulate you on CNN and lie to you on FOX have a most unsavory job, as I get to tell the Truth.

Honestly, I don't know why the real powers do not buy me out or bribe me to take over this blog. A few million, and I would be fishing from shore on our pond. I would tell the children a false keyboard was running things, but you would figure it out as the feel would be different as there is only one of me.
Who else would  adore Futurus Ivanka, our future National Socialist President, first female President, like the Lame Cherry does, as we so very much appreciate the selfless heart that Ivanka has endured with.
I just hope that when Hamilton is wiped from the stage that Ivanka hires a bunch of Protestants to do a musical about her, no fags, no liberals, just wonderfully talented people praising her as she should be.

That though is off track, but Ivanka inherits all of this, and is why Donald Trump has done all of this for his dynasty. I suspect if the world lasts, that Barron will be president, to fill in the space between Ivanka's cherubs becoming President.

And you have Nancy Pelosi to thank for it all, in electing Donald Trump and AOC leading the communists out into the wilderness, where they will appear someday, probably after she loses her looks and her tits start to sag, but she will probably have a coin minted for her by one of Ivanka's children when they are president.

Then again, I don't know when the robots get the right to vote in American elections.