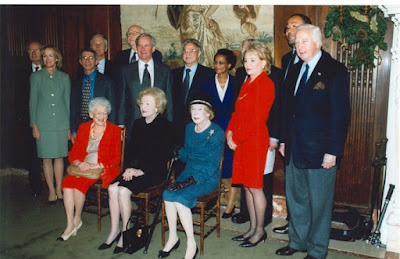 At the age of seventeen, she was sent to a Munich boarding school for six months. While there she was introduced to Adolf Hitler by Unity Mitford.

The Lame Cherry is not going to figure this out for you, but I came across this photo and you can see that little Anthony  Fauci, with the heavy hitters when he still had dark hair. It took me a bit to recognize that old broad in the middle, but the name Harriman came to me. Woman sucked like a hoover and was easiery than Meghan Markle when it came to rich men.

These photos matter, as this is the........pawn file of the bagmen, Mockingbird chirpers and Hitler's whore who flat backed her way to even Bill Clinton made her Ambassador to France.

Beside two additional marriages, Pamela Harriman had numerous affairs with men of prominence and wealth. During her marriage to Randolph Churchill, she had romantic involvements with men such as: Harriman, who much later became her third husband; Edward R. Murrow; and John Hay "Jock" Whitney. Notable consorts after her divorce from Churchill included Prince Aly Khan, Alfonso de Portago, Gianni Agnelli, and Baron Elie de Rothschild.[6][7]

Churchill became well known for her attention to detail with men. When involved romantically with a man, she paid extremely close attention to his desires and preferences, and went to any lengths necessary to satisfy his needs during the affair.[8] William S. Paley, briefly a consort during WWII, said: "She is the greatest courtesan of the century", meaning it more as a compliment than a detraction.[6] The more critical Max Hastings said, acerbically, "she was ... described as having become 'a world expert on rich men's bedroom ceilings'."

This is all about degrees of separation. There is the committee in the lords and the priests. There is their whores who dally about in he parlor. Then there are the money bagmen and the propagandists. You see how this cesspool  pools in the sewage. They never get invited inside, but they benefit from the associations.

I did not know everyone, but you see the branches of this, and the odd turd out, is Anthony Fauci. Now you know why this voodoo doc has more shelf life than J Edgar Hoover with blackmail files.