Mark of the Noem 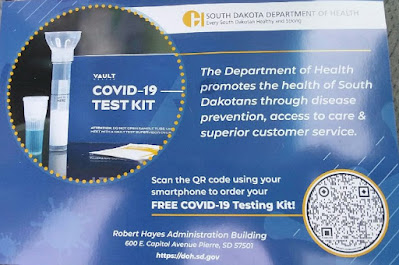 For those of you still bending over for the Corona Queen, that pedo whore Kristi Noem of South Dakota, you probably are unaware that after the Republicans rebuked her, to try and save her ass by passing her own Executive Order dictates to not have transpervs in girl sports.

See that only exposes her hypocrisy in she claimed she did not want to get sued by pervs for the Legislative bill, and then did the same thing with a dictatorial stroke of her pen.

The fraud of Kristi Noem continues though as Corona Queen as this was sent to me and it is coming from Noem's own regime. Noem is mailing out through her Department of Vax, a card herding residents to get the kill shot. This is more than just a Rep. Dusty Johnson mailing ordering everyone to get vaxed in South Dakota, as Noem is implementing the Mark of the Beast, because if you look close at the postcard, you will see an electronic surveillance measure included. Yes Noem has included for people to scan this card, which links it to their personal cell phone, to "find out where they can get the vax". The reality is, once your phone has scanned that image and logs into a regime super computer, it tracks that phone as the data is on that computer".

So Kristi Noem is gathering citizens cell phone data and the only reason she would be doing that is to track them later. Do not be mindfukt in this this in thinking they need to chip people or to hand out vaxports. Noem has a system in place which registers phones already to her regime, and the next step is, "We see your phone did not register, so you have not taken the vax. You are ordered to take the vax and register your phone, so that you will be cleared".

The Lame Cherry warned all of you to not trust this Whore of Babylon, as she has been going Biden left since her first month in office. Literally Noem now has tracking of information on cell phones and that means people are being tracked.

Does that sound Ronald Reagan to you? Now you know why this fraud fled DC with her dirty laundry, to flood South Dakota with foreigners and flip it to Biden. This is traitor John Thune's friend and they are joined at the political hip. Thune hates Trump voters, and Noem only pretended to like Trump voters to sucker them to vote for her and install her into South Dakota.

No doubt about any of this, and I ask that each of you to pay attention to your GOP saviors in just what they are quietly implementing, as I will bet you they are as fraud as Noem, who is now branding her trusting citizens with the Mark of the Noem.