The Evolution Vax of the Metal Men 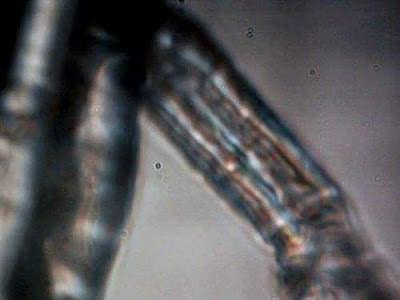 When the Lame Cherry published it's inquiry into the matrix of what the vax was and what it was engaged in, it provided an insight into the transformational building structure which nano technology was building into humans perpetually, as all children born from vaxed women, will carry this enhanced structure.

What I came across later was this from Jeff Rense, and the work of almost 20 years ago of Clifford Carnicom and Jan Smith, who were gathering Morgellon's threads and placing them under an electron microscope. It is evident in the above photo, these are a synthetic, type metallic plastic structure, which appears a duplication of the cyborgs of Terminator, as if you recall that fiction, industry had created a platform for AI life, based on human blood which was basically a living metal.

When I inquired, the matrix was projecting that the vax fibers which have all been proven, were carriers, and they also were knitting new tissue, immortal type tissue, and again, if you study the above fibers, and understand the pain of Morgellon's, that these fibers were replication and being rejected  the human body. So replication was already known, but it was conflicting in the human body, like a splinter being forced out.

This has all changed now in this current version of the vax fibers, and inquiry states they will replace human tissue. As they are all black, apparently even Black people will be blacker than Toby's ass, as that is the color of the new immortal species, a sort of glowing human rainbow of blackness.

If You Think These Nanotech Fibers Are Just
Single Strands Of Something Uniform...Take A
Good Look At One Under 5600x Magnification
And You Will See Astonishing Nano 'Machinery'

As We Said, Here's Johns Hopkins PROOF The PCR
'Test Swab' Can And Is Being Used To Vax Refusers
Any Kind Of Nanotech Or Drug Imaginable Implanted

It was Carnicom's and Smith's work which discovered these "egg sacks" on the sides of these fibers, which points to a reproduction in this early model. I honestly believe these are all conductors of electrical magnetic impulses, and will tune themselves to 5G and Elon Musk's SatNet which is being funded and deployed. 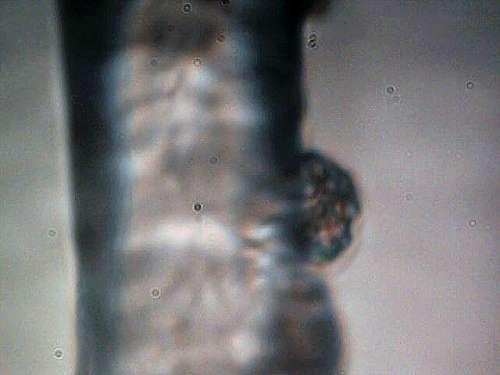 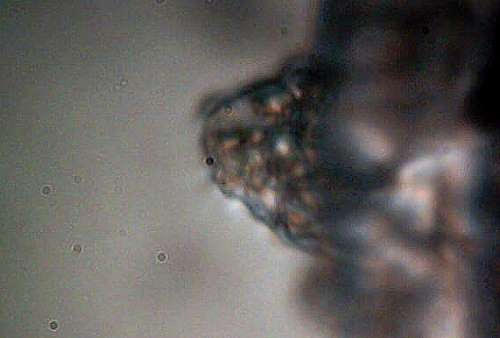 This would make sense to what is taking place. MERCK has their anti virals, which apparently will be the pacifier to stop autoimmune reactions, for this new synthetic structure to complete it's course of making those who accept the sign of the regime, will be this kind of alien glowing, sickly multi color thing, most indestructable. This is DemonTek and that is the source of this is demons like Metatron who provided the first advancements to humanity to undo the Promise of God.

I keep going back to David John Oates in Reverse Speech, finding the Oz PM the word SCAB, as there is a scab with this. Inquiry seemed to indicate this is a sort of synthetic cancer which produces a sore to keep the vaxed in line, as they approach being immortal. A new yearly vax will bring the scab of life to the sore. It will be hell in not being able to die in this perpetual cycle.

This hidden verse in Revelation which most pass over, indicates that something is going to occur in humans where they will not be able to die. The only way that could take place is some immortality structure replacing human tissues.

Revelation 9:6 KJV: And in those days shall men seek death, and ...

It appears that humans will be artificially evolved. This biological weapon was purging the Neanderthal sublinks from humanity and is in genocide against the Sons of Light of the God form, as a fiberform  advancement is being pressed. The synthetic prions have purpose and it seems logical once the immortals begin to appear, that a genocide of mortal humans will be unleashed, those who do not accept this mark and it will be apparent. The martyrdom will be replaced by the sore, the perpetual rot. In that, the Lake of Fire appears the only option to eradicate these immortals as they can be destroyed, not being eternals.