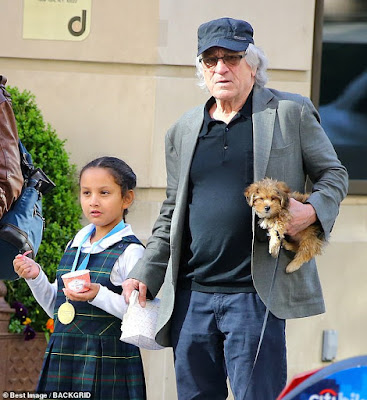 Robert DeNiro is infamous for acting like a tough guy on film and acting tough when threatening Donald Trump, but when it comes to wives and women, DeNiro's real persona appears Black women need to know their place as DeNiro proclaims his White privilege.

This is about a divorce, where DeNiro is fighting with his Whiteness, that he should have custody over the daughter of colour which his Black wife produced in their marriage. What could Robert DeNiro relate to a person of colour with his affluence, compared to an African American woman who has experienced the Black Experience and can only understand what her quadroon child will face in life. The answer is DeNiro can not provide anything of support for People of Colour from his White privilege.

Black women according to DeNiro, attempting to bully his ex wife in court, do not deserve the same rights as women of other races. When DeNiro was getting sex out of his wife, she was free to spend 375,000 dollars a month to maintain her family's lifestyle, but now DeNiro has cut that to 100,000 dollars, in a New York where everything is ivory tower expensive.

DeNiro claims this plague has hurt him financially and he is being forced to work to pay taxes. His being a tax delinquent has nothing to do with his responsibility as an ex husband or father of children. Children should not be made to suffer, just because Robert DeNiro can not manage his finances. Those children should not be ostracized nor homeless just because they are Black.

DeNiro still flies his helicopter out for lunch. He has plenty of money and for that matter he has plenty of mouth in hate speech against Donald Trump and his supporters, so perhaps if DeNiro had spent more time paying his obligations, instead of ranting like a sociopath, he would not be trying to make his Black wife and quadroon children living in rat and cockroach infested quarters.

I never have understood rich people. Why is it  they get paid tens of millions of dollars and their first impulse is to spend money, instead of paying the IRS their full share. Regular people pay their taxes first in every paycheck, but not DeNiro. Paying for liberal welfare programs for foreigners is not what Robert DeNiro spends his money on. No, that is where you are being robbed in funding liberal programs. Instead DeNiro lives like a king and then we are all supposed to feel sorry for a man who is being paid millions of dollars to work.

Yes that is what DeNiro's lawyer was complaining about in court. Poor Robert DeNiro has to show up and work, just like every poor person does, but DeNiro being paid millions of dollars is a real hardship, as apparently he does not want to pay his fair share of taxes, so he can sit on his fat ass, as his children are made to go without because of this deadbeat.

Robert DeNiro has nothing but White Privilege at the absolute expense of Black children and children across America as he does not pay his taxes.