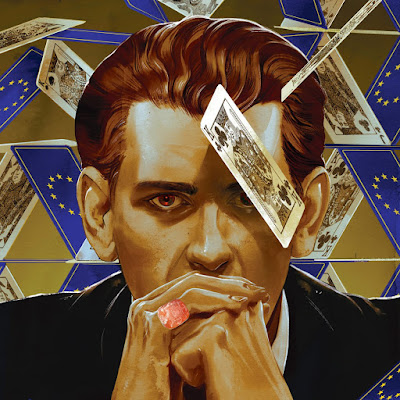 As most of you have missed this with the vax diversion, the reality is the group who stole the 2020 American elections, led by the CIA, DIA and FBI have mounted a phase two in Europe against Chancellor Sebastian Kurz.

For those who need a refresher, the Clintons with their Ashkenaz operatives, set up the Kurz Austrian government with a "Russian" mole that brought down Kurz's governance, as Steve Bannon and the anti Francis Catholics joined to try and nationalize Europe in the melee, failed utterly, and the Franco German Merkel and Macron established a feckless EU regime for them to manipulate.

Sebastian Kurz though has not been sitting around doing nothing, as he has been quietly moving the Habsburg rule back to the front of Europe, this time in back channels. What is relevant in this, is Sebastian Kurz, has joined the vax monopoly with the Dutch and Jews, and has made Austria the center of this.

Kurz also held the Iranian European Summit in Vienna, which excluded the United States. Austria is once again the driving force in the two major issues of the major 4.

Austria is in control of the vax, which is the coming global domination as Kurz has established the Next Gen or Phase II of the vax in control.

Austria controls the Iranian nuclear issue with other nuclear powers of France, Russia, Germany and China.

The two other issues of Russia and China, Austria is in best of relations with Russia and is on good terms with China, while the United States is threatening and being threatened by both nuclear powers.

The above headline was European Politico, published out of Arlington Virginia, which indicates this was a CIA hit job on the Chancellor in a second phase. The entire article of "leaked" emails, which Politico EU damns Kurz, basically reveals he is a shrewd politician. Nothing wrong with that, unless you are the group trying to take over the world with the vax, eradicate and erase billions of people, and Austria has moved to monopolize control of these key issues out of Obamaland USA with the Queen.

Kurz must have made impressive inroads and control for this hit piece to come out. The problem is that portraying Kurz as ruthless, is exactly what Europeans are longing for to fix things. The Europeans adore absolute leaders like Napoleon, Frederick and Hitler. They respond wonderfully to shrewd and iron fisted leaders, who provide comfort and exploit other continents.

Disrupting European leadership does not seem to be a wise decision, unless London and DC desire Russia to invade a weakened Europe, with a coup against Sebastian Kurz, but that is what this article is about, leaving Europe open for Russia to be goaded into a conflict in Ukraine, while China is forced out into the ocean to make  a swim fight over Alaskan oil.

Sebastian Kurz is a contender to those who are behind the world intrigue. He has become such a prominent force that a second coup attempt has been unleashed upon him. He may well be that Biblical force which was predicted, as those against him, are honing an edge upon him which will render the world

Austria receives around 1 million additional doses of vaccine from the #EU. The President's

The additional vaccination doses announced by Biontech / Pfizer enable the vaccination schedule to be accelerated further and an additional 500,000 people to be vaccinated in Q2.