Kamala Harris Absent But On Duty 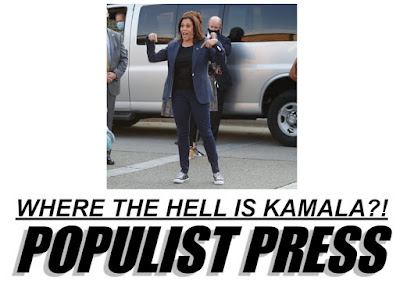 The Populist Press intruded into the, above the law, and beyond questioning, of our Quadroon Birther, Vice President. Kamala Harris.

It should be enough that Pedo Joe Biden, Resident of the White House, unless living in Delaware, appointed with absolute trust, Kamala Harris with the security of the United States on the Mexican Mexican border.

Let us face the facts, that children thrown over a wall, molested in Biden cages, and yes living in cages, got it better than the shit holes, they streamed out of. It is better to be ass raped in America for a 1400 dollar stimulus check as warm up for the Catholic and Lusthern priests, than to get a broom handle up the ass with splinters in Guatemala for nothing.

Apparently Steve Bannon with his DIA millions could not find our Kamala who is absent as Obama Bush fund child trafficking into America, but the Lame Cherry could.

As you can see Kamala has been at the exclusive Beverly Hills plastic Surgeon, Dr. Bandi Khan. You will remember the botched butt lips procedure that Kamala undertook to be Vice President, which was hideous. Well, Dr. Khan assured Kamala that he could enhance her, so no one would notice her huge butt or butt lips. 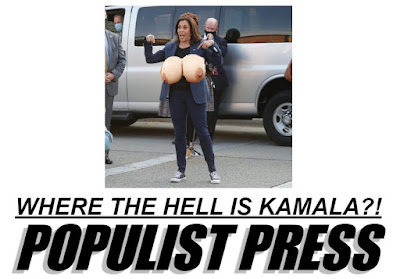 As you can see, Kamala chose the WTM, White Tits Matter, in the Marilyn Model, yes the very tits that John F. Kennedy bouned around in bed, Kamala Harris now has, but instead of Ms. Monroe's D size, Kamala chose the Double G model, with large areolas, and not the Madona metal pointies, due to the discomfort of chafing in summer and frostbite in winter.

All of us can ask, what is more important, Kamala Harris securing the border which no one wants secured or Kamala Harris can take border security money, from Homeland, which has money for luxuries but not security, and use that for breast enhancement as Kamala Harris is taking a stand that White Breasts Matter, WBM.

I know some of us were concerned that Kamala Harris was wasting our money, and not doing anything, but as you can witness Kamala was investing in America's future. Who can not say that the reservoir of Silicon which Kamala now protects will not be important in this silicon chip shortage encompassing the world in this Obama Fauci biological weapon attack out of China upon the world.

The Lame Cherry says that Kamala Harris should receive the Nobel Prize for economics for this industry saving gesture in providing America a silicon stockpile for our future.

Nothing more needs to be said about this, except Steve Bannon needs to stop being so shortsighted as Kamala Harris is planning for our future.