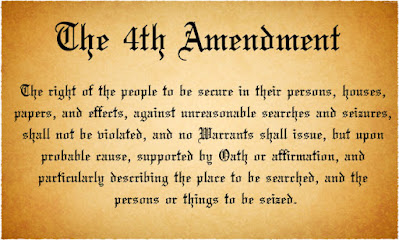 Forgive my ignorance, but when did this Second District of New York, become the Government of these United States? This is the place that James Comey's daughter investigates people out of, the place that is after Donald Trump, the place that appears again and again, as in that Border Wall thing, that SDNY and the Post Office showed up arresting people.

I'm ignorant in I thought there were things called Jurisdictions. Like if Lee Harvey Oswald gets arrested in Dallas, that the FBI and US Attorneys in Texas or that region handle the case, and it appears before a Federal Court in that jurisdiction.

That is the way things were always done, but not any more, when it was not Washington DC overseeing a case, building a case or their local jurisdictions engaged in this, but it was Second District New York which has been busy in places like Florida. Maybe with so many New Yorkers fleeing to Florida, that New York thinks it has annexed that state, but thinking things and doing things does not do away with jurisdiction. I just do not get how things in New York from US Attorneys, SDNY, to the FBI are able to order other agencies around or just show up and shove other jurisdictions out of the way.

More On The Postal Service Spying On Americans

When the 15 USPIS employees exited their vehicles to arrest Brian Kolfage, for example, they may have been more interested in the data he maintained on his computers than on the man they came to arrest.  Also, when the warrant says “and/or other potential donors”, that likely includes all the data they could find.  They took it all.

We reached out to Brian Kolfage and he shared this:

The SDNY/USPIS knew that I had one of the largest donor data lists in the nation. They were monitoring my emails and saw everything we discussed related to these lists. The data I have goes back 15+ years of every single conservative donor and even some Democrats. The data shows who they are, where they live, their email, occupation, how much they have given and how often. This was the holy grail for them to have so that they could target people with ease.

Well at least we now know how the FBI and US Attorney's conjured up the information to hunt down Americans on January 6th, when Facebook and Citibank were handing over private data without warrants as it appears Patriot Act was sort of unleashed in a quasi form, as this massive data base of donors, was confiscated and has been used to flag and mark innocent people, in calling up their cell phones, their credit cards, and comparing them with events like going to rally on January 6th.

So Steve Bannon's group was targeted to get this data, and this data has now been weaponized, as it has been cross referenced in all of these Conservatives have lemon juice written DOMESTIC TERRORIST by their name, and only requires the flame of a future event to make this list a Bidencon enemy of the state law.

This information has literally been weaponized and it explains why when Sara Carter started inquiring and not getting answers in how CITI and Facebook were handing over information without warrants, violating people's rights, that the FBI ignored her inquiry and then shifted in their court filings to naming FBI agents and stating this was through "investigative snitching" that people were being located.

It was cover, as the FBI was not revealing what they had done in violating people's rights. It is interesting in they chose to weaponize the US Postal Service to pull this violation of the law off. SDNY sent out the posse, but the posse was armed postal workers to provide a woke degree of separation to what was taking place. The Post Office then in not being asked by Congress what the hell they were up to, was free to spy on Americans, not for crimes, but according to Gayway Pundit, "if they donated to legitimate causes or were prone to donate" by spying on their social media posts to make them as persons of interest.

This is an immense violation of the 4th Amendment. You have a Constitutional Right, to not having the police state gathering information on you, just because you are living your life, without violence. Just because some paid glow worms rioted on January 6th to frame Americans, and a very trained insider was planting pipe bombs to trigger the abuse of power by the FBI to hunt down other Americans, does not give the regime the right to snoop into your life or keep your name on a file, because you want America safe in a border wall.

There is now a data base in which all Americans are being cross referenced on and flagged as criminals when they have not committed a crime. Of course there is not going to be any check or balance in any of this, and this data is not going to be erased, nor are the postal gun carriers going to be charged with the FBI in a conspiracy of using the border wall funding to create a list, to match against a regime instigated riot on January 6th for political purposes of a national witch hunt.

The entire system is corrupt, but the purpose of these posts is not to change anything as nothing is going  to change, as all this is the 1% ruling above the law. It is simply informative to understand the planning of these operations and how this police state is exploiting the law in their motive of operation.