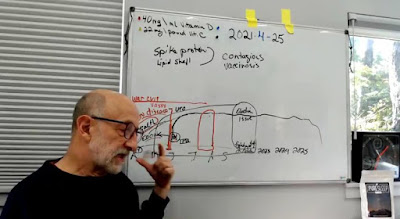 We have entered in the world of projections with the fiberforming of humans. Bright bunnies such as Clif High are data mining and assembling data on like projections. It is like if you picked up a bunch of junk and then threw them out in front of you, that you see patterns in the progression, and basing this on the reality that this stuff came out of your garage, you can assess what is in the garage. Assessing media and events, allows one to project cause and effect as events that seem not related, are actually related.

The reason I note Mr High is, he notices things in the webcrawlers and has an ability to assemble data into time lines with the like primates he is drawn to psychologically.  The reason I notice Mr. High is he is trending things from different sources which have appeared on this blog. Whenever I witness conclusions arriving from different sources and data, I know something is proof positive.
It is like the revelation that High states one of the cryptos always leads what Bitcoin is going to do. That means intelligent design is behind this, That means Bitcoin was not some invention by a geek, but was part of the cartel who ushered in the coin, in order to condition the populations to accepting a 1% way to rob you, order you and take from you money, and criminalize all those who buy and sell under other formats.

If you need that translated in simple terms. The Federal Reserve in the intelligence community for the 1% created Bitcoin and the other cryptos for a projection design of policy they will implement.

Mr. High has charts on a white board. Very good storyboard to keep the wee minds focused in this lecture. His time line begins in May and projects into September. His speculation is that this will be social order change, not war as we are in bio war and that the "aliens" dogma will be the new revelation in this period.

It may have been structured in more detail in a different time line by someone else.

That which is female will become male. That which is male will become female in the overthrow. It will be golden head and silicon tail. The lead will be grabbed and the domestic will be illegal as the orange trees fruit is the gravity of the fall.  Maia's bed will be sown and the cherry blossom bloom will have a solar glow. Quintilis will sow brimstone upon Elam as the griffin's perch melts as in the dog days of the twilight's last gleaming, Mesech will pour forth to the rising sun and Sinim will pour forth to the setting sun.

What Mr. High relates is the raw data of  vaxinosis, or the reality of people being made sick to exposure to the Vax Lepers. who are shedding the synthetic prion. It is that prion earlier that Mr. High thought infected cells, killed them and they shed. Now he ponders if the synthetic prions will actually make everyone exposed into sponge bobs or spongiform brains, or brains that have holes in them from Mad Cow or in this case all credit is due to Mad Fauci.

If a billion people vaxed will require a remedy, then the number will amplify in those exposed, but understand that bent prions are a part of nature. You do not die from exposure to them, but it has to be specific exposure. For example rabies is in animal saliva and it transmits when they bite, in saliva to blood transmission. That does not rule out saliva to mouth, saliva to eyes, saliva to someone with a skin disease or saliva to the nose, as this is a virus.  A prion though is a protein. If you ate a deer with infected meat, and it was cooked, you would most likely be safe. Eat the brain and you may not be safe in a sausage. The point is, if you ingest prions as that is the primary way this is spread through raw food as that is what happens with sheep, is that sheep shit, has prions, and the other sheep grazing end up eating grass and sheep shit.

In examining this in a flash read of the matrix, it appears these people infected from the Vax Lepers, are getting it through fresh feces and urine. That would mean public toilets or areas in schools or offices where the vaxed are moving about, and with their shit and urine hands are contaminated faucets, doors, and whatever else. As this bioweapon was being searched from the start in sewers, they knew it was in the shit, and the lethal L strain was feces contamination killing people, it is reasonable to conclude that feces and urine are the transmission points. This is like Asian Cholera or the Black Death, it is dirty people spreading this prion which was injected into them. Nothing dirtier than those who do not use toilet paper in the Biden invaders and all these filthy businesses, government buildings and schools.

Oct 10, 2019 ... As preparations for deer hunting season get underway in Wisconsin and other states, federal health officials are out with a new study showing ...

Oct 18, 2019 ... New research shows that a 40% bleach solution will kill any active CWD prions that remain on your tools after processing. Avoid handling or ...

Inactivation of Prions and Amyloid Seeds with Hypochlorous Acid

You probably read that in some poor orphan girls blog in the dunking of outside things for the bioweapon, and the same remedy is the start here to get the feces coated products from the grocery neutralized.

Just keep at this for a bit longer as the shedders will reach Darwin status in the projections of a few time cycles.