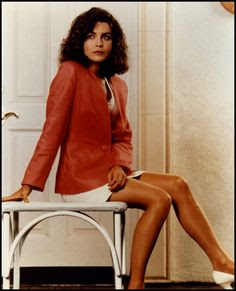 I never watched Miami Vice when everyone was getting wet and wood over it. Actually real Miami was a place that would have chewed up Don Johnson and shit out Edward James Olmos, as they laid fetal in the corner.

So on an impulse of needing something to watch, I obtained it on DVD, and honestly, the only thing that was interesting to me is the girl on the wind surfing board, dunking her hair in the water. She is in the opening credits, and dunks her hair on the 4th beat. The rest is cheap and  tawdry, which is what most Florida social class is. They all have that cheap greasy look, of thongs up their twat and sweaty breasts jutting out.

What is of interest is the number of actors who later became names guest starring on this show. If you wonder why you never hear of any of the cast of Miami Vice amounting to shit, it is because they are all horrid, probably chosen to make Don Johnson look like he could act.

Kim Coates had a bit part in the Viking Bikers from Hell and he was as always spectacular. He is the guy Bruce Willis kills in the Last Boy Scout after punching Willis. Coats is from Saskatchewan which puts him in a special place of the heart.

I simply do not see what 80's hair coke heads saw in Miami Vice. Sure the tracks are good at times i the music they found and I have featured a few of the songs from their tracks on here, but it is the supporting cast of guest stars which stand out, like Sonny Landham, you know him as Billy from Predator. Some episodes are really bad, like most are, but some have something going on for background noise.

Problems with this show are Magnum PI had the original and hotter red Ferrari., the original hotter and better Black guy in Roger Mosely. A better show was Stephen Cannell's Silk Stalkings, even if it was B grade.

The one plus was Don Johnson did not snort up the profits up his nose. Last I heard he was smuggling cases of cash to Switzerland. Good for him, but I'm still left suffering with this horrid show. Actually Jimmy Smits and I think it was Gregory Sierra were gone after the first two episodes and they killed off John Diehle, so they crippled the cast  and what is left is the props for the show in the guest stars and  the rock music.

This was a real waste and I think of what a good show it could have been with actors and writing. It was a waste as the 80's are buried and while the coke heads of that era who thought this show cool are the same smart phone tards who glom onto their current sewage are easily impressed as Obama proved, America is in rot and more Escape from New York, than something uplifting.

George Thorogood & The Destroyers - Who Do You Love - YouTube