America must rebuild the Temple and Offer on the 8th Day 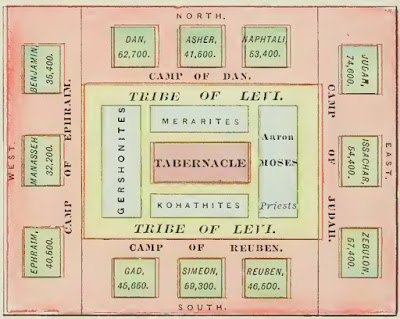 It is my hope that someone actually takes up the mantel and rebuilds the Temple as the Prophet Ezekiel was shown for the vision of the end times.

Beofre the first Temple, built by Solomon on King David's provision, there was the Tabernacle, the Tent, in which the Ark of the Covenant rested. Most people do not realize that the Israelites were tent dwellers for the first period of their lives, as was Abraham, Isaac and Jacob.

Lot got into immense trouble by going down to Sodom and living in the city when given the choice, as Abraham stayed in the tents and dwelt in a rural life.

When the Tabernacle which was made of skins, and some were dolphin skins, which is presumed due to durability, the Tabernacle was set up and consecrated to the Lord. It was at that time that the 13 tribes appoached and first made provision for the Levites as were dedicated to serve God and the Tabernacle. Six wagons and oxen pulling them were provided to this service., and at that point the Ark was annoninted and the 12 tribes brought their dedicated offerings to the Tabernacle.

13  His offering was one silver plate weighing a hundred and thirty shekels[1] and one silver sprinkling bowl weighing seventy shekels,[2] both according to the sanctuary shekel, each filled with the finest flour mixed with olive oil as a grain offering; 14  one gold dish weighing ten shekels,[3] filled with incense; 15  one young bull, one ram and one male lamb a year old for a burnt offering; 16  one male goat for a sin offering[4] ; 17  and two oxen, five rams, five male goats and five male lambs a year old to be sacrificed as a fellowship offering. This was the offering of Nahshon son of Amminadab

[4] 7:16 Or "purification offering" ; also elsewhere in this chapter

There was for a nomadic people chosen by God, quite a sum that the nations first dedicated. I will point out that the order of march was set with the Ark and the order of camping was set out specifically  around the Tabernacle.

In first reading this, I missed Ephraim, that would be the modern English, but they dedicated on the 7th day. Ephraim's brother, Manasseh dedicated on the 8th day.. That is interestting in they were the most powerful tribe in the coming Americans, and when Jeroboam took with him what would become the Lost 10 Tribes, he instituted the 8th day or Sunday Sabbath to keep the tribes from returning to Jerusalem and the Temple.

The tribe set of offer first was Judah. They would hold the Scepter until it passed to the English and the current royals of London.

Judah campted on the northeast and if you observe the order of offering, it follows in this camping order. It descends south, moves to the west where the children of Rachel or the English, Americans and Icelandic Peoples camped, and swings north to Dan, Asher and Naphtali.

If you look at a modern map of the Lost Tribes, this layout from the Mideast, to northern Europe and into America is still the way the modern Israelites are camped in their nations in a rough layout.

The sons of Rachel are still in the west.

The camping layout changed when the lands were divided by lots in the sons of Rachel then occupied the east and beyond the Jordan, and were the first taken into captivity and will by this be the first tribes in the Right of Return when Christ returns.

Offerings for the Dedication of the Altar

7 1  When Moses finished setting up the tabernacle, he anointed and consecrated it and all its furnishings. He also anointed and consecrated the altar and all its utensils. 2  Then the leaders of Israel, the heads of families who were the tribal leaders in charge of those who were counted, made offerings. 3  They brought as their gifts before the Lord six covered carts and twelve oxen-an ox from each leader and a cart from every two. These they presented before the tabernacle. 4  The Lord said to Moses, 5  "Accept these from them, that they may be used in the work at the tent of meeting. Give them to the Levites as each man's work requires." 6  So Moses took the carts and oxen and gave them to the Levites. 7  He gave two carts and four oxen to the Gershonites, as their work required, 8  and he gave four carts and eight oxen to the Merarites, as their work required. They were all under the direction of Ithamar son of Aaron, the priest. 9  But Moses did not give any to the Kohathites, because they were to carry on their shoulders the holy things, for which they were responsible.

10  When the altar was anointed, the leaders brought their offerings for its dedication and presented them before the altar. 11  For the Lord had said to Moses, "Each day one leader is to bring his offering for the dedication of the altar."

12  The one who brought his offering on the first day was Nahshon son of Amminadab of the tribe of Judah. .

18  On the second day Nethanel son of Zuar, the leader of Issachar, brought his offering.

24  On the third day, Eliab son of Helon, the leader of the people of Zebulun, brought his offering.

30  On the fourth day Elizur son of Shedeur, the leader of the people of Reuben, brought his offering.

36  On the fifth day Shelumiel son of Zurishaddai, the leader of the people of Simeon, brought his offering.

42  On the sixth day Eliasaph son of Deuel, the leader of the people of Gad, brought his offering.

48  On the seventh day Elishama son of Ammihud, the leader of the people of Ephraim, brought his offering.

54  On the eighth day Gamaliel son of Pedahzur, the leader of the people of Manasseh, brought his offering.

60  On the ninth day Abidan son of Gideoni, the leader of the people of Benjamin, brought his offering.

66  On the tenth day Ahiezer son of Ammishaddai, the leader of the people of Dan, brought his offering.

72  On the eleventh day Pagiel son of Okran, the leader of the people of Asher, brought his offering.

78  On the twelfth day Ahira son of Enan, the leader of the people of Naphtali, brought his offering.

In reading how Moses heard the Voice of the Lord, I will close with the revelation which I have offered previously, in the Temple is a perfect resonance amplifier of the human body in Euclidean math. It is pleasing to the eye.

There was not a Temple then but a Tabernacle and Moses heard God's Voice above the Ark, between the two Cheribims who covered the Ark with their wings. This was all covered with gold and like the Ephod, as a divination instrument. This Ark only worked for the few Levites it apparetly was built to communicate.

The Mercy Seat, the Holy Angels and the generation which God chose from His specific frequency breeding agenda to create a Holy People, a Set Aside People who were Spiritual beds to one day sow Himself after Christ with the Holy Ghost.

Once Christ died the Temple Veil was torn in two which shrouded the Holy of Holies where the Ark would be and only the High Priest could enter once a year in offering. Christ is the High Priest and was Emanuel, or among us, and there were no longer barriers and at Pentecost, His Spirit was pored out on all Faithful, and this is how God communicates with His children of Light from that moment on.

Enough of this building walls, tearing down walls, REBUILD THE TEMPLE for the return of our Lord and Master, Jesus the Christ. Amen and Amen

84  These were the offerings of the Israelite leaders for the dedication of the altar when it was anointed: twelve silver plates, twelve silver sprinkling bowls and twelve gold dishes. 85  Each silver plate weighed a hundred and thirty shekels, and each sprinkling bowl seventy shekels. Altogether, the silver dishes weighed two thousand four hundred shekels,[5] according to the sanctuary shekel. 86  The twelve gold dishes filled with incense weighed ten shekels each, according to the sanctuary shekel. Altogether, the gold dishes weighed a hundred and twenty shekels.[6] 87  The total number of animals for the burnt offering came to twelve young bulls, twelve rams and twelve male lambs a year old, together with their grain offering. Twelve male goats were used for the sin offering. 88  The total number of animals for the sacrifice of the fellowship offering came to twenty-four oxen, sixty rams, sixty male goats and sixty male lambs a year old. These were the offerings for the dedication of the altar after it was anointed. 89  When Moses entered the tent of meeting to speak with the Lord, he heard the voice speaking to him from between the two cherubim above the atonement cover on the ark of the covenant law. In this way the  Lord spoke to him.