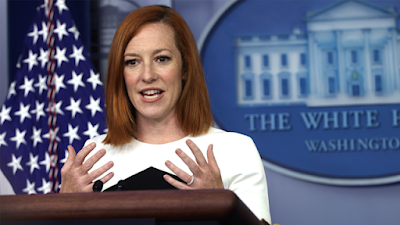 I tried milking my teats at work, but my children
prefer fresh milk from my nipples.

The Lame Cherry, speaking for women everywhere, implores White House Press Secretary Jen Psaki to reconsider her move to spending more time with her children, rather than putting her career first in speaking for Joe Biden.

For the second most beautiful woman in DC, behind Alexandria Ocasio Cortez, of course, to remove herself, after climbing to such heights above the glass ceiling, being able as a White Woman of Privilege to be accepted by genders of colour, is a testament to the great value of this fine spokesgender.

Surely Pedo Joe can work something out. When James Brady took a bullet for Ronald Reagan, President Reagan did not boot him to the curb, as Brady continued in his title roll as White House Press Secretary. Surely Pedo Joe would do this, in if Jen Psaki thinks that Tik Tok time is not enough close contact in this age of masks and social distancing, then Jen could still be White House Pressgender, and someone else could do the day to day stuff. Actually as Jill Biden does all the talking for Pedo Joe, the Lame Cherry suggests that Jill does the day to day stuff, and Jen can monitor things from, home I guess, as that is probably where her non aborted children are. It is a shame in liberalism that Jen did not just abort these children as it takes a village to raise a child, and it takes a woman to run the White House and Jen is that woman. Motherhood gets in the way of everything really, and I simply do not understand why Jen does not do like most liberal women who have kids, and just pawn her work off on others at work, and go to pretend soccer games and recitals as she kicks back in the afternoon with three or four vodka matinis.

Surely Jen Psaki is entitled to a new cabinet position too, Mothers Monitoring Covid, as she is a mother, she is monitoring and there is Covid, so she should have two jobs now in taking off from work, and like numbers of people working from home, we all can agree that the talented Jen can circle back to things to get answers while at home.

For that matter, I submit that the press must write all the questions down as that is what FDR did and it took him months to answer, so to help Jen out, the liberal press should do all they can to assist in her keeping her rightful job.

For lesbians, Jen is simply a pussy wetter. Those large breasts, large pouty eyes, large pouty lips, made the news briefings something to set your smart phone to vibrate. Have no lesbians suffered enough, in the genders who made them wince like Hillary Rodham Clinton and Michelle Robinson Obama, and now they have lovely Jen, and not have to fantasize it is.......well Jen when looking at HRC and MRO.

This is a sad day in American Bidencon, when a woman who made the mistake of not having an aborticide, is now denied her career, and Pedo Joe is not doing one thing to assist her in not just keeping her job, but awarding her a promotion to the Cabinet. I thought things would be different for liberals under Joe Biden, but it is the same old thing, in women make mistakes and who ends up paying for them, the woman, and not others.

America must go woke for Jen Psaki to save her from her maternal drives, and surely there are genders out there who would volunteer for hormone injections to produce milk from their teats if the children of Jen Psaki still nurse. Surely there are some liberal women who could volunteer to be a mother to these children so Jen could do her job. Surely there is some way for Jen Psaki to remain in her office and not be hindered by these archaic emotions and demands put upon women.

Let the Lame Cherry be the leading feminine voice as liberals are not rising in their voices to support Jen and that is a damning exposure of the failings of liberals who remain silent and not true to their abortion, feminist and gender advancement. They should be pointing out that Jen Psaki's husband is another failed male in not being able to support his wife, just impregnate her and the take advantage of her motherly instincts as he goes off and does that White Male Privilege thing.