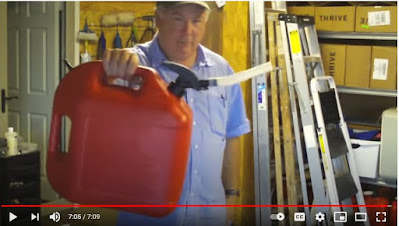 This is not my idea.

But this all started with a gas guzzling tractor that sucks up gas at 4 gallons an hour. You can see that farming is an expensive date, and diesel runs a bit better, but diesel tractors are 5000 dollars more than gas, so I figured I could buy allot of gas for 5000 dollars as diesel and gas are the same gouging Biden price.

The gas tank is 32 gallons. It drinks at 4 gallons an hour as I stated, so I get shy of 8 hours which is OSHA labor regs I suppose, but who the hell pays attention to that in the real world.

So I have 3 good five gallon plastic cans, which suck shit like all modern gas cans do and one that leaks some shit someplace as I smell gas. 4 times 5 is 20 and that is not 32, so I needed more gas transportation as I can not afford 300 gallon deliveries or afford to let gas sit and go shit.

So I turned to JYG.

Frowned on the cans, as they had the vent broke off and JYG said to put a shingle nail in there. That made me frown more, so with gas in the gas cans which was the color of Kamala's ass, and the sniff test said it was gas, I went online as I hoped there was a better way.

Checked the airplane mechanics..........they talk alot but do not know jack or shit.

Did a Duck Duck search and this dude shows up in the links, and as I was at home, and bandwidth is expensive, I loaded it up anyway as I was pissed as I think, ,even with two fish cleaning tables I wedged out of a pickup camper, laying on it's side, crawled in through the window, that I think 40 was too much today.

Anyway, JYG is reallly good to us, and I got like 200 dollars in pans for 20 so I suppose I have my days I do not do as well.

So this guy, and Richard and Stephanie will recognize this description, but dude looks like an older version of Big Hoss. Just has that weasel thing going on. I would that this guy was my cousin and not Hoss, because this dude does know jack and shit and shares the wealth.

He has like 100 gallons of gas stored on the wall that he rotates. Not even going to contemplate the problems of that if things went wrong, but that one Conservative used to sleep with 200 pounds of black powder under his bed as he was into black powder reinactments. Guess you live like that an things go wrong it is a quick ending.

So dude has this brilliant idea, besides cutting all that shit off your gas cans so you can use them and not bathe in gas. Dude drills a half inch hole in the vent area of a gas can, which is EMPTY, and using baling wire, fishes back through this thing.

The thing is a SLIME TUBELESS VALVE STEM. 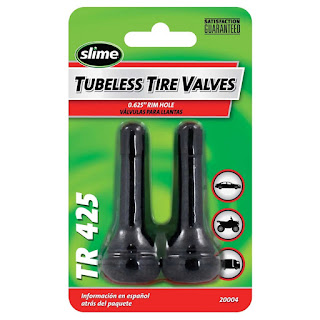 You take out the valve stem or it will not vent, and then pull it through the drilled out hole, put the valve cap back on, and when you use it, you pour gasoline like a 20 year old having drank a case of beer.

When we get back to town, I'm picking these things up, and fixing all of my cans as I hate this shit which is torturing Americans, and then I"m going to show JYG as I'm sure he has piles of these stems he can pull out of his wrecks. If he is nice, I will even fix a few of them for him. I'm quite busy though as JYG sold my little trailer I was eyeing. That thing sat there a year and as soon as I get ideas, he sells the damn thing. I mean f*cking eh all the way up to Manitoba on a winter's day.

Anyway that is my share, and I got to get this done and the tanks topped off with all this Biden Misery poring down on us.

OK million dollar fix and God bless the Hoss II for getting Inspired.

No it is not enough said, as I tried this Gaytube bullshit and what happened was, gas swelled these valve stems, broke them like match sticks and they went to pieces. OK and this was FUMES in the one gas can I had. This is bullshit and it cost me money, so do not do this.