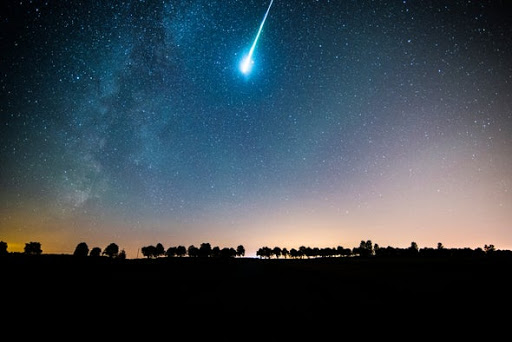 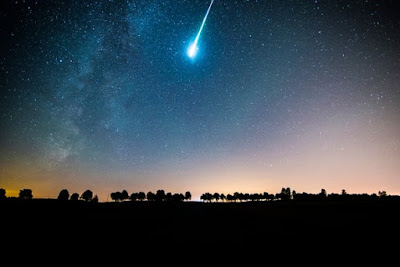 I was doing the final checking before bed, which means checking cat poo, lotion on hands, cats fed and watered and looking out the windows and doors to make sure things are where they are supposed to be.

As I stepped into the kitchen, I was looking north for some reason, maybe to put water bottles in the oven so they dry, but I noticed in the curtains a bright light. I thought, "Oh the moon", I did not have time to register that the moon is moving south in the spring, not the north, as it switches places with the sun, so I bent down to take a look, and then I saw it, this huge glowing ball of blue white light, with a hint of green tint to it. It actually fell slower than a meteor, and it sort of swayed in not falling in a straight line. This was the brightest falling star I have ever seen, as it lit up the night.

I had witnessed one a few months earlier looking south which was quite bright, but this one was about a quarter size of the moon. In inquiry in the morning, it appears this was some kind of space junk, which would explain it's swaying motion and that it burned out before it hit the ground. It was lovely to see though and I probably was the only one who witnessed it in the Brier Patch.

To me that is the problem with falling stars in they are so untimely and they never last as long as you want them to. This one must have held for five seconds which is long, and it resembled a flare in falling, but  there was not any smoke trail, so it was  a hunk of burning junk. It was just odd in I saw the light in the top of the curtain and it seemed to hang there for a bit, so it must have dropped closer to 70 degrees than following the curve of the earth.

I will assume when Wormwood and the fellow travelers arrive, that we will get to see them for awhile to terrify the human mob. I did find it interesting in the last mention of a big hit from space, that the Europeans were focusing on Africa getting the worst of it along with coastal Europe. That is what the quatrains pointed to, so perhaps the 1% over in Europe, know something of what is coming specifically.

I would think a big ass meteoroid, as something that big has to have a name between meteor and planetoid, so that is what I will call Wormwood, but to the point, something that big if it strikes the Atlantic, almost north Atlantic would be visible in most of North America. Justin Trudeau will probably worship it, but all the same, if it worked out in timing, it might be a few beer drinking moments in watching it travel from horizon to horizon. I hope it is not morning as I do not like getting up for world ending events. Meteoriods do not go good with my bacon and eggs. No it must strike before like 1 AM, not in winter as I hate the cold and I will not put up with mosquitoes. It has to appear so  I can watch it from my Grandpas porch, or a picnic table where we live or due to people being terrified of God, lots of people start donating to the blog and we will build our bunker, and then  TL and I can watch this from our porch or bay window. Two beers would be ok, red beer really, but this must not take too long as I do not want my beer to get warm. Fitting that time line, I will have about 1/3rd left, Wormwood will pass over, TL and I will contemplate it, say a few Inspired thing, sip beer, think silently, chug the last down  and say, "Time for bed", and be off to a nice night's sleep, as donations have proven, if I have trouble, no one gives a damn in Africa or Europe, so what difference does it make in what happens with those uncaring people.

With TL I have seen more falling stars than I had in all the years before. Sorry was just looking at the  wee baby  tomatoes and one is yellow, named Sunflower. Had no idea that was growing.

I now have to go check traps and then have spaghetti with TL.  Am thinking if we still have electric that TL could take a picture of us as Wormwood lit up the sky. That would be something to hang on the wall, but then everyone would have seen it, so it would not be like it was a novel event.