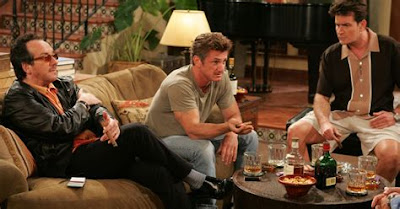 Both of you are losers and you suck. Elvis and Sean, what puss names.
As another Lame Cherry exclusive in matter anti matter.

I had honestly thought the worst episode of Two and Half Men was the tortured scene of Elvis Costello and Sean Penn, and some other things on screen. No matter what Charlie Sheen is though, he could not be blamed for the politics of his father Martin, of the troll behavior of his brother not wanting kids with Paula Abdul. Charlie Sheen though has always been an excellent actor, as he has some things which he has not worked out yet.

The thing is I was surprised that Charlie Sheen could do comedy as most comics can not do comedy........example Jerry Seinfeld, Julia Dreyfus, Jason Alexander in a one hit wonder that died.

The thing is that you could tell the last year that Charlie Sheen was on the show, he was just going through the motions. The last episodes focusing on his stalker Rose were memorable in his meltdown as a drunken man whore.

I honestly was pissed that Charlie Sheen was fired so I stopped watching after the funeral episode which really sucked, as Ashton Kutcher's ass and a joke about his big cock is not humor.

I ordered the complete series this past year under the coof as it was cheap, and as we moved through the Charlie years, we ended up with the last 3 Ashton Kutcher years.

OK I believe God does love Charlie Sheen, because God avenged Charlie Sheen......and make that Demi Moore and Bruce Willis over that thing going on, as what took place on Two and Half Men the last 3 years is revenge.

The first year, after they got done talking about cock size and showing ass, it went into Jon Cryer trying to be Barnie Fife or Dick Van Dyke in physical humor, which was weak. Year one was the beginning guest stars who were there because Ashton Kuscher could not carry the show the way Charlie Sheen could.

It all kind of blended in how bad year two was as Kuscher was not a man whore, but a relationship failure, while Jon Cryer had a weird sex relationship with a whorish woman, as they got rid of the kid and brought in the worst actress on the planet, in Amber Tamblyn who is a lesbian whore. Yeah year two is all sodomites, with the same turned up laugh track for no humor.

I'm more interested in how bad this series will end with, as we are at sodomy and group sex with Carl Reiner as an old pervert who wants child sex, or Grandma and Granddaughter sex.

Charlie Sheen had a talent to make things outrageous humorous and acceptable. Ashton Kuscher makes them boring, Jon Cryer makes them creepy, Amber Tamblyn makes them disgusting and the rest are just there.

I'm dreading the episode of Carl Reiner's bachelor party. It will be horrifying.

Anyway, the first years of Charlie Sheen are timeless. The rest are not worth the time. That is the nice part of DVD's in you just watch what is good and the rest just sits there.

Oh and the bachelor party was horrid.  Old men at a table doing old jokes in not able to deliver the punchline to make them funny.......but then even Carl Reiner would be funny with Charlie Sheen.