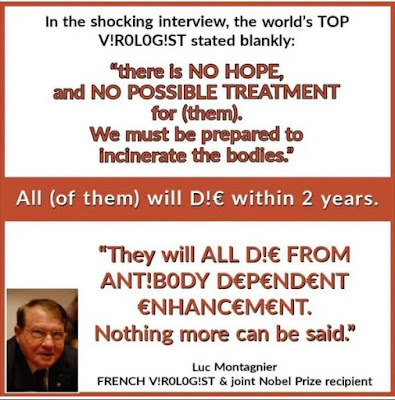 This blog has been whistling through the graveyard over the vaxed, as it has covered that different vaxes are creating different bug dish scenarios in different hosts, and a quarter of the hosts have been left "blank" as far as we know with saline injections as what is termed a breeder ground for the creature which is being embedded into these carriers. The theory is, that if there are 3 different vaxes, one triggers electro magnetism, one triggers clots, one triggers auto immune, while all with the synthetic prion rot the brain, that like autism overwhelms some children, all three of these platforms in one vax would most likely cause a cripple or a death, so the alternative is to give the vax, allow the vax to mutate in joining with Coronaviruses and then spread to others in a herd infestation, where 1/4 will receive this hybrid as a finished product, as thee entire vaxed herd becomes transhuman fiber formed.

In understanding that theory, and as a background, journalists like Jeff Rense who has done a superb job on this vax coverage in assembling and driving it, has mentioned that "They just would not have let something like this loose if it did not have a kill switch".

In whistling through that graveyard the Lame Cherry has held out hope, as there appears to be ways to stop the transhuman aspect, but that spike protein or synthetic prion is the forever problem.

In a flash read months ago, this blog published exclusively that this prion as in nature was passed through feces, blood. vomit and sex. I will project something in this though, it appears if you get shed on in prions, say breathing them in, it is more like an allergen that the body reacts to, the prions infest and kill cells and flush out, and the person recovers. It is different though if the prion is ingested and gets into the intestines as normal prions do, as it makes it's way to the spleen and lymph system to finally overtake the brain. Once this prion cancer gets into the immune system and brain, there is not a cure.

Luc Montegneir the French Nobel Prize winner who discovered HIV, has stated this, in the the super charging of the immune system and this prion will kill everyone who has been vaxed. Again there is a difference between being vaxed and being shed upon. And being shed upon in theory is different from eating feces, menstrual blood or vomit. When the Lame Cherry says "eating" it is the reality in studies which found that people do not wash their hands, and with shitty fingers touch door knobs, shopping carts, keyboards, cell phones, toys and contaminate large swaths of any work or public venue, which is how numbers caught the deadly Corona strain.

This prion gets into you gut, like all prions, it goes to the brain. If it hits the blood stream, the immune system attacks the cell and kills it, and it is flushed like an allergen.

Nobel Prize Winner Dr. Luc Montagnier, One
Of World's TOP Virologists Says 'There Is No
Hope, No Possible Treatment For Them...'

In this two year time window, in inquiry, this blog saw a trend in January 2023 AD in the year of our Lord, in which numbers of people were beginning to perish. If it is auto immune burn out or this prion which is 14 months to a toe tag, that is the 2 year window which Dr. Montagnier has expertly defined.

It is logical that beyond psychological changes which I have noticed in vaxed people, that more debilitating effects of this vax will appear. Logically with 5G there is going to be a spike as the different strains of this vax begin to combine. We have witnessed effects of cat and dog Coronavirus have infected humans and vice versa humans in animals. The barriers are coming down and I believe insect barriers are coming down too. This is no longer virus or  a prion, this is evolving into an entity and if the vaxed look into the mirror, they will see the organism, because they are the compilation of these platforms which is fiberforming them into an immortal hostage.

There is no legitimate excuse for the medical police state to have unleashed “vaccines” for the Wuhan coronavirus (Covid-19) when the jabs are known to create and spread “variants” of the disease, warns French virologist and Nobel Prize winner Luc Montagnier.

Calling the injections an “enormous” and “unacceptable mistake,” Montagnier is sounding the alarm about how the jabs are causing and spreading the Chinese Virus among both the vaccinated and the unvaccinated, which is going to lead to disaster.

It is not longer just Dr. Geert Vanden Boosche, but now it is Dr. Luc Montagnier who is confirming what Vanden Boosche warned of, as Dr. Tennpenny has been warning. The findings of one German blood expert is being verified by Canadian experts in why the clotting takes place in Astra Zeneca, with 1000 different derived proteins from humans. This is a hodgepodge of humans, a broard spectrum which would incorporate all of humanity in DNA in one vax, with nano particles controlling the clone and spread rate.

Stray proteins, Greinacher says, along with a preservative used specifically in the AstraZeneca jab known as ethylenediaminetetraacetic acid (EDTA), are directly responsible for causing the blood clots, he says.

Greinacher and his team identified more than 1,000 human-derived cell proteins in the injections that they believe are getting into people’s bloodstreams and clamping onto a blood component known as platelet factor 4, or PF4, where they form complexes that activate the production of antibodies.

This then generates an inflammatory response throughout the body, as the immune system is tricked into believing that it has been infected with bacteria. The immune system then overreacts and goes nuts, essentially, causing deadly bleeding and clotting.

Greinacher compares the way the injections trigger this otherwise dormant immune response to “awakening a sleeping dragon.” And all for a virus with a 99.9-plus percent survival rate.

Prof. John Kelton from McMaster University in Canada says he and his team have replicated and confirmed Greinacher’s findings

Given the data above, there is not a cure for this vax prion as this blog stated in inquiry. The Morgellon's "eat" this platform and build upon it. That is the "cure" In you can either become an immortal zombie slave or have your brain go mush. The Vax Leper will of course take slavery as they took the vax. It is the feces, blood and vomit transmission which appears to be fail safe for the 1%, as their transformation to immoral status has their own platform with adrenochrome, which the prion will not have effect as the prion needs brain fat, and the fiberforming is not tissue any longer, but a synthetic. Biological proteins can not infect a computer.

There is not a cure for the vaxed. Only another vax to enslave in progressing the process of the replication to stay off immortal rot.