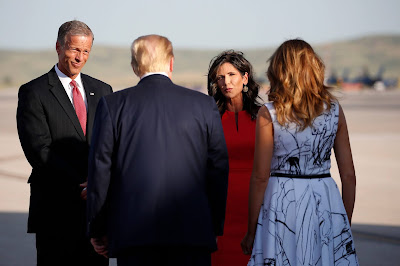 Of course we can afford this, as the money was in the school fund, and
your visit is educational, so would you like the 5000 dollar an ounce caviar?

I have regrets in creating Kristi Noem of South Dakota. I had hoped that generating prominent Republican leaders that were women would be a salvation to the party, but from that nutty Jamie Beutler and.......what difference does it make as they are all like Nikki Haley used tampon status as they looked good out of the wrapper but something just changed that now you don't want them around.

Noem has had a very Biden Time of It in trying to be Trump II. She was doing ok in attending GayPac, and then the sex freaks showed up trying to shower with little girls, and Noem listened to her big donors and it was Fuck Off Conservative South Dakota, as she was obliterated by Bushboy Tucker Carlson on FOX.

Noem tried to save her ass, by making Executive Orders, but the damage was done. Being from nowhere South Dakota, with the shittiest national politicians in George McGovern, Tom Daschle and John Thune, gives Noem that big show in her panties, but no one in the big picture wants to gamble on a state that has negative electoral college votes.

Noem is gambling though, as she now in her poor state is using state funds to fund her whore show for President.

Noem hired a Washington-area law firm, Consovoy McCarthy, best known for representing Trump in fending off efforts to investigate his financial records. Noem spokesman Ian Fury said the firm was chosen for its “expertise." Its contract is capped at $150,000, with the state paying $600 an hour for partners and $450 an hour for associates, according to Fury. He said the legal costs of joining the multi-state lawsuit over Biden's climate change order should be “minimal.”

Just so you know, Noem last year cut a program she started to protect wildlife, by paying trappers to catch and kill predators which kill baby things in nests. Care to wager how much Noem cut from paying people who work in South Dakota? Yes it was about the same amount that she is now wasting in promoting herself in stupid cases over fireworks at Mount Rushmore and Climate Change against Joe Biden, the pedo she intends to run against in 2024 AD in the year of our Lord.

Noem is playing it smarter in staying away from Tucker Carlson. She instead just does glam poses at FOX which is liberal and appears with Tick Tock Qanon Hannity, who is into gay things too. Noem is also the fave gal for Newsmax, you know the pro Hillary Clinton site, which is sure to produce good vibes for this new Republican in a new long line of Republican frauds.

You know how much I got rewarded in creating Kristi Noem Nothing. I didn't even get an offer of some buffalo steaks, as they got lots of them in that state, but little else as the politicians spend all the money. Noem even entered an oil battle with Bidencon, and South Dakota produces about as much oil as the moon.

I'm starting to think that Kristi Noem is going to be defeated in the elections next year. She killed off most of her people with the virus and the vax for Chinese slaughterhouses, and South Dakota looks like East LA with all those Goddamn Mexicans slaves buying peppers and fruit. No wonder they spread viruses as they shit like geese, don't use ass wipe and coat all the doors and carts with beaner shits,

I no longer really care as I'm out of politics as Kristi Noem is GOP norm. She stopped governing after the first two months in South Dakota and from then on she was running to be Donald Trump's second penis in politics.

Oh well, maybe the Mexican governor of South Dakota will do better as Noem brought in all those rich California and New York refugees and they know how to talk that beaner chatter and they all should get along well.

Oh one more thing. If Kristi Noem was an American, she would tell the Park Service to fuck off, and launch her own fireworks at Mount Rushmore and inform the Interior Department that if they don't like it, they can move those four heads to some other shit hole.

There is not any provision in the Constitution allowing the federal government to own land in sovereign states nor dictate how Americans can use their own land.

South Dakota officials said Wednesday they plan to build a security fence budgeted for $400,000 around the official governor's residence to protect Governor Kristi Noem. Noem's office did not give specifics on any threats, but her spokeswoman Maggie Seidel said her security team recommended the fence.

Seriously, this woman spends money like a crack whore. Seriously, she owns a gun, she can defend herself. Seriously she has her own state mafia of state police, who could be spared robbing people on highways and defend the vulnerable Noem which would at least have them doing something instead of extorting money for burned out tail lights which is the new high crime in South Dakota.

And by the way, this big spender, is a rancher. She builds fences. It does not cost 400,000 dollars to up up a 10 wire barb wire fence, tight as a fiddle string.
Noem and the highway patrol aren't doing a damn thing in shutting down Mexican dope cartels in the state or the free flow of drugs to Minneapolis and Chicago, so have them build the fence for a few thousand dollars. Electric fencers are under 200 bucks. I mean what the hell is this woman on, Michelle Obama spending sprees?