All of us think we will be remembered for something lofty, but there is a continuing reality in what filters people to the Lame Cherry blog, in every so often someone is searching for the "twirly girl on Mannix" and it just so happens that my being curious in who this woman is, produced the answers that a few souls every now and then are pondering who she was.

Perhaps me and the twirly girl have that in common, in some symbiosis, in people want to know who she is and the Lame Cherry has the answer.

That's who that woman was!!!

The woman was Thordis Brandt, a German American actress who started uncredited on Hogan's Heroes. Moved onto cult status as a serial murderer on Dragnet, and having not ever appeared in an episode on Mannix, achieved her perpetual fame, in one of the most seductive twirls in history.

I have a theory that I think holds water.
The blonde is an uncredited extra who never played a significant part on Mannix.
Having been a student intern on Quinn Martin TV shows, I know that series production companies pretty much used stock companies of extras (bit players / background players / atmosphere, etc) who were around the set frequently or all the time; often, "wild" footage would be picked up for unknown potential use, just in case.
I came across a Mannix fan site where the name THORDIS BRANDT came up on the same subject of the title dancer, but not followed through on. [monsterkidclass.horrorforum.yuku.com], and that's who I think it is. She appeared in an uncredited part in Mannix, season 2 ("Pressure Point") as Miss Hampstead.

She actually guest starred on a number of popular shows in the day, from The Fugitive, The Green Hornet, The Man from Uncle and Gomer Pyle. Her last uncredited appearances was with Raquel Welch in Myra Breckenridge as a whip cracking masseuse.

The great mystery woman, Thordis Brandt, became a nursing advisory after 1970 and is still alive today according to Wiki at age 81.

For all the things this blog does, what keeps getting searched for is who is the Mannix Girl. 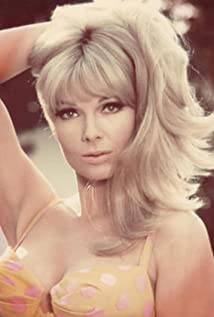