Mum Flips Off Driver - But she is a great mum! 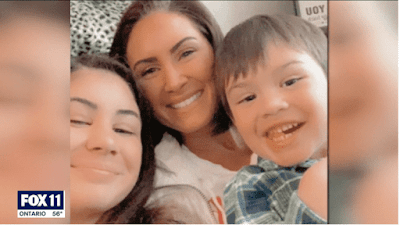 We are all supposed to weep for a 6 year old who got killed by being shot in the back.

18 hours ago ... Six-year-old Aiden Leos was strapped into his booster seat in his mother's vehicle, as she drove him to kindergarten when a white sedan cut ...

A woman, above, who looks like she got something in her like her oriental looking kids, was cut off by another woman in traffic, to which the headline below reveals a bit more of what this innocent family did.

6-Yr-Old Boy’s Final Words: “Mommy, my tummy hurts,” Moments After Road Rager Shoots Him In Stomach In Response To Mom Flipping Off Driver Who Cut Her Off

Yes we have a woman driving in traffic, and having a male passenger, which again sounds like they got something in them from south of the border or equator, cuts off a woman driving her kid to school, who then having not one thought about the safety of her kid, STARTS  A ROAD FIGHT.

Yes imagine that after an Obama Soros Buffett, Biden year of terror in America, people who are shown by the FBI they will not be arrested for skin color, and are let free by the US Attorneys in the Department of Justice, pull out their illegal pistol in gun control California and fire a few rounds at the people who just said FUCK YOU to them.

Yes we will not have those pertinent details in this story and of course the mum will not be charged as she should be in domestic violence, because if you fight back in this arena, you get charged just like the person beating your ass.

So this mother got her kid killed, that is the fact, but we are all manipulated into thinking she is some victim, just like this 6 year old boy. Yes "Mommy my tummy hurts" sounds like the kid who is a momma's boy and grows up to be the prick at the bar drugging women and bullying the boys.

Two weeks ago I had an asshole, two assholes pass me for going the speed limit. One passed in the turning lane, the other passed me on the shoulder edge. The one with the U Haul trailer, yes a U Haul passed me on the shoulder, flung a rock and cracked my new windshield. You bet that bothered me, but there is nothing to do about it, as where is a cop when you need one eh? But I did not start a road rage fight, even if I was armed with more than a baseball bat.

Like it or not that is what you get when you get people with the 3rd world in them. They cock off and can not behave with liberty.

There is not going to be justice in this, as the mum in this was prostituting the daughter in the family, letting her post about getting who did this as her brother was such a great kid.

People who have children and flip people off in other vehicles are not raising great children. Add the vax and you can and will experience more of this shit.