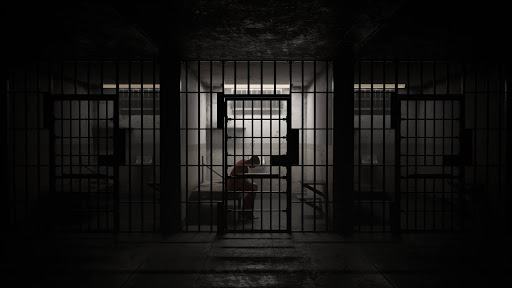 So far, more than 400 people have been arrested in the nationwide manhunt with more charges to come, and at the same time, emerging evidence proves law enforcement allowed protestors to enter and remain in the building.

The absolute measure of any civilization is the treatment of it's prisoners before and after trial and with all the Constitutional protections for Americans, there is a glaring reality that the Soros Buffett, Obama Intifada terrorists as the 6th column, behind the Mockingbird media are criminals above the law, as they do service to the 1%, while Americans are literally being tortured.

There is not a necessity to remind people that Muslims were treated after 9 11, with Korans, time outside of cells and special meals even at Gitmo, but Americans are being deprived of Rights and tortured, in a modern Andersonville.

Last week, Jacob Lang, according to a text message sent to his mother on Sunday, was placed in an empty cell for at least 14 hours as punishment for advising other detainees against accepting plea deals. (Only one person has so far accepted a plea arrangement. All other defendants have pleaded not guilty.) According to the message, shared by his father to me, Jacob had “no water, nothing in my cell, no chair to sit, no blanket, no Bible, no toothbrush, no toilet paper . . . and no human contact.” Jacob said the water is brown and comes out “in chunks.”

All of this is deliberate to break these people who have no rights. This reminds me of abuse of Lawrence Sinclair, who Barack Obama ordered Joe Biden to silence over Obama having had sexual relations with this man. Biden's reward for torturing Mr. Sinclair which included his being lost in a DC jail without access to necessary medications and legal counsel, and using the Delaware Attorney Generals Office run by Beau Biden to threaten a life sentence on trumped up charges.

We now know that 400 Americans have been hunted down. We know that not one Department of Justice US Attorney, not one Homeland agent, not one FBI agent, has protested the abuse of Americans. Instead besides the "minor" tortures of placing Americans into beds with cockroaches crawling on them, guards in federal prisons so seriously beat an American, that he may lose his eye.

Prison guards “instill fear” in the detainees, Metcalf said. Ryan Samsel, behind bars since January, allegedly was beaten by prison guards who handcuffed him with zip ties. “He has definitely suffered serious injuries, including a shattered orbital floor, a broken orbital bone, his jaw was broken, his nose was broken,” his lawyer said in an interview last month. Samsel, she said, is currently unable to see out of his right eye and may permanently lose his vision.

The question is in this torture, what is the reason that the United States federal government is banning Americans from engaging in conduct by their leader who advocated there being peaceful, their rendering unto Caesar the things which are Caesars and God which are God's, and to not draw their swords. Would not this be the ultimate reform for these accused dangerous men and women?

Why would a government engage in torturing people to make them more abusive and then take away all reforms? Remember that Donald Trump with the Kushner's passed reforms for prisoners and yet what is taking place in US prisons now is the same abuse which Blacks, Hispanics, Asians and Caucasians have suffered for too long in the United States.

Yordy Kahl rots in prions for defending himself against federal agents who attempted to murder him and his father, and they did murder his father.

Leonard Peltier is in prison, convicted of murdering FBI agents at Pine Ridge, but the fact is he never murdered anyone, he knew who the murderers were and refused to talk.

None of that is blind justice, but an entire agency treating humans like a commodity, selling it's services for bigger budgets as prisons are full of the contenders against the 1%, the street dealers who do not give their cut to the Wall Street franchises so they end up in prison as Soros and Buffett trade those billions for profits of the elite.

The jail allows them to leave their cells for an hour a day. Religious services are not allowed; they can’t exercise and access to personal hygiene such as showers is nearly nonexistent, according to defense lawyers and relatives I’ve spoken with.

It is wrong what is being inflicted on Americans. There should not be a comparative argument that what is going on in American law enforcement is as horrendous as what takes place in Ankara, Tehran, Tel  Aviv, Pynongyang, Moscow and Peking. Nom de Deus, the British are slowing torturing Julian Assange to death as a political prisoner. Ghislane Maxwell is being wasted away in the same political theater as those who hold secrets against the state are brutally made examples of.

The reason these issues are examined here is the one reality which weighs upon my heart and Spirit, and that is would any of us being left to rot in prison, not give anything to not be forgotten, to have our conditions brought to the public's attention, so that in our plight, we would have a chance at justice in a rigged system where no even a billionaire like Donald Trump can afford Rudy Guiliani's legal bills.

America is now a caste system of elites by appointment, as closed as the British, and which protects a pedophile like Prince Andrew while hosts of others who appear to have the criminality of Saxon Whiteskins are in their own Towers of London being tortured.

America has devolved into a Tower of London torture chamber and in the silence of federal law enforcement, federal executive and the few muted calls by Elizabeth Warren and Dick Durban in the Senate, designed to peal off MAGA voters for democrats, there is now the reality that the United States is not Ronald Reagan's shining city on a hill. It is just a neon light, flashing enticements for Mexicans to become slave labor as the twilight's last gleaming for Americans, is the bawdy glow of what really goes on behind the prison doors.