The Corona Dead with Water Cremation 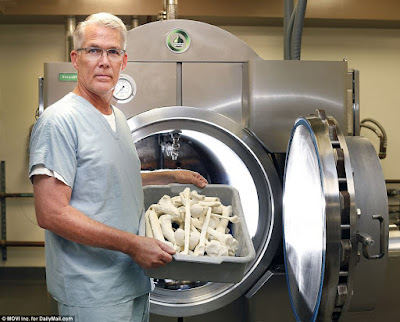 Yes Gram put up a good fight, but we got her rendered down
to a package to help grow your garden

As you have probably not heard of this, Minnesota  for the past decade has been dissolving people in water and flushing them down the toilet, in something woke called "water cremation".

You should probably figure out with billions dead from this vax, and most of them Americans, that the 1 % can not deal with turning all of them into crude oil. The answer is chemical burning of human bodies.

May 11, 2021 ... Wisconsin Senate approves 'water cremation' for human use. Bill allows dead bodies to be dissolved with lye, poured into the sewer.

(The process may go by another name in your area, such as bio-cremation, resomation ... Alkaline hydrolysis is a chemical process that uses a solution of 95% water and 5% ... Wisconsin, No law, Wisconsin does not currently have any laws or ...

The Cremation Association of North America describes the process as "a water-based dissolution process for human remains that uses alkaline chemicals, heat, ...

Nov 12, 2017 ... Most people are buried or cremated in traditional ways, but green burials and green ... It uses water, potassium hydroxide and pressure to accelerate the ... Minnesota, east of the Twin Cities and near the Wisconsin border.

Yes this is wokeism gone green which it is not, as chemical burning of bodies is not something that fish can live in and the fact is adding dead bodies to the sewers is just asking for a new cholera outbreak as Robert Rodale of Organic Gardening stated that you can create pesticides by crushing up bugs into some water, letting it set, and the natural killing diseases of these bugs, will ferment and spraying this toxic potion on your cabbage plants will kill those bugs. You put dead people into sewers and the things that kill humans in plagues, will replicate there and spread.

In Europe they have something even more "green", as in Europe you can get Gramma turned into freeze dried powder, just like freeze dried coffee. Yes you just super freeze Gramma and then give her a rough ride and Gramma grinds herself into powder.

One form of green cremation is resomation, also known as alkaline hydrolysis or liquefaction. It uses water, potassium hydroxide and pressure to accelerate the decomposition process and reduce the body to bone ash.

Resomation is not available in Wisconsin. It is offered by Bradshaw Funeral and Cremation Services in Stillwater, Minnesota, east of the Twin Cities and near the Wisconsin border.

Another alternative to cremation is promession, which involves freezing the body in liquid nitrogen and vibrating it into a powder. It is available in parts of Europe.

No one has said what all these mountains of dead White People in powder is going to be done with. Will it be a new mountain in the Alps where Muslim Africans can go ski down slopes of powdered dead, or will the Great Lakes in America fill up with a third of a billion dead Americans clogging up the waterways in vax dead.

You now have the information, but what is creepier in vaxing people to death or turning them into bloated mush is a disturbing thought but so many of the 1% trolls are carrying out the mission while normal people cringe.