The Genius with a Degree 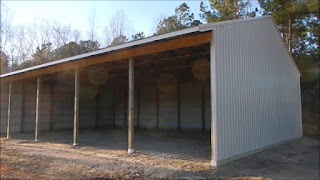 My Grandfather did not leave much in this world, but a quarter of land. He left no debt and a good name, and a place as old as he was.

So when the wicked uncle took over, I was never over there again, as he was being a smart ass in thinking he could jerk me around, and I won't be jerked around. For his smart mouth, he surrounded himself with assholes who actually crippled him up. That is a price to pay for being a smart ass, and only attracting the worst people who take advantage of you.

I was checking Grandpa's pole shed today, as that is what I do, and I got to looking inside of there as wicked had decided to park things in there. That has upset me as Beloved Uncle had built that shed's interior for working cattle. He cut up haystack frames, made gates, panels........and they all disappeared as wicked tore them all out, for his shit.

So he dug down so he could back the tractor inside......instead of driving inside like a normal person, that way you would not have to dig to China and rip rafters out with the top of the tractor as the fit was too tight.

That is when I noticed today in the pole barn, that he he had cut poles out. Now for those who do not know of such things, the reasons the poles are there, are to hold up the roof. So wicked cut out two main poles, so he could park shit in there. I was looking at his road grader blade support with bolts and just shaking my head, because as near as I could tell by eyeball measurement is he could have fit the tractor in there without trying to bring the roof down.
He complained the roof leaks.........well jack shit charlie.....why do you think that is when you stress the roof and it pulls all the time on the nails holding the metal on, because you cut the poles out!!!

When the place is ours, I will fix this, like a shit load of other things this buffoon brought ruin to this place in doing a fucked up job, but God needs to get going on the making this is our place before it is all torn or falls down.

I am just stunned that some jackass would do this, but then as I make TL laugh, I imitate the wicked one. He has a habit of sticking his hand up, before he delivers the sermon on the mount, with this low growly voice of, "When I was doing that......" and it was always wrong, wrong and more wrong.
I have mentioned his jack shit ideas, in telling me how to do things around here........they would fuck up, I would then fix things the right way, he would shut up, and be pissed off in being made a fool of in being a half tard, and he would be plotting other shit in revenge.

He honestly reminds me of the Mother, who always had to have things done her way, and it got to the point of wasting my time in the things going wrong, that she would shut up, and I would do it right and then it would get done. I really would like God to give me 100 times that time back in good things yet in this world. The world can burn down, but I would like to ...........cook things that Stephanie does in enjoying myself a bit before Paradise.

Well as I type this, the Blue Jays are raising hell. That is new, as wicked hated jays and shot them all.  Now they just vent their frustration and carry on with living. I hope we "uns" here have the opportunity to get our venting done on our place, as I will not be shooting the neighbor's cats or the Blue Jays.

As I close this, I think of my other cousin, who was bitching about how stupid wicked was, as he spent a fortune on the house, moving things his way. Yeah as she said, air does not blow at 90 degree angles. Yes he moved the heaters where they can not heat other rooms and he moved the AC where it can not blow through the rest of the house. Instead his stoves burned his dry eyes and his AC was on so loud that you could not talk or watch television. He was a real genius as his raised hand sermons proclaimed. I know different as I see the buildings leaking, the walls caving in, and all we are going to have to move around again, to just get this place back to the normal Grandpa had it.

I will just say Nuff Said, as I see more stupidity daily in his legacy and wonder how someone with a college education can be this Goddamn moron........yeah no Holy Ghost, but God makes it easy for me, and I just am stunned when I see this kind of stupid.