The Order of Chicom Battle 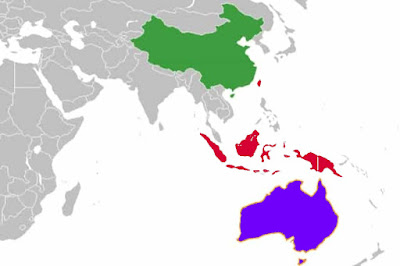 I would desire that you study the above map, because this is how the war footing in Asia is progressing. In news releases, the gambit is to pull China away from Formosa and have China fight sea battles in the South with Australia, in an attempted landing there.

We know this that 1940 is repeating as the Chinese are being suckered to the same adventurism of Japan. In this case, even on land, while Japan hit Korea and China for land resources, with the removing troops from Afghanistan and the strong Iranian link, China is being pulled for oil resources on their Silk Road into the Mideast in that direction, and is being pulled southeast into the ocean.

Why are Australian officials hinting at war with China? - CNN

1 day ago ... The Australian government's words may reflect real concerns about the possibility of a Chinese invasion of Taiwan -- a conflict that could ...

The key areas are Taiwan or Formosa, Philippines and Indonesia. China has huge problems in Indochina as those peoples from Vietnam to Cambodia are all militant. China faces a German dilemma with Switzerland, in even with 200 million armed Chinamen, just where do you waste forces, as each island must be held and Japan withered in that duty.

This island ring is also a series of choke points to destroy Chinese supply. Of course Australia is no match for China, but Australia has already stated it will fight on behalf of the United States. In this Australia is become China in the proxy war America carried out against Japan in the 1930's.

Now for the Charles R. Smith assessment as his was astute. China's Navy is incompetent. It's carrier jets can only fly for 15 minutes. Chinese war machines are as bad as Chinese faucets leaking in the United States. The only thing China did well was using up troops in combat on land.

The ridiculous sea maneuvers the new Chicom aircraft carrier engaged in, had it's escorts chasing Americans, while the American warship parked off the Chinese carrier and laughed at it.

As this blog has stated, China is best suited to container ship invasion, and landing record numbers of troops into Alaska and Australia, and then scavenging, but it is incapable of projecting power. India smacked China around the past years in combat, and China has ability to invade a land of monks in Tibet, but this is not a a fighting force for projections of power. It is why China does not invade other nations as it is not capable, but it is being lured out.

China's best possibility is being lucky. If China got lucky in biological warfare, if the power grid went south, if it got lucky in cyberwarfare, if it got lucky in weather, if a series of events took place where it created beach heads in Australia and Alaska, and into Iran, China then has to hold that land, and that means supply lines and they are vulnerable in the Khyber, the North Pacific and that Island Chain of perpetual mining.

China will have to project crippling power to the United States and Australia, because while Alaska and America being shut down, strangles Japan, the reality is that is thousands of miles projection to be maintained. The entire situation is China will have to expend 1/3rd of it's resources to take regions and 2/3rds to hold that ground, and that leaves nothing to fight a war as the United States and Australia are not going to sit around and allow annexation.

Australia leadership mentioned something which it should not have, and that was the space platform of warfare in this China War. China is moving and appears to be deliberately fucking up space in causing a domino affect in tumbling debris which would take out the American Star Wars, which would be a major lucky shot by design. Takes the satellites from America and warfare ends being technological and becomes a delaying action. China has cards, but those cards are in need of traitors like Obama  and Fauci to help China put it's head on the chopping block to be cut off later by it's comrades.

China is really every antagonists friend and China is every protagonists enemy.

In all honesty, the war China should fight is with Russia, but Russia has a nuclear force and the technology to fight China, but the Russians will use the atomic failsafe to save themselves, but in sheer wearing numbers, China without pressing Moscow, could probably take the Russian east for settlement, using it's assets of too many Chinamen, a short fight arena and the ability to resupply using Russian resources.

If China could accomplish this, then maybe it could use Siberia as a jumping off point to move into Alaska and be successful there. Otherwise without the 1% laying a trap for China in the oceans and Muslim passes in helping China get there. China will collapse eventually on the battlefield which is being ordered for it.