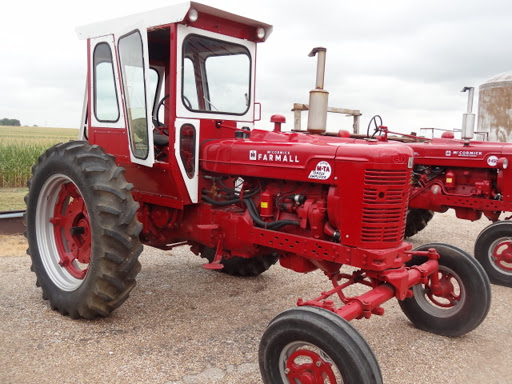 The Gun Shop Guy asked me to do an update on the Super MTA which we acquired for the do it yourselfers out there and this is that update, and yes it did take this long.

First, most of you do not have access to my cousin Jerry, by marriage, and he is shirt tail relations in we are cousins by a few degrees of separation. There is one phrase I hear over and over again, and that is, "Jerry can fix it" by everyone and he has people coming from long distances to have him work his blessing.

I was talking to JYG this past week and he said, "I had this truck and I didn't know what the hell was wrong with it. I couldn't fix it, so I got Jerry, he came over and blessed it, and it started running". That story is not far from what this most special man does.

The knowledge he has is immense. Today when we were in there, he was showing me his engine. It was an engine from like 1914, and gas, and of course he is going to fix it. He told me the originals were painted blue, but then they switched to green, and when I asked him about the old Champion spark plugs, he stated telling me that Mr. Champion started a company, from the start of time, and the investors threw him out, so he started another Champion company, got sued, and in the end change the name to AC for Albert Champion.........now you know where AC Delco came from. Jerry knows this stuff, like he knows magnetos, starters..........I took a Super M starter into him, he put it on a lathe and did things to it, and it worked.......and Jerry does not charge 150 dollars an hour. When he first ripped into this MTA carburetor, I asked him what I owed........he said 40 dollars. I said does 60 sound better, and when the tractor would not work, he came out, spent two hours with me and followed me into his shop, where upon we learned the brake was smoking and on fire as it stuck, and the front wheel was missing two of three bolts.

So when we got in there today, he was telling me, "I just could not figure out why this tractor would not run. I took the distributor off and fixed that, I had the valve cover off and adjusted them, and I was about ready to put a different carb on there, but I thought, "Maybe drill out that needle valve port to the throttle tube, so I did that. Made it bigger (He said the exact measurements) and it has been running ever since.

He also previously in the needle valve, could not get the graphite packing to seat in, as the threads were bad, so he used some asbestos packing he had, and that is how he fixed that.

He then went on and said he put bolts into the front tire, got the sediment bowl from leaking (Said it was warped and I could get a new one for 20 bucks), was telling me I could tighten the steering up by cutting a notch in the pinion and was telling me he shoudl replace the brass washer on the fuel line as it was leaking a bit, got the brakes loose, and they were full of dirt and shit literally, and said 60 bucks was the charge. I said 100 sounds better, he did not argue and I said I appreciated what he did.

He had been driving the tractor around to test it. Put air in the tires, and was telling me how to deal with the hydraulics on the loader and how I could lift the loader so the bar on top would stop banging him and me on the head. Was amusing in the tractor had to be moved, and he got on and parked it. I think he liked the tractor and was a bit attached to it in all the TLC he put into it.

What I do know is that you are not going to find answers for this on gaytube, and that includes Rachel in her good videos, as this kind of stuff does not fix on it's own or in books, This is the kind of stuff where I touch it, it stays not running, but Jerry touches it and it runs. I will give credit to the Holy Ghost that He told me it was probably that needle valve a few days ago, but I would not have known jack or shit how to drill things out, the right size as my idea would have been to just back the needle valve out ,but Jerry I think said it was maxed out and would smoke if it was unscrewed further.

So in that, what do you do when you are related to a 70 something year old genius, who when he is not around, there is not going to be anyone who can fix things as these tards from schools now are fucking morons. My neighbor had 150 dollar an hour whizzes for this John Deere and Case tractors which have these Goddamned computers and warning lights which come on and no one knows what the hell it is. One time it was the battery was going  bad. Another time the kid tore off an entire system, but in a new one............damn tractor still did not work, so they put in the old one. I think the neighbor said he paid 1500 dollars for a GPS fix that still did not work.

I couldn't get Jerry to come out first to fix things, as he did not know who I was, and then he asked me the second time, "How is it the Cherry's are related to my wife", and I explained and from that point on he has been gold and tells me stories and we both relish them. TL told him today he was the Tractor Whisperer and by God he is that, and he liked the compliment.

Jerry told me I had too much stuck into this tractor, but this tractor will run after an EMP. Frankly I would like to find a used carburator which I will just in case as with the shit all melting down, maybe you children should have some spare spark plugs and other things too.

I'm not finished pestering the Tractor Whisperer. I need a roto tiller blessed and he mentioned he would sell me an old Ford pickup which his wife would like to have not be a lawn ornament on the driveway. This too will be good for EMP, can be worked on, and Jerry of course will help me get it running and it will run, and not the kind of fix that zonks out when you need it most.

I would that I had been able as a child to work for him as the things I would know now would be priceless. I would that I could record for online media the things this man can teach as he knows everything. He is a treasure to humanity. I just have to learn and try things to, as the guy I purchased my 50 dollar wheat seeder offered to sell me a H tractor for 500 dollars, which will fit nicely with the buzz saw which he sold me for 25 dollars. As that Farmall was in a shed and not parked under water for the past twenty years, it probably will start with my dinking around with it in putting gas in and changing plugs. Those H tractors are the most amazing implement ever for not using gas an being able to be a platform for all kinds of jobs that stopped people from working themselves to death.

My best advice in these old tractors, that is the letter addition Farmalls, John Deeres, the Fords is they need spark and gas. You check gas and if that is there, then you check spark, and it things are not working yet, then you start working your way inward, in carb kits and new plugs, distributor cap, points, condenser. You do not screw around with needle valves or idle screws, you just make sure things are clean first. You keep working slowly to the bigger stuff, and that is where manuals on how to fix things come into play.

Look for the kind of things a person needs to survive these tractors were built to run on shitty gas, to be neglected, dirty and abused and still function.  The MTA met it's match in a millionaire liberal democrat who had it parked in the swamp hole he called a mansion, and it just started deteriorating in even the rubber hoses started to rot. The thing is Jerry said my carb was not as bad as another rust choked one he was working on, yet mine was the learning curve even for an expert who had seen it all.

I do not have a picture of our tractor, maybe later, but the above I found from Texas. Man the jasper who scavenged an International cab and stuck it on that MTA must have died from the experience as Texas is HOT. Be like crawling into a 500 degree oven with Aunt Mabel beating a dish pan over your head as the noise and heat from a cab would make you deaf and cook your brains out.

Been there, done that, but I would love to have a cab like that as it would be comfortable in Arctic cold.

Oh one more thing and this is something I do know about. Farmall tractors have a nuance about them. People cuss ethanol, but you never freeze a carb up with burning ethanol as that is what HEET was. You always had to have a bottle of that around in the autumn as the carb would frost up. This always happens in a freak of temperature, when it was high humidity and just below freezing, but not in the teens. The air sucked into the carb cooled it off and moisture would condense on the outside and it would be white with frost. If you had a hot kettle of water to pour on it, that would work to defrost it, but what I did was, I always had a tarp cut for each side of the engine and held into place. The engine heat would warm things up, and you never had that freak frosted carb day. Usually happened in the first snow or ice storm.

And yes on the Honey Do list is to purchase an MTA and H repair manual. I know both tractors, but it helps to have direction when the Tractor Whisperer is not around.