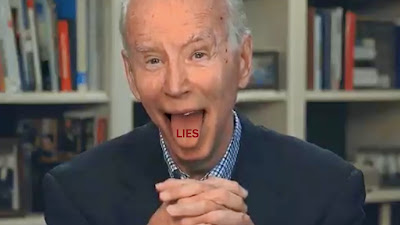 Recently Resident Joe Biden, went into another of his propaganda diatribes, which is a polite way of saying that senile Joe Biden is void of historical realities or he is a liar.

The issue was Pedo Joe stating that the Second Amendment when it was passed.......

Sorry, we must stop there as the Second was not passed, it was part of the original 10 Amendments to the Constitution which those Founders demanded against the day when they knew federal police would be hunting down Americans as on January 6th for having police tape or a despot would be attempting to infringe on American's Rights to keep and carry firearms.

Those Amendments were ratified above any law, as they are above all laws which any legislature or executive order creates.

Pedo Joe continued on his false statements that there have always been limits on weapon's ownership and who could own a firearm. There are no limits on who can own a weapon and there were no limits on what weapons they owned.

When the Chicago Gangsters of the 1930's were shooting each other with Tommy Guns which are full auto Thompson Sub Machine Guns, they purchased them through a store or the mail.

Before the 1968 Gun Control Act, ANYONE could order any gun they chose through Sears, Montegomery Wards or JC Penney and have them shipped through the mail.

Farmers used to purchase dynamite for blowing stumps for local merchants. Jimmy Hoffa's Teamsters used to buy the same dynamite easily in their war against capitalists.

Those are just a few examples proving Joe Biden is either ignorant or a liar. There are no limits in history on any weapons, and that includes cannons, which you still can purchase legally from reenactment venues, and wonder of wonder, no one is using them to attack banks or anything else, because Americans do not do such things.

Pedo Joe went on to say when you attack the Government to make war on it, that you need an F 16 or a nuclear weapon. Pedo was not clear if he was advocating nuclear attacks by Americans on Washington DC.

In that, the Second Amendment was designed not for hunting or target shooting, but as the last safety check against tyrants and the police state. That is what the Founders provided their progeny and that provision does include F 16's and nuclear bombs. You may not like it and you may disagree, but that is what the Consitution provides for too, in not 1968 Gun Control, but for Americans to do stupid things like banning alcohol, and then when they discovered that disaster, passign another Amendment to make alcohol legal.

See America is a place which makes it legal to be stupid and dangerous. Because then other laws come into play. You harm someone from your being stupid with a gun, or you leak nuclear radiation from your Biden atomic bomb, well you get arrested and executed for that. America does not ban Rights. America punishes violations which harm others physically, like murdering Ashli Babbitt. 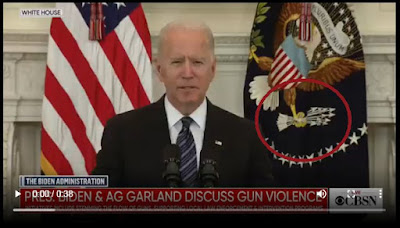 So this political tyranny of Resident Biden and Attorney General Merrick Garland over gun violence when more babies have been aborted and more murders with vax needles have taken place than in gun deaths is the fact in this. Pedo Joe can stage his propaganda, including the thing which most of you missed, in someone in Bidencon  deliberately hung the flag behind Pedo Joe to show the eagle clasping weapons in order to use them, in sending the message that Bidencon is going to make more Ashli Babbit's as they expect the FBI to be sent out to slaughter Americans. That is what those clutched weapons on display are meant to convey, Again this was deliberate.

Americans have rights and they are being destroyed for this past generation and it continues on. The facts though prove otherwise in Joe Biden does not speak the Truth.