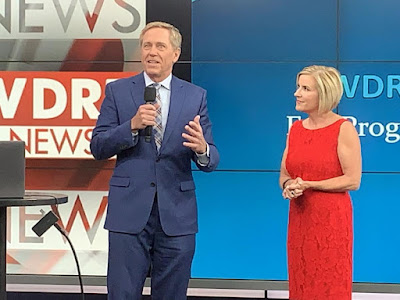 They fried a fucking egg on my Prius it was so hot!

I hope you can follow the photo below and the explanation as HAARP fascinates me in this Bidencon era with the Chicom PLA in what it does.

We all know that a mega drought has hit thee American West. Reservoirs are empty and salad food is being depleted deliberately. What I follow a great deal is thee American Nuclear Missile Silo interior for studying radioactive dispersion in war or accident and have catalogued this in the creation of weather bombs to collect radioactivity and make it fall out on less populated areas.

For background on this, thee American West has been in the 100 degree range for some months. This heat has creeped into the Rocky Mountain slope of Montana and the Northern Great Plains into Canada. There appears to have been a huge High Pressure blocking all moisture for a week and this super heated high began drifting to the East Coast. As you can see in the screen grab below from Friday June 11th, where there was not rain in the central United States, suddenly there is rain in the East Coast.

This entire drought period has show Texas deluged daily. That is part of this rotation in a blocking High. Texas gets rain and most of the US does not.

It is the Montana area which fascinated me, as in this high heat, Montana was getting moisture, into Alberta Canada. The same held true for Saskatchewan and Manitoba. Two moisture patterns emerged this past week in this location, and just sat there moving north into Canada.

On Thursday the 10th, this Montana blob formed and it was moving again into Canada, but then in a CIA Yahoo forecast I caught something strange where Underground and other sites were silent on any weather or mentioned only a few tenths of rain.

Around 10 PM, I noticed an alert in this super heated region, and it stated, at 1 PM that it was going to start raining in the Dakotas, Iowa and Minnesota. I checked the radar and nothing showed except the Montana blob. There was supposed to be another drenching around 4 AM, and the forecast was calling for heavy rain and thunderstorms. This was only CIA Yahoo.

I checked at 1 and 2 AM and no rain was falling where it was predicted. Then at 5 AM, thunderstorms appeared and it started raining.

The screen grab is a 2 PM photo of the weather on the 11th after the rain. You can see the blob is near Montana and has not moved, but notice the bow of rain has moved around 400 miles and is still moving. The Montana blog should have moved too, but it did not. There were no other systems operating or generating, so this rain originated from the blob which is again impossible except for HAARP. 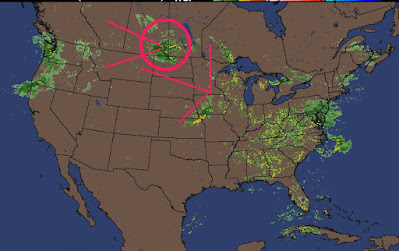 The only weather cast which got this right was the CIA at Yahoo. They were plugged into HAARP in the Weather Mods.

In tracking conditions in this region, it has been very hot. Crops have been failing as they have grown in a few days what normally takes plants 6 weeks to reach this height. If you remember the old adage of Corn Knee High By The Fourth of July, that is from this region. My data shows sprouted corn in this hot period almost reached knee high in a week. Fantastic heat unit growth.

The rain which fell was one to two inches and was a billion dollar rain, in saving Bidencon from paying out for dead crops in federal crop insurance. If it had not fallen, these crops were on the verge of being wiped out in this region. The wheat is in very poor condition. Again someone is shorting wheat as a food crop while growing soybeans and corn, which feeds the Chicoms and the ethanol industry. HAARP is taking care of it's masters.

The analysis of this is, the 1% degraded the wheat crop. It is growing the corn and beans and speeded up the process in this high heat index, and has watered the crops to whenever they turn on the tap again. The weather pattern is again cooling to normal temperatures for the next weeks into the 4th of July, after this heat plume was generated.

It does seem that the Weather Mods are watering the Pacific Northwest for the next weeks and this seems to be destined for the interior in rain showers again to help growing plants which need an increasing water supply. That will help the situation some in the West, but the 1% apparently did not like Montana dust so they have been soaking the area down, while other areas are fit for only Chicom consumption

As you can see, drought in America is a figurative  term as it is not the "West" as most areas are not dry, but just a few very dry regions, as if someone drew a map for this. 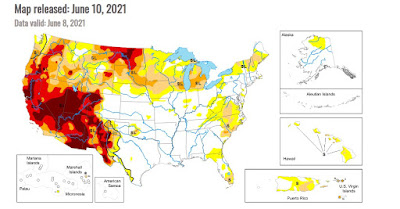 And if you compare the two maps, you will see why the Montana Blob is blobbing over the Minot nuclear missile range, because it is in severe drought and the Weather Mods had orders to dump rain in this specific area for 24 hours, if perhaps not longer as this blob in Montana was parked there for days.

This region of the Northern Great Plains is having high winds from the west, which is trademark of HAARP creating a Lo pressure (rain) and the depression sucking in huge amounts of air. This air though is not 100 degrees from 100 degree regions, it is instead Chicom crop growing 85 degree weather.