Pyramid Math after the Vax Death 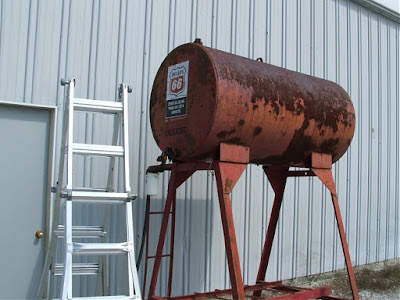 It has occurred to me in carb talk that Sandy is married to a genius who knows how to fix things. If only h would adopt me, then I could just dump things off there and not have to learn things, but Chad has more sense than that, so this is a lesson for all of you in how to deal with things in the world reset.

I have mentioned that my cousin wanted some fuel tanks. I did not think it would be running on Day Seven for them, as I planned and wrote of six days and then rest, but that is not the case as we met the rock and the hard place.

300 gallon barrels have minds of their own, and when they must be elevated six feet, in tight quarters where a tractor will not fit, you really have to start Egyptian pyramid stuff in the old ways of doing things.

I never liked math, and always used a tractor, but this is your lesson in moving things when things will not move.

Your tools are a block and tackle or a come along, pull straps and chains, and planks.

I first tried the high wire act in balancing on the tank stands, and using the rafter for a hoist mount. Not a good idea as there was not enough room to get the tank high enough. So the tank goes back down and we start the second part.

Using shit on hand, I tried to 2 by 12 planks. OK I mounted to the side of the pole barn and as I cranked up, the boards started slipping up and that was a disaster waiting to crush me.

Remember the angle part as that is important and vital. The original angle probably was 60 degrees. I found some rotten boards which were close to 16 feet long, and decided to try a part two in this,

Part two found me rolling the tanks up the plank and jamming a chopping block on them to hold it so I could hook the come along hook to the straps and chain. I did not want to use a chain on the pulling, as I would have to then unhook it, meaning hook up another come along to hold it in place, as that was another looking for an accident to happen.

So I started ratcheting it up, and I had to do about 4 pulls, then lift the tank and move it straight to walk it up the planks. It of course pulled crooked and to the side, but I took my time, and slowly started making headway.

The Holy Ghost said to prop up these rotten planks with some rotten saw horses, so everything was braced pretty good and nothing cracked.

When I got to the top, I had to really be careful and put down other short planks just in case the barrel did a nose dive as I was not having that failure in being that close. A pry here, a nudge there, a figuring out that the planks were holding the barrel up in their own leverage and in a few minutes, I got the barrel settled and with a little more prying got it seated where it should be.

My planks were probably closer to 45 degrees and this is the secret in this. It is mathematical I'm certain, but it has to do with load weight being lessened and increased by angle. I never thought about it until the existential experience, but the ratio of weight declines with an incline and increases with an incline.

That may not sound right, but  at zero degrees which is flat, the barrel is heavy to move. At 60 to 90 degeres the weight increases in effect, because you are moving it on an increased zero degree incline. Think of it objects are heavier pushing them up hill.

There is a miracle though which happens with block and tackles, in they increase your pull and lessen the weight by a fraction, They also in suspending an object on 30 to 55 degree incline, actually make a heavy object lighter. By placing the barrel on the incline, having it hooked to the block and tackle, I was easily able to shift the barrel an move it with a minimum of effort. Friction on the ground is another factor in 3 planks 12 inches wide, do not have the same glue as 8 feet of dirt.

In something which educated me further in this, the long planks actually became levers once the barrel was above the stand, I could not figure out at first why it was floating inches off the stand, as I thought I perhaps had ratcheted it up that high, but instead the boards were leveraging the barrel up. or in other words, the barrel suspended on a cable because lighter and the boards were able to leverage it.

The boards weighed around 30 pounds, the barrel around 250 pounds. The boards should not have just on gravity weight along been able to move it up, but once the come along had the weight neutralized, the boards were then weighing more than the barrel.

Somewhere in this is Coral Castle stuff and Stonehenge. You can make heavy shit do allot of things it should never do, if you just understand how to neutralize weight and then divide it by degrees.

I have to do part two tomorrow, as I spent part one in learning and I was too tired to load the second tank, which was an additional problem as it has to go over a 12 inch lip. The solution by the Holy Ghost was to put in a wooden post, which fit snug across the member, and then put planks on that. With the degree of the come along in that ratio in pulling from above, I will be able to nudge it up an over with a pry bar...........of course NEVER getting under or behind it, in Go forbid something breaks loose.

I would love to have a skid steer, but until people start donating, that is a dream and a prayer. JYG told me I should get a CAT. Online they say Gehl makes the best skid steers, while Bugsy just loves his Bobcat which would have made easy work of this tank lifting in short quarters. I did try and think who I could con to come and load them, but that was a dead end, so it was back to Pyramid Math which is now used to educate you, as this is important in hoists, winches, block and tackles in loading people into graves to moving things which would ruin your back.

As I'm not Jesus who gets things done in six days, I need seven and will rest on the eighth or at least recuperate in doing some filler until my body says it is time to go on another adventure.

I get that done, and then fuel can be in the tanks.