I have no intentions in getting involved in politics again. I have though a responsibility to the friends of this blog and the poor, who really are poor and can not afford more than their expensive cell phones, their, their internet and all those other wonders which I do not have. The responsibility is to pull the people back from this Qanon Phase II which is pulling you in on emotions.

This is like the past dozen years of military operations, which began with Ulsterman and moved onto this multi phase Steve Bannon, Qanon, Cuckserve Treehose to dominate the message those on the right were hearing, and setting them up for January 6th, to have them scattered and hunted down, to repress their political voice, and concentrate the political message into the hosted few paid in the DIA's Mockingbird few.

This blog in showing the Booger picking on FBI Director Christopher Wray by the DIA in not revealing the had a Chinese defector was more emotionalism for the MAGA to cry in prison and cheer themselves that Wray was humiliated. None of which does anyone any good, but this is but one aspect of how people are sucked in.

I will state that Donald Trump has a purpose and that is rhetoric. But just remember you GOP is now fag at 55% you are  told, so just contemplate if you really want to be led around by a group who has Mike Flynn's brother getting Pacific command, while Mike quotes God and tells you to sign up to his new group which is mostly FBI agents.

Qanon II is generating and Steve Bannon with Trump are the platform in these election recounts which could have been done in December 2020, but now they are being done in 2021, which is a reality of how can you trust frauds in 2020 who are now your saviors?

Trump tells you to be vaxed. That is great idea when there is growing evidence that this vax is toxic and Anthony Fauci is a mass murderer. So do you really want Sodom Don, Quanon Don, Din Do Don for four years, really the person you want representing you, as Speaker of the House Don is floated to draw people out.............same House and Senate Republicans who were against MAGA, and I have yet to hear Louie Gohmert reveal who was telling him the CIA had a computer farm in Berlin which set off MAGA on January 6th.

The Lame Cherry really is not seeing any saviors in this anywhere, just a group of high paid Edward Lansdale psychological manipulators, and with that Don John has agreed to a Truth Tour with Bill O'Reilly..........yes what Trump needs is someone else on stage to make him look like he can not handle telling the world how corrupt it is.

Call this Weak as Water Don, and if you noticed in this, which you have not, Failure Don shut down his webpage.............and where is Donald Trump's Twitter Facebook super page he promised all of us? It seems like what it is, Donald Trump saved himself, has been issuing DIA propaganda which has silenced Americans, and Americans are still being hunted down for January 6th, as Don is silent about that.

3 days ago ... Former President Donald Trump and former Fox News host Bill O'Reilly are teaming up for a conversation tour. Organizers are calling “The ...

You probably do not remember that Bill O'Reilly the mouth for hire, sounded like he voted for Barack Hussein Obama.

In fact, Obama tag teamed with O'Reilly on Colbert's CIA show.................Obama was giving O'Reilly press and standing. Yes they were comrades on the trail. Once again, do you really want an Obama voter setting the record straight in 2021...........anymore than you want a democratic liberal named Michael Flynn speaking for you, after the smartest man in the DIA was supposedly set up by the FBI to set off Russiagate?

Then there is this other Bill O'Reilly, the one who beat up his wife and the one who was trying to fuck anything that appeared on the FOX news stage in that whore house brothel. Do you really want this as the face of your Republican Party?

Bill O'Reilly's Ex-Wife Said He Dragged Her Down A Flight Of ... 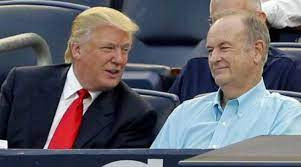 ..
Apr 5, 2018 — The world already knew about Bill O'Reilly's long reign of sexual harassment, including propositioning producers and guests for sex;

This is an advanced operation of psychological manipulation and it has to be something you have been seared to as you have seen the easy tricks and figured them out from Bush Fam.

You are being warned to not go anywhere near this stuff. This is not the group of Ronald Reagan. Hell the only genuine kid of Reagan was Maureen, the rest are toadies and trolls.

There is a line in the Revelation of Jesus the Christ, COME OUT OF HER MY PEOPLE. That is out of Babylon. The message here is, if you do not go down to this troll farm, then you are not going to have to come out with your ass cheeks spread.

Trump sold you out to the 1% to save himself. He is still earning his freedom and is why SDNY is holding grand juries, to force him to play this psychological game, whose end product is more of your heads in the FBI noose when other things being staged will break.

Stop being one dimensional. You have Christ so you do not have to belong to political parties to be validated nor empowered. There are events which are planned which will bring things to each of your doors. You have noticed a lull and the reason is for you to hunker down in your nest, so when the next blame and awe takes place, you will hole up and wait for the situation to overtake you. So do not get involved in this and you will not become someone of interest.

See what this is for what it is, and do not go near this.