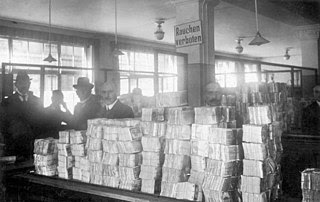 In the advent of Adolf Hitler coming to power in Germany, the greatest driving force which brought down the Government was the infamous Wiemar Inflation. When Mr. Hitler was ushered into power, one American Dollar was trading for several trillion German Marks.

The reason for this was the British, French and Americans had levied repressive war reparations, and along with the German debt for the war, it could not be paid. The answer for the industrialists, bankers, military and aristocracy was the ruining of the German Mark. Billions of dollars in debt, could be erased along with the German middle class savings, by massive inflation making the Mark worthless.

Making the Mark worthless meant that billions in debt was counter balanced by trillions in Marks printed.

Read that last one and understand it.

When the FBI had a few bitcoin deposited by "pipeline hackers" into their personal server, those few coins were worth 2.3 million dollars. That is not 2.3 trillion yet, but it is going to make it with inflation. The reason is like the Wiemar. The 1% will get away with the quadrillion they stole. Americans not vaxed out of existence will be wiped out of financial existence to become wards of the state. And it will be all wiped out for a few crypto coins, for a new war to loot all the gold not in the 1% vaults.

This is how it will be accomplished. It is obvious in knowing the German history.