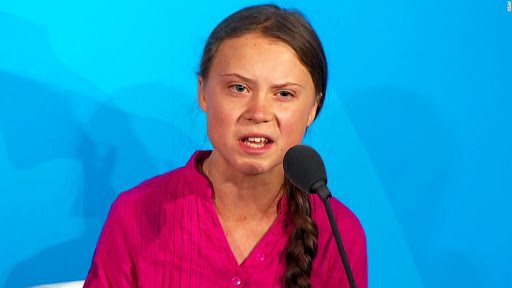 Honestly I have never heard Greta Thunberg talk or watched her. The following video of her and then being trashed by Australian media is something which just is troubling.

I was trying to figure out why she speaks with a British accent like Woke Harry as she is Swedish or something. Apparently that David Hogg and her both have the same genetics in acting like they are having cell phone withdrawals if they do not have not texted in the past 10 seconds. Thunberg looks like she is having a stroke. Women who have had breach birthed Siam twins do not convulse as much as this thing does.

Thunberg reminds me of the genetically tard baby chicks that the farm cats eat, because they are too stupid to stay with the hen. There are people who applaud Thunberg and follow these genetic devolved creatures and that is troubling as Thunberg thinks she will get to keep her patrician lifestyle when the 1% are done with using these trolls. She has not any animal instincts to recognize the real predators in the planet, as her fears have her phobic about success which she bathes in, in the blood and shit of armies who saved her people from Russians and Germans, so her own leaders could Islam the people to erasure.

In Darwin terms, Greta Thunberg and this woke generation is the devolved product of deliberate inferior food, an exposure to the same psychology and Pavlov reward. Thunberg is a Holstein cow which survives to be milked but is incapable in a real environment of living on twigs and avoiding the wolf.

This is a capture of a devolved human generation. They literally are retarded in every DNA aspect. Normal people seeing themselves in a display like Thunbergs would be humiliated and never appear again. Not the woke though. They just keep perching on the wire never realizing the cat has been put into their cage by the 1%.