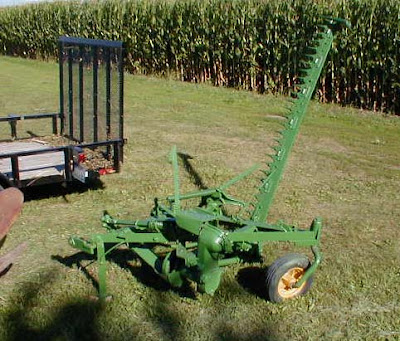 So the evil in this world arrayed against Christians has been providing me with some very long days.
Our neighbor had a bunch of old equipment his dad had and was started out as a 50 dollar grain drill, became an offer to purchase a Farmall H tractor with John Deere mower for 500 bucks. I will get to the story in this, but background is important for all of you who sit in luxury and have new things and hire things done.
So the kid calls up on a Saturday as we were just leaving for town. So we go over, put in gas, put in a battery, and the tractor did not start. The offer to help get it going was one of his walking away and messing around with his camper.
So we left and would come back the next weekend when he was not home, as I figured I could put in new plugs, it would start and I would drive it home. It was a hot bitch that day too.
So changed plugs, one was rusted in, switch was on, battery was up, but the gas had dripped out mostly, but nothing would fire.
So I had brought along a cart to pull the narrow front tractor up onto it and pull all home.
Pumped the tractor tires up............damn mower tired was flat and leaking air bad.
So the tractor would not pull on the cart, so it was pulled out, air still not in the tire, so we unhook the mower, and TL pulls me home 5 miles on a hot day.
We go back Monday, I have to take the entire rear mower assembly off, the bitchy woman who lives in  a trailer for some reason she is there, her small dogs attack us, and she calls them off.
Tire to town, Goddamn Highway Patrol cruises past in front of us. we turn the other way, drop tire off, and he pulls out and pulls some other poor bastard gazelle to prey on him.
So we get tire and tube............80 bucks. Great China policy there.
So we put the tire on, put the hitch on, and John Deere sucks shit in mowers having one wheel and a labor intensive hook up to drawbars.............hitch will not work.
Go back on DAY 4 of this shit, as I try a new method of come alongs, chains and hooked to the pick.............nope John Deere sucks in that will not work, scuffed the pick up though.
So the Holy Ghost suggests using the 2 wheel cart, putting the mower front on it, cranked down with come alongs, and pull it home that way.......with grease pumped into the rear tire spindle so I do not burn that off. Forgot the grease gun.
So Day 5, we are back over in the heat, jacking things up, putting the cart under the draw bar assembly, cranking things down, and it is not what I wanted, but I ask God again for Holy Angel help in getting this home as I'm worried all night that this mower being top heavy will tip the cat over and it, onto the highway which would really suck, if it pulled the bumper off too.
But considering all the work in the heat to take off the mow bar, I figure test it out.
TL walks behind as we pull down the driveway. Nothing moves. We take a drink of water and away we go.
Of course a "lake person" speeds up on us, will not pass, with their 50,000 dollar boat, as they glare at us, and I put on the turn signal, turn onto the gravel and homeward bound we go.
I check things in a mile when I turn the corner and nothing as moved too much, so onward we go.
Another half mile and I get this in front of me on the road. 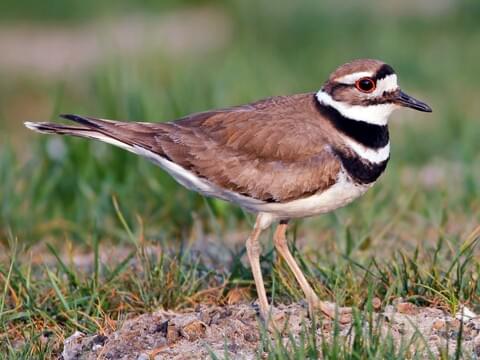 I can't recall if these are Golden Plovers but we call them Killdeer. Grampa hated them for some reason and shot them. Well they are annoying in screeching at you and pretending to be injured to get you from their next.

Well we had two of them playing dead, and the reason was they just hatched out baby killdeer. Four of them. That is a great hatch as they usually  only do two, so either two hens hatched out at the same time or this hen was really the egg vent this year. Good choice as a drought year grows chicks wonderfully as no dew means the chicks do not get wet and cold.

So of course you do not stop when you have a precarious load hitched up as it might tip over, crash or find other ways to take 2 hours to get right again, but out of the pick up I go, chasing baby killdeer of the road.

3 go with the first adult and I get them off, but of course the other adult goes the other way and there is this little shit going the wrong direction and back across the road where I figure they hatched.

Of course a vehicle is coming, thankfully it is a putz farmer who turns to his yard.

So I give chase and could have caught the bugger, as I never held a baby killdeer fresh out of the egg before, but I chase, it the right direction. adult is playing dead screeching, and I head back to the pick up with TL..........see another vehicle coming from the other direction and the stupid chick is back in the road with the adult.

I tell TL that I'm not going back that way as I do not want to see dead birds. Last I see the adult and little one are now moving toward the ditch again on the correct side of the road where a field is.

Of course I notice something looks missing on the mower in a spring and it is gone, but it must have always been gone...........so back I go over Killdeer Lane and nothing is visual. They got where they wanted to be which was emerging corn they can hide in and do what killdeer do.

I know if this was not TL and me, those birds would have been dead as people do not slow down for anything. They can't see shit except their Goddamn cell phones. Me I save things. I also stupidly put myself into jeopardy this mower could have shifted and flipped over and there I would have been for hours trying to get that Goddamn thing right as John Deere makes shitty equipment.

I know God sees the Good He moves me to do. Granted it is expected of me in a world full of shitty rich people, but all the same, I do not see many rewards other than satisfaction that I did something good for this world instead of destroying everything like most people do.

I'm a selective assassin. I killed two raccoons, another predator and a Mud wasp, so I do kill out out of necessity as wasps can live outside but not sting me in the home, and predators kill things to live, so I kill them to keep my things alive as that one bastard ruined a chicken nest.

I doubt God wasted 5 days on this to save those birds. It was just an opportunity to do something good in choosing to do good, as I thanked God for His Holy Angels keeping that mower from disaster, as I have had too many in this line of shit months.

The kid is responsible for this in the destruction, because he is rich and has it all. Tires go flat because someone does not get their lazy ass up and pump the tires or move the tractor. The one rear wheel is shit and leaking fluid, because he never moved the tractor for years. So the hub is rusted the tube is shot and I have to try and find a way to not spend 1000 dollars another another fix because rich people are lazy assholes.

For those rich people protesting.......another tractor we got, cost more than we paid, because the rich democrat genius built his house in a swamp and the tractor had lichens growing on it. Ruined the carb, ruined the tire, tube and hub, and that gem took us 2 1/2 months to get home. And something is still wrong with the charging system as there is some sort of direct short as the battery goes dead.

Oh and the millionaire, I discovered when we changed oil.........he had already broken the cast part which is threaded on the fill tube and I had to use extra leverage to get the Goddamn drain plug loose. I mean it is a DRAIN PLUG! That is what happens though in rich people feel weak, so they crank down shit like bolts and break things. Can't get your shitty children to like you, so Goddamn it, going to make that tractor obey me.

I take from all of this, as I still have to carb kit the tractor that I had months wasted of my time, but 4 baby killdeer got looked after. I came out ahead as rich people use the same wrenches on their credit cards in they can't get them open to donate either.