The Putrid Rancidicity of Federal Feudalism 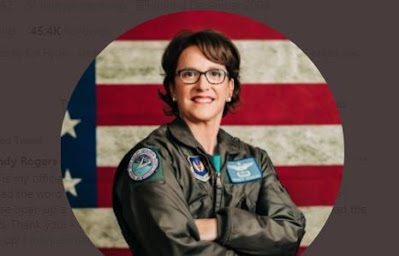 From a Constitutional reference point, the announcement of Attorney General Merrick Garland to intimidate States in their redistricting, voting and audits is chilling. In historical context, the United States has passed laws, created Executive Orders and become involved with the DOJ on minority status matters.

What is different with Merrick Garland is he has targeted over half the voting population in America, meaning 100 million plus, in not upholding the law, but making it more easy to break the law in stealing elections, and those States which have all legal authority to conduct elections or audits, are now being intimidated by the Justice Department. This is the first time in American history that the majority has become criminalized, unlike the Southern voting laws which barred the Negro form voting who was in the minority. 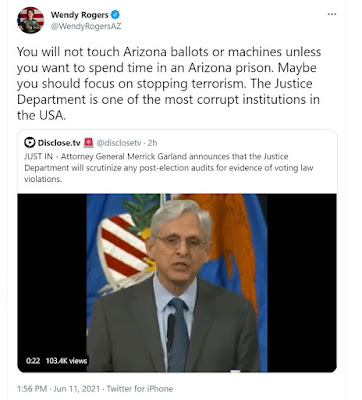 All Americans had hoped in the promise of the independence of Merrick Garland from Pedo Joe Biden, and the Attorney General's promise to not just prosecute MAGA on January 6th events, but all groups, has instead revealed a motive of operation from this DOJ which was as corrupt at Eric Holder for Obama or William Barr against Donald Trump.

Mr. Garland now has 500 Americans having been indicted for January 6th. The only murder from that date in Ashli Babbitt has been covered up in the officer's name has not been released. The only mass criminal event of the FBI pipe bomber, has the FBI not finding this trained military individual and not releasing all the video recordings. In like manner the, US Attorneys are not releasing for discovery by defense, thousands of hours of video from January 6th which would show the police invited people into the Capitol and were working with the rally attendees.

Now the Attorney General has taken the plunge in intimidation of States, meaning the People of the States who are sworn to examine and audit elections which are irregular and enforce laws which stop vote fraud. This is most chilling by the DOJ and it is intended as such. In the circus act which has become the DOJ, in calling people terrorists for having police tape at a rally and calling people subversive for opening their own businesses in a plague, the logical step in this is the DOJ will indict leaders in Arizona for "election disenfranchisement" in another over the top charge that by investigating vote fraud it kept people who fraudulently vote from breaking the law as if being an illegal or being paid to harvest votes is legal.

The reality is if Merrick Garland is so interested in vote audits, why then is he not asking the FBI which over protests from Homeland Security in Georgia seized fraudulent vote ballots and then destroyed them. Destroying evidence of a crime is a crime and the FBI engaged in that to defraud the 2020 elections and the right of free and fair elections, but Merrick Garland has not shown any interest in any vote fraud which is all over Youtube and in the archives of Gayway Pundit and others.

The message is clear in this. The ruling elite desire to steal elections. They desire to rig elections by overloading illegal voters to offset legal American voters. They have accomplished this with Obama flipping 10 million GOP votes twice, Ted Cruz gaining bizarre victories in Iowa and then losing bizarrely when Mike Pence was given the Vice Presidential slot, and as of late the fraud of Biden Harris, losing soundly on election night, only to have fraud votes appear to steal the election for them.

With all of this vote fraud, the DOJ is now sending the message that evidence of these crimes which would overturn elections, is not to be uncovered, and if you do uncover this evidence, the DOJ will either throw you into prison to rot like the January 6th group or you will be shot like Ashli Babbitt.

One of the last people to ever be involved in election fraud is Merrick Garland due to a Conflict of Interest as his job as Attorney General is owed to Biden vote fraud. None of the DOJ has been a good example as the DIA is now mocking Christopher Wray in not being aware of a Chinese defector who has information on the Wuhan biological weapon. Corruption and incompetence is the recording in the press of the entire DOJ and Merrick Garland has failed miserably. This seems like a constant them in each administration has their Jeff Sessions catastrophe, and the DOJ becomes the snake for four years eating it's own tail, being exposed like Loretta Lynch in tarmac deals, as the Department of Justice is a global mockery.

The current DOJ is nothing of a Republican form of Government nor even a Democracy. This is the same Thugocracy which precedes the worst of regimes. The world watched this corruption in the Wiemar Republic as some groups got away with murder literally, while others were vanquished by the police state. This is what the DOJ is, and every member of it, sits in silence. There are not mass resignations, there are not letters damning what is taking place. Instead the side show of the Black Robes of the Supreme Court who sanctioned election theft have now hunkered down together in the 9 voting as a unit, not for what is Constitutional, but over their protecting their own interests as now the election fraud which they condoned is a regime trying to overload the court to negate that court.

It is difficult in the putrid rancidicity of what is the Executive, Legislative, Judicial and the press to discover one which is worse as they are all a recumbent rape of common decency.  Each day feels like the barn animals looking at the laws written on the barn wall by the pigs, and figuring that they had been changed and when they look in the windows of the house, they can not tell the difference between the criminal humans and the criminal pigs.

The government which governs best is the one which governs least, because when despotery prevails, the Citizens will choose no government at all. That is the 1%'s end game in this, and what is taking place in America and areas of the world is the same King George and his Red Coats, appointing Tories to make slaves of American in their own nation, while attempting to terrorize them with the Negroes they imported into the land.

I'm quite certain that Wendy Rogers of Arizona already is on some FBI list, and is being monitored to see what crimes she has posted on social media, and as the NSA owns the Fortune 500, credit companies and banks, all of her records are being gone through with a fine toothed comb to see what is there, as no warrants are necessary as these are extensions of the government as the regime owns them clandestinely. This is how they took data without warrant on January 6th. She gets to vocal and she will be made an example of just like Oklahoma City which Merrick Garland helped cover up and has been rewarded for.

Todd Cochran and his liberal ilk always blamed the right for all the lunatic fringe stuff, and yet all of this is coming from the sources on the left. It is the twilight's last gleaming and all these artists are silent over the tyranny they created.