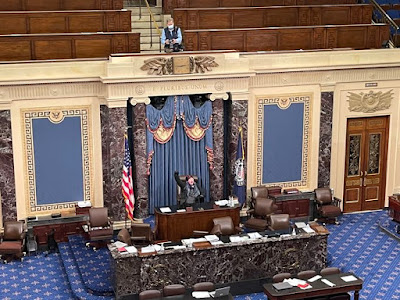 I will be frank in calling Revolver New and Tucker Carlson tourists, as they have caught up to what the Lame Cherry published in demanding the names of federal and state paid informants, operative and agents who were undercover on Jan 5th, 6th, 7th, in fomenting the breaking into the US Capitol and other events. That is the reality of living in the future, the press has caught up to this blog again by God's Grace, and I'm thankful that Revolver connected the dots on the Lame Cherry exclusive, including noting the agents and operatives noted in indictments were part of the riot.

That includes those who goaded Patriot Ashli Babbitt into being murdered for political effect. That includes information on the DC Pipe Bomber as this was a trained military individual and the FBI has not released the clear footage on this person, no more than the thousands of hours of Capitol footage which revealed peaceful Americans cooperating with police.

We at Revolver News have noticed a pattern from our now months-long investigation into 1/6 — and in particular from our meticulous study of the charging documents related to those indicted. In many cases the unindicted co-conspirators appear to be much more aggressive and egregious participants in the very so-called “conspiracy” serving as the basis for charging those indicted.

The question immediately arises as to why this is the case, and forces us to consider whether certain individuals are being protected from indictment because they were involved in 1/6 as undercover operatives or confidential informants for a federal agency.

In reviewing history in the FBI setting up Teamster Jimmy Hoffa, the coercion of Randy Weaver at Ruby Ridge which saw his wife murdered, the threats against Reverse Speech pioneer David John Oates in the FBI trying to cover up the mass murder of the Branch Davidians, the BATFE handing over bomb making materials to Terry Nichols for the Murrah Building attack, the funded smears of Americans by the FBI through the listing of Southern Poverty Law Center and ADL, to the Obama Holder enemies list of Governor Rod Blagojevich, Lawrence Sinclair, John Edwards and that infamous Hutatree set up, are but a fraction of what the Robert Mueller FBI engaged in, and has become sanctioned criminal framing of Americans to stop political movements like MAGA and stealing elections for the 1%, so it is not any surprise and it is logical by what the FBI has been hiding, in they had paid people all over that gathering, and the only reason those people get paid is if trouble erupts and it gives the FBI the opportunity to demand more funding from those boot lickers in Congress who have voided all oversight of this continuous police state cancer on America.

There are problems in this in this 1% and that means William Barr and now Attorney General Merrick Garland who is intimidating audits by States of election fraud, and it was Merrick Garland who conducted the cover up for OKC bombings, in they have given the propaganda sword to the Russians. It is not Republicans, it is not Conservatives, it is not democrats nor Donald Trump who are demanding protections for political discourse on January 6th. It is now President Vladimit Putin who is demanding Constitutional protections for Americans which the FBI is hunting down and the Department of Justice is holding in torture captivity, from isolation to cockroaches crawling on Americans designed to break them.

This blog has exposed all of this first. There are projections in this which can be provided percentages to probabilities. When the FBI is now talking about Qanon Fringe in being violent, as they spoke before of non existent militant groups who number 3 people and one was Canadian, and all they did was try and build a gun in a garage and spray paint a Jewish building,  Qanon is a DIA propaganda operation, and for the FBI to noting them again, means there is another operative set up appearing.
It is not an accident that Bidencon is defining Americans as domestic terrorists as that means an undercover operation is in the process of appearing.

Projections are logical deductions. It is logical as the vaxed are targeting the unvaxed that a crackdown from an event will generate in the South or the Midwest. It is not a coincidence that Bidencon has been setting up Kamala Harris to fail. They sent her out to the border which she astutely stayed away from as it is DANGEROUS, but now are pushing her out the door again to areas of America where Biden or Harris has zero political support in the South and Midwest. When like events appear it is logical to assume that somewhere the Vice President is being sent, the FBI has operatives already engaged in producing an event which will feature AR 15's, Trump MAGA Qanon, a group as Tucker Carlson mentioned was an FBI group behind the "attempted kidnapping of the Michigan Governor", featured because two Biden bills are in Congress for Domestic Terrorism and AR 15 bans, just as Gary Hart wrote the Patriot Act long before 9 11 was provided as the platform for those Bush laws destroying American Civil Liberties.

I have no idea of the schedule which has been created for the Vax Tour of Kamala Harris in the Midwest and South, but she has shown sense in not going where Bidencon orders her, and she can do events from her home, not from actual contact. The logic would be that the chosen FBI platforms would be Michigan and Ohio in the Midwest as they operated their in the Whitmer Events, and due to election fraud investigations to derail them, Georgia would seem a likely platform for another staged event.

I have no information on any of this. This is all public and it is the same projections which Gerald Celente engages in for this Trends Journal.

It is the likelihood of the projections which has this blog preaching to you to STAY HOME, do not go anywhere near any of this Michael Flynn stuff or Trump gatherings, get off of social media and stop getting yourselves into trouble, because 500 Americans have been arrested over January 6th and more harassed, and the biggest crimes of the theft of Nancy Pelosi's computer and the Pipe Bomber look like events which have given the FBI and DOJ excuses to go after the masses.

Tucker Carlson and Revolver have reached the same conclusions on their evidence. It is why you must stay away from all of this, shut your mouth, obey the laws, pay your taxes and stay home.

This is the Great Game India. So why not quote Dr. Seuss the socialist racist in something I just read as a blurb on a paper laying on the floor/

You need to have more sense than most of you have to get your head down and stop parading a round before this storm like it does not exist.