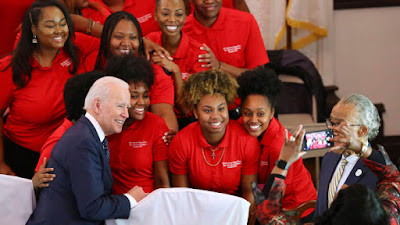 Do not be afraid of the vax my Negroes as we are not
genetically experimenting on you as we always did before.

What is left of Resident Biden's brain is most interesting in the restructuring.  Pedo Joe has been spewing a great deal lately in Bidenisms, from his version gun control which advocates Americans weapons of choice in atomic bombs to attack the government, to why those with bad tans are not being vaxed.

According to Pedo Joe, the Nig X, that is Blacks were experimented on by the government so Nig X does not trust Bidencon as the the vax is vaxing the Negro to death. Likewise the Latin X thinks that the regime is luring in the Beaner to get the vax, in order to slap the cuffs on them and send them back to their shit holes.

In forensic psychology for Pedo Joe to state the above, means he is Fauci hearing this in his present, that the vax is being used to use people as test tubes and that the vax is being used to track people. As this blog as taught, people always are telling you or confessing to you what they have on their mind. They have on their minds that which they have heard, and Joe Biden has been hearing the above in White House meetings.

It is needless to say but it requires saying to the low of comprehension, that Pedo Joe has been hearing some interesting information in this American gulag from gun grabs to what the vax is being used for in specific groups.

As Pedo Joe does not mention Whiteskins, in the South or Midwest and in concentrated on the coastal patrician groups,  the White X apparently are the ones investing in information and studies which actually prove that the vax is a Synthetic Prion which does not protect from the Spike protein in the bioweapon, which sets off COVID or diseases, the Prion will produce it's own Covax, or disease structure and that is what the prudent White X has protected themselves against.

It is a good thing that Joe Biden is talking. It is a good thing that his card writers are expressing warnings now that the vax is a weapon for political ethnic agendas. Perhaps the Biden vaxed have created like brains as Joe Biden has and what is spewing out of them is the same odd ramblings, but even in the odd ramblings there is a direct point.

First COVID-19 Cases May Have Emerged In
October 2019 In China, Study Claims