As the 1% Never Makes Mistakes 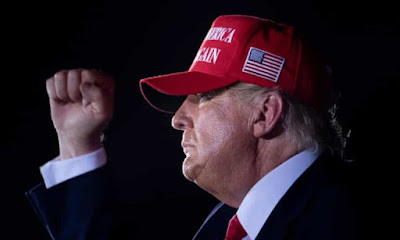 Each of you us caught up in this maelstrom of diversions, sexier than Michael Pare' in a uniform. In one dimensional thought as to objectives, the reality is what the 1% is engaged is is not logical.

For example, the reality is that in a January 6th mop up operation by the FBI of 100 million armed Americans, that the objective would be to concentrate them, in order to pick off the majority of rats in as short as time as possible. In order to accomplish this, there must be a centralized leader to delude the mob into thinking they are invincible again, so in order to entrap them.
It is one thing to flush the people of January 6th, in order to isolate them in their communities and then terrify them into mass submission, but the objective is keep the viable for criminalizing them.

The fact is the rats have fled the DIA operation, Qanon. Not even the praying Michael Flynn is drawing them in, as he is protecting the sources who fed him information from the DIA on election theft. In this, Americans are not standing around in the soybean fields on deer hunting day, waiting to be picked off for the trophy wall.

What was amusing was David John Oates discovered in reverse speech on Donald Trump, Mr. Trump bitching at the damned sheep for not following him. Trump's media power is weak, his drawing power to the 100 million who he abandoned without Amnesty to save himself is neutralized. In order to keep the illusion viable for a 2022 midterm election, a central leader spewing what Mr. Trump is, must be able to draw more people than Mitt Romney, and the fact is that Donald Trump can no longer inspire nor attract necessary support of an illusion.

The second part of this is the scattering of the sheep which Mr. Trump can not adhere together.  It is the shrill braying of the second most attractive woman in Washington DC, the lovely Jen Psaki.  Ms. Psaki is like 4 foot tall and her breasts are like mountains on this little package.  She seems always upset that AOC is the most attractive woman in DC, which is a shame as being number two is nothing to be upset about.

The White House, is in the process of making Mark Zuckerberg look not like a Nazi in Zuckerberg of the DIA is trying to limit the censoring the White House is involved in. What no one is asking is who in the White House is being paid 100,000 dollars a year plus to flag posts by ReVaxNiks in order to get Facebook to ban them. People are being paid huge salaries to do what fat, sweaty, disgusting women and men do in sitting on Facebook all day. Facebook is another fading platform in the young have moved on to texting each other how large their bean farts are. Facebook is basically the place of boring as hell people, or people who like to post how the vax is making their health a hell zone.

The entire trillion dollar investment in social media was to train weak little sims to glom onto each other in order to control them to being head up their ass in being stupid. With all the banning taking place as Trump concentrated the message, it produced a group weaned of social media, who are once again moving through the mysts in the dwindling group of trusted sources, which are being more concentrated and therefore having more power by influence.

The regime can have a billion idiots posting selfies, but the real power is the few who generate content which resonates these dull minds. Dull minds are of zero value to the 1% as a neutralizing force as they are already neutralized, There is not a public opinion of them which has been proven in the anti vax posts. The herd suckles the vax to their harm and it does not matter one whit what the Fauci propaganda says. They would have taken this vax if Biden had told them that they would be dead in a year, because that is what the Vax Leper is.

After admitting that government officials are flagging what they deem “misinformation” to Facebook for censorship, White House Press Secretary Jen Psaki said the Biden administration is exploring options to exercise more control over social media platforms.

“I don’t think we’ve taken any options off the table. That’s up to Congress to determine how they want to proceed moving forward,” Psaki said. “We are not in a war or a battle with Facebook. We are in a battle with the virus. The problem we’re seeing that our Surgeon General elevated last week is that… inaccurate information about vaccines is killing people.”

So in examination of this, the projection is, Donald Trump nor anyone of the Judas Goats has any value to the ReVaxNiks. They are not going to follow these chosen leaders in media or politics. What emerges then is the Rugged Individual.

Take away Social Media by Jen Psaki, and it trains the Rugged Individual further to be resolute in not needing a whiner choir to support their every bean fart. In moving to destroy a civilization in genocide and gain absolute control in the SynForms via vax zombies, the concentration of Rugged Individuals in dispersing them, teaching them, making them stronger, is creating a competitor species who are logically not what the master race 1% would desire, but yet they have done just that.

Therefore the FBI is being manipulated not to hunt down and suppress the 100 million Americans, but to gleam from the a concentrated form, the FBI is not hunting, but in psychological pressure forming a superior species. The reality is the DOJ and FBI are not aware of this, to the field agents, as they have been psychologically sorted as the Judges to produce this rat maze which the rats are running through.

This is the political police state pressure to refine this more advanced species. The 1% desires this group and is expending the DOJ and CIA to get it. The 1% will therefore expend this police state when the desired results are completed.

The 1% desires these superior Spiritual forms. That purpose is hidden in the rites of the 1%. It is though the logical projection on cause and effect. If death or control of every mind and soul were the objective, then that could have been concluded without the draam or hysteria. Therefore this conclusion is the logical projection as the outcome exists.

It is all stone cold Steve Austin.