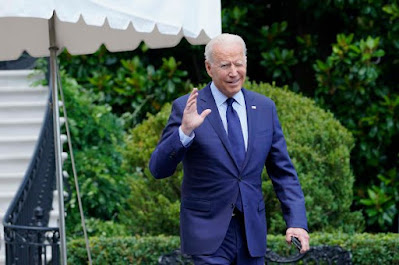 Biden - 'I Don't Care If You Think I'm
Satan Reincarnated'

There is a point in this beyond 10 dollar a bag Doritos and a crashing economy being looted by the 1% which will be the waymark for Resident Joe Biden, and that is something no one has projected out, but the Lame Cherry will.

124 Million Democrats Have Taken Trump Vaccines
...What Happens If They Start Dying?

Alex Berenson - You Know How I Know Public
Health Authorities Are Lying? Their Own Data

We Live In A Fraud Of Unprecedented Dimensions

Snyder - 'Health Freedom' Is The Hottest Global
Political Issue, And Our World Will Never Be
The Same After This

CJ Hopkins - Make The Red Triangle Nazis Used To
Mark Their Political Enemies. Put 'Unvaccinated'
In The Center And Be Forced To Wear It In Public

There is data appearing which reveals that more than a few thousand people have died from the vax. So that is not glossed over, all of the Reagan, Bush, Palen and Trump voting country is Reagan Blue America where the towns are all under 5000 people. So to say that only a few thousand people have died from this vax, is to mirror most of where America's rural people are as this represents their entire communities being wiped out by this data.

The Lame Cherry will provide for you the Biden Achilles Heel.

The above link from Rense.com reveals that 124 million ADULT communists have take the Biden Trump Vax. A greater percentage of liberals have been vaxed than Christians. So the concentration of maiming in heart destruction, brain rot and organ degradation is higher in liberals so their 4.5 million overlays on that 124 million much higher.

When you are winning, you don't give a damn about what the opposition is saying. Joe Biden who is under 1% orders to get everyone vaxed with prion poison is now has a White House division flagging Facebook and Twitter posts. Pedo Joe has even called for Dr. Mercola to be banned from the internet as Jen Psaki demands that people banned on one platform be banned on every internet platform.

So you understand this, liberals do get banned from social media, you just do not hear about it as much, so liberals are hearing that people can not say things, and are wondering too, what it is that they should not be hearing, in the Bidencon taking rights away from them as bleaters who can not think and reason information out to make their own vax decisions.

Once again, Pedo Joe is flagging and interfering with a greater percentage of liberals who think they stole this election so they should rule, but are finding out they are being schooled in they do not amount to anything.

Add to this the maimed from this vax, the adverse conditions. These people who are maimed, glowing in the dark, degrading, getting the virus again are wondering what is taking place, because they trusted the regime. The numbers are growing of people who are waking up to being woke.

Now the 1% have a programme in this, and that is to blame the unvaxed. There are problems in this for Pedo Joe, in it is the vaxed who are spreading this because it is the vax not a Coronavirus 'variant".  The problem is people who got vaxed are getting sick, when they are told they should be protected and for the record, the ReVaxNiks are not getting sick. They are not spreaders or shedders. There does seem to be more of the deliberate infecting of people and the reality that Mockingbird stories are being planted on Blacks, Whites, Mexicans who are now dying with the virus, and are begging for the vax, and being told it is too late.

Ah, Cuomo history in this out of New York shows that people who got the lethal strain of this bioweapon, were n ventilators and were not begging for anything as they were incapable of any actions, so the Mockingbird stories attempting to show the repentant ways of the unvaxed are bogus, and meant to terrify people of limited reasoning to take the vax.

This returns them to the numbers. When 4.5 million know people who died. This number will overlay with the greater numbers of people who know of people or animals who have been harmed by this vax shedding. These numbers amplify and as Joe Biden's hysteria of his waxed butt is being chanted, the public at large is reasoning this out that this vax is harmful and instead of blaming the unvaxed as is the regime programme, the public will look at this and say:

With that loud mouth Donald Trump, we had 1.97 gas.

We had food we could afford

We were opening the country up again.

We were getting stimulus checks

We had a vax we could choose to take

We are being threatened again with lockdowns.

We are not longer getting money.

We took the vax, trusted in it, and now we are getting sick again.

This is Joe Biden's Achilles Heel. The 1% has the megaphone to lie and tell the public to hate each other and snitch on each other, but the public can only be lured so long into blaming themselves. Those who promised them a beer and brat on the 4th of July are now hunting them down on the internet, are not doing anything about inflation but making it worse in 3 trillion dollar looting of the Treasury, they have done nothing about the border disaster, the drought, the fires in the West and the line about blaming the unvaxed as the rulers of America, is one which will come to be rejected more and more as the Biden Trump magic potion did not fix anything and each of us know people who got sick or died, or pets that got sick or died.

Joe Biden is losing his value to the 1%. The propaganda is failed. That ghoul Dr. Anthony Fauci who Biden is protecting is the greatest alienator of policy on the planet. No one wants something that looks like cancer to be telling them to trust them, when they people sick and dead from the information.

The window on Joe Biden has closed as a leader. His body is reanimated, but his brain has fled the building. The mindfucking which was to drive the vax forward is stuck. It ended with the dogged efforts of Jeff Rense driving the alternative message and now like the Swedes, French and Germans sitting in the mud in Stalingrad in the mistake of invading Russia over the centuries, this vax is stuck in the mud.

We are reaching a breakpoint in this and if the order comes for mandatory vaxes, this will be the tipping point . I sincerely believe they can vax people in other methods and this is a diversion so other measures are being installed to drive this into 2022 AD in the year of our Lord, but for Pedo Joe to be braying about the vax and being troubling senile, that vision is enough for people who are vaxed to begin the rejection process of these policies.

That is the Catch 22 in this and this is producing the engineered distrust and the necessary distrust in the weighing in the balance of the setting up of the Great Deception.

We are moving though this current in the time flow matrix as it surges toward the falls.