The LIttle General That Could 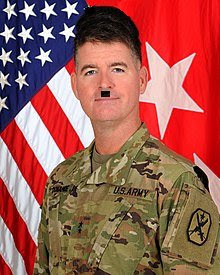 It is so comforting that Donald Trump raised to the command of Fort Benning Georgia the most White Wokist in the military in 2020 AD in the year of our Lord, who is calling on Americans to report other Americans.

"Block and report the trolls and the disinformation tinfoil hat team."

Only the most secure of soldiers would post such a thing in declared martial law on Americans for the FBI to hunt them down. And we can be assured of this, as not one member of Congress or Donald Trump is calling for his firing by Pedo Joe Biden.

Yes America is secure, with a commander like Pat Donahoe to not only back up Resident but replace him.

An actual active Major General in the US Army, @PatDonahoeArmy, accusing people who question him on Twitter that they're "shills for Putin." Seems he's thinking more about how to score a Morning Joe appearance that anything related to defending the U.S. pic.twitter.com/qvBpjR6Aho

The Woke General is not out of bounds for calling on the crackdown of all Americans who do not agree with the Pentagon. It is not beyond the perimeters of this that General Donahoe has under his command, not one officer or soldier questioning him, just like with the Nazis and Communists. He has a free hand to rule and just look at what resources he has at his command to march through the South to make General Sheridan look like the Welcome Wagon at Christmas.

General Donahoe is already at war with a troublesome part of America and it is only one command away before he orders his divisions to storm through the South and start injecting them anti vaxers and replacing elected governments as Lincoln did in Maryland. The General also has the Command American School, so he could send out Mexicans, Brazilians and whoever to deal with American or as he puts it, the trolls and tin foil hats.

The General has branded all those who disagree with him as assets of Vladimir Putin, or in military tribunal language, that is defined as a traitor, and that means the military can shoot you or hang you. You are probably ignorant of Mr. Lincoln's war in the 1860's where he started legally defining Americans as criminals, not Soldiers, so that the President could implement all sorts of  Constitutional violations.

The reality is that Pat Donahoe is not alone. You rremember Michael Flynn? Well this traitor has a brother rewarded with the Pacific Command. That might sound odd in Woke World, but Mike is protecting those in the military that generated the election theft, and why should not the military put someone into command to protect the Chinese bringing in new colonists into America. America has all wokerster running all these military bases  and just one command, and all that firepower gets unleashed to deal with Americans.

You remember General Wes Clark? Why before he tried to start a world war with Russia in the Balkans, it was his tanks shooting nerve gas into Waco Texas and incinerating children in a bunker. The military is very active and  historically hung John Brown and openly discusses about shooting Americans at long range sniping, if they get orders from their commander in chief.

So it is wonderful for America at this juncture to have a Pat Donahoe in charge of enough firepower to obliterate Dixie. MacArthur shot American Veterans in Washington DC, so the ground being wetted with the blood of Veteran Ashli Babbitt is good seasoning in the US Capitol.

Let us just understand Pat Donahoe on his mission from the 1% as his orders are to post things like he does, so other DIA operatives will note it, to inflame people in America, so there will be another major break of trust between  Americans and their institutions. The FBI has accomplished a superb job in this as Bill Barr wonderfully has made the DOJ untrustworthy so Merrick Garland has had a most easy time of it dispatching his federal minders to the city states.

I would though that Pat Donahoe was more inspiring. He needs bigger hair, a Hitler upper lip gender hair and his nice communist red star  flag to rally around, but maybe some shoulder pads as he has vagina gender shoulders and some rainbow ribbons to add some flash to his gender would help, as marching through the South requires some homosexual and other future legalities to speak to the wokesters as the bodies of the trolls and tin foil hats in the millions pile up as the woke military is dispatched to deal with the population.

So one day you may be surprised to hear that the Chinese or Russians are not marching through America and mowing down Americans, when instead it will be the 198th Infantry Brigade shelling Vicksburg.

Let us all embrace the kind of America that General Pat Donahoe has the firepower to order.