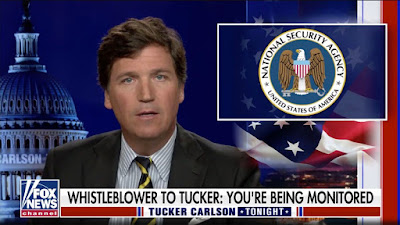 In reading through the Axios apology for the jackboots of the US regime spying on him, there is one literal and factual reality in the same excuses were made in spying on Donald John Trump, in it was incidental.

Incidental is the legal excuse for illegal actions by the United States government playing cute with the law. The Five Eyes are all in on this. America spies on other peoples and hand the intel over to their security services and for cover MI6 and the Canadians front for thee American CIA, FBI and Homeland.

It does not matter if Tucker Carlson was mailing Vladimir Putin friends in America to gain an interview with him, for the simple reason, TUCKER CARLSON IS SUPPOSED TO BE PROTECTED BY AMERICAN LAW THAT HIS IDENTITY IS NEVER REVEALED IN NSA DATA MINING GRABS TO ANYONE, UNLESS HE IS A KNOWN SECURITY THREAT.

This is the garbage that Samantha Power, Sudan Rice, John Brennan were involved in, against Donald Trump. No one reading these emails from Tucker Carlson would for a moment in the intelligence groups, not comprehend that this email requesting an interview was nothing but a request for an interview. This is not a national security threat. This is what Tucker Carlson was railing about was the ideologues in the US regime who were spying on him. They have absolutely not any reason to take the step to unmask his name as it is not the US regime's authority to find out who in America is trying to interview any foreign leader.

In a real Government by the People, in a real Biden administration, the person or persons involved in this would not only be immediately fried, but they would be brought up on charges for abuse of power for unmasking Tucker Carlson. The reason nothing will be done in this, is because these abusers of power are involved in this daily. The pedophiles are sifting baby cams hooked up to the internet, the pervs are using On Star to track people they want to fuck. This is a programme where industry like Bill Gates nudie perv parties are recorded and he rolls over like all these execs to woke status and where all these politicians have dirt on them and are blackmailed.

When Tucker Carlson was contacted and leaked to, about a private email outreach, and the NSA was the source of the data collected and it was someone in the CIA, Homeland or FBI, who made the request inside the Biden regime to find out which reporter was off the reservation, and not buffing Joe Biden's ass after the Putin Biden meeting. Yeah Tucker Carlson was alerted to this, but if this was some other troll at CNN, CBS, CNBC, ABC etc... that reporter would have had their producer or editor called in and that reporter would have known they either give up or they will be gone.

This is what is taking place in Bidencon. This is the same Obama abuse of power and the same abuses of power under Donald Trump which were files added to for the time when Trump was gone so they can destroy people like Ricky Vaughn for example.

These are the facts. Joe Biden is the head of a criminal organizatized police state.