One Fat at a Time 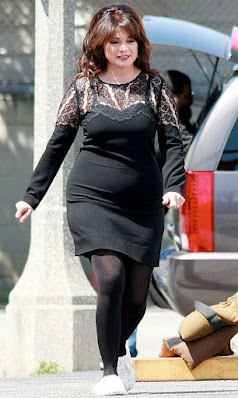 Q: You write about placing more blame on one of your ex-husband’s other women than you did on him. Why the double standard?

A: To this day, I really am much more angry at her than I ever would be at him. I don’t mean that all men can’t (be faithful), but a lot of them can’t. There are a lot of great men out there; I happen to be with one right now. I just think as women, we need to stick together, and we don’t need to be (sleeping with) another woman’s man. I’d been to this woman’s house pregnant! There’s nothing more wrong.

Q: You write about your ex in such a loving way. Though you have a boyfriend (Tom Vitale), are you still in love with your ex-husband?

You know, with this push of Nothing News in Bidencon, there are limits to the whining I can tolerate, as the washed up Valerie Bertinelli is apparently burrowed into the Food Network, which is something I had no idea existed, as I do not watch loser television as I actually have to work and pray, and that takes up 34 hours a day for me.

Anyway, fat Valerie Bertinelli, who admits she knows she is fat, admitted that she does not give a damn about her audience, as this was the first time she read comments directed at her, and some women told her she was fat and needed to lose weight.
To this Bertinelli went before the camera for her close up, as her 15 seconds of fame ended back in the 70's in that unfunny show One Day at a Time, which championed divorce and other Christian hating things...........where was I?

Oh yes, everyone knows Bertinelli is fat and no one wants to see it. The thing is that a bunch of other losers rose to defend her fatness, and that solved nothing even with the fucking F word appearing in the fucking tweets.

Bertinelli was whining about losing her parents so she could not lose weight. So you got a rich woman, who has had more than 99% of people have had, and she is making excuses for as Joan River said, "Yeah blame me for stuffing the potatoes in fat Elizabeth Taylor's mouth".

The thing is being fat served tubby Val for decades. She made cash off of being fat, with Weight Watchers and Jenny Craig. Two decades of cash for being a fat ass and loving the attention, but now she is upset that someone says she has a fat ass. Apparently if you pay Valerie to say she has a fat ass, she likes it. Just typing it up for free makes her use it for whore attention.

Valerie Bertinelli's Got This! The Actress Gets Painfully Honest About ...

I was reading the article in all of this in how Valerie Bertinelli "lost" her ex husband last year, the guitar legend Eddie Van Halen. I don't think that is quite honest as you can't lose something which is not yours. She was trying to horn in on this attention when Mr. Van Halen was dead, the reality is that Mr. Van Halen was married to his second faithful Wife.

The worst part of it is, is that Bertinelli went on fat Oprah to blame Eddie Van Halen for the marriage break up. Eddie Van Halen had real class in being blamed. He took it and never said a word about Bertinelli cheating first as she leveled the charges.

That is more than Eddie's kid could muster, as he came to his fat mum's side and threatened to terrorize the woman who said Valerie Bertinelli was fat. Absolute silence from Valerie Bertinelli in this. Not any care that her son just threatened a criminal act on another person for her, and not one word of caring for Wolfgang to tell him to stay out of trouble.

Let us shift gears in this after the above evidence to someone fat and disgusting like Kristi Alley. You remember her in that Tom Selleck Robot Movie. Man she was hot. Now she is not. But the Lame Cherry will tell you what Kristi Alley is, she is not a Goddamn whiner. She is out there taking on Hollywood, liberals and her latest warnings are this Goddamn pedophilia taking over America. It is amazing what a strong woman can  turn herself into, as Kristi Alley is no longer fat or disgusting, she is a strong woman who people admire and respect as she is no longer hiding behind her looks, but you are witnessing the courageous person she is.

The enablers of Valerie Bertinelli are doing her not any good. She whines about weight and pain. Whines about losing her parents. She never lost her parents. They died. Mine died like every person's parents do and I didn't have a rich rock n roll legend husband or son that I betrayed.  I dealt with it in Christ like I do all things, instead of crawling into a piece of pie. Valerie Bertinelli was fat when her parents were alive and when she had the world by the ass. There is not one poor person here with all their fat would not have relished having Bertinelli's life, because they would not have cheated on their husband or been sucking lezbo twat.

There is a tonnage open on the View with the firing of Meghan McCain. Bertinelli needs to apply as she would fit right in with those obnoxious whiners blaming everyone else in the world.