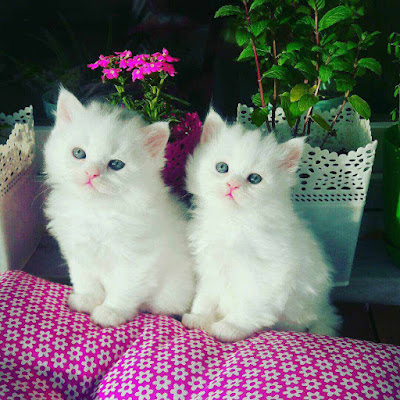 Two years ago we took our stud cat Molly over to my Grandpa's place and some asshole accosted him, so he was wild and leery ever since. He had disappeared and I wondered about him, and then today when we went up there, I heard this cat mewing in the tree, and it was a white little bobtail with blue eyes. I may have not seen Molly, but this was Molly's work.

She cats take their young ones to other places and leave them, which really scares them, but tests their navigation to get home. I knew these were the neighbor's cats, so we scooped him up, and took him home.

The husband was delighted as there were 5 of the kittens and only one was there. So we spent an hour visiting, and we came back and I had to pump up a tire, and I thought I heard a cat. So I got TL and we looked, and sure enough our ear eyes discovered one kitten, then another kitten appeared in a Siamese and was purring and I found the last one in tall grass, a bit wild.

So back we went and the husband was smiling from ear to ear and scooped them and cuddled them back to the barn.

We were in good standing with the couple before but now we are gold.

This helps as the wicked uncle had shot their cat which Beloved Uncle had been feeding when it was on the place.  I know they hear me shooting things here and wonder about their cats, so this display of the returned prodigals will prove we protect their animals.

He has been very good in his animals were out all the time when wicked one was here, because they hated him. The cattle have been in ever since we have appeared. Beloved Uncle always said about PR or public relations work, and that is the easy part in being a good neighbor.

I suspect that Molly is just over the hill to the homeschoolers as they seem to have animals and are good people. I know he was around 3 months ago as the kittens are proof of his visitation.

Well that is the way it is. Baby kitties at home safe and warm and not out in the cold rain probably going to die. It is a good deed which keeps on giving as God even saved Nineveh for stupid people and the animals.