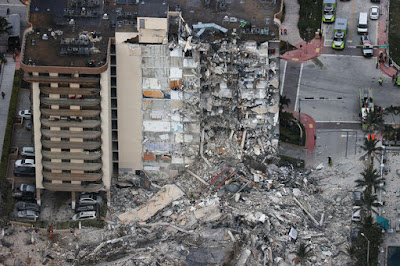 I will assume that most of you have heard of the Florida condo collapse and while I am skeptical of the video below of the same location, the fact is that this condo in the video was pulled or brought down by demolition kick charges like Building 9 was pulled on 9 11. 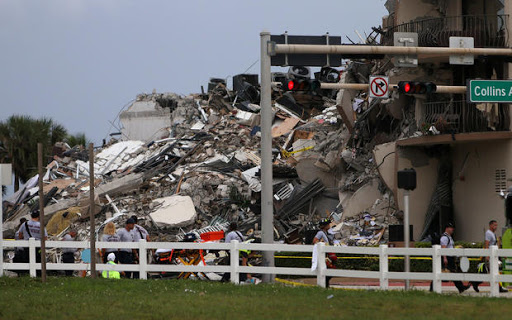 You can make up your own mind if this is the same location.

What is of interest me is John McAfee who died in police captivity and stated if he died, he would have been murdered by the government or their extensions, is that the rumor was he had his fail safe tetrabyte of information stored in this condo which would be released after his death.

12 hours ago ... For three weeks, the world has watched the painstaking rescue effort in Surfside, Fla., after a beachfront condominium collapsed, leaving 95 ...

The Lame Cherry deals in projections here. The question is why would some brilliant regime agency not just go in and zap a dead man's switch, and the answer can logically be produced in analysis.

John McAfee was a brilliant man. If this was John McAfee he would understand that a dead man's switch would require an uplink to the internet which was not hardwired.

In simple terms, most of you have email that has a vacation reply. A computer could have a program to fire an email to an account like Google and the Gmail would send an auto response which would reset the system. McAfee would not have to go anywhere near the account after it was set up, and there could be any number of switches set up which could set the system into countdown. As McAfee based this on his death, all that would be required is a webcrawler, as in a news email subscription from several sources, and if the spam filter found McAfee Dead, it would be in a program set up to fire off a confirm email to McAfee's phone or another email dump and if McAfee did not reply, the dead switch would begin running.

So how would you defuse this?

Hit it with EMP? McAfee would have thought of everything from power being cut, to wifi signal grabbers like the FBI's Stingray to a simple hardwire which would activate if someone entered the condo without sending in a code. Nothing that a brilliant or rich man could not set up.

As far as a tetrabyte of information, that is cell phone size small now, so that is not needing a library.

So the projection of shutting down a system like this would require a power cut, which would go to battery power, and the process would being. Unless a jet or a military bomber blew the building to bits, or as 9 11 proved, concrete makes fine grinding powder of humans and all things in a tower. In short, jam the wifi or grab it, shut the power down and then have the concrete grind a server into powder That is the way a system could be voided, as in bringing down a condo with piles of people in it as the wetware was expendable as on 9 11.

The purpose of this exercise is not to promote the McAfee rumors nor to give credence to the story of why this condo was brought down. The purpose is to examine the reasons if they fit that a condo was pulled and why it was accomplished in this type of operation.

With the Five Eyes grabbing all data, it is possible in the system since McAfee was captured, to sift through all the data with super computers, and reverse speech with remote viewing to pinpoint the location, and to find that server which was communicating in popping a series of emails which were the same content and receiving the same reply. That is a pattern which would have alerted the AI to a positive location.

If the condo was not the source or the red herring, I doubt McAfee was lying. That means that the original or a series of dead man's switches are still out there and the clock is ticking on them, as Mr. McAfee has been dead long enough that the McAfee Switch would have tripped operational, with an appropriate down time in case he was alive to keep the information dump from happening until he reset the system.

As McAfee knew viruses, it is highly possible he could have loaded this information with a viral portal which would infect and upload his information to numbers of public platforms or in the gemstone of we have all witnessed in the movies of a broadcast which can not be shut down.