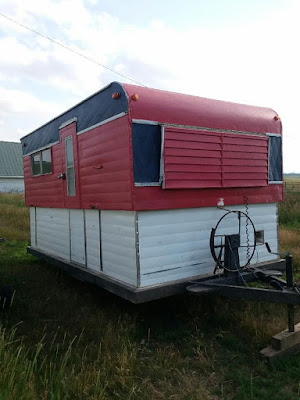 Three of the big wastes of money are new cell phones, sports cars and campers. Given any of them, some sucker buys one for retail, and soon discovers that they could not sell the damned thing for a dollar as no one wants the damn thing, like a guitar.

JYG had given to him as everyone give JYG wonderful things, this camper which I was assured is from Colorado. Now why someone would pull a patriot coach like this to the Brier and then give it away, is proof  that no one wants things that you think you want.
JYG was accommodating with our purchase in we replaced the jack and it was the hardest 160 bucks he earned that day, as the winch system which raises this thing is not right, so that comes now to us in either engineering it so it stays up, or creating a better lift using pick up camper jacks which I would weld up. 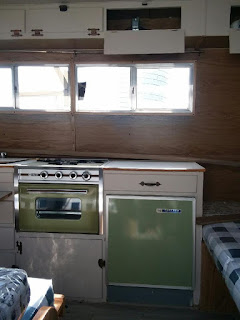 As you can see this thing still has the plastic on the new mattresses and the shine on the appliances. IT is old as Reagan, but looks showroom new. It is much better than campers I have been in previously which smelled of piss or of toxic levels of mold and mildew.

It is a heavy mother from when America made things to last. I have no intention of ever going camping in this thing as it has one purpose and that is to be an emergency shelter if we have to get the hell out of Dodge. One never knows if nuclear fallout or whatever invasion shit may happen. You can have your stock portfolios and bags of gold, because when we get this thing dinged up, as I suggested those who have the space to get some cheap ass junk yard camper to survive in, in case you have to flee.

So here is the thing, you get to sleep on the wet ground with spiders with stocks you can't get at and gold for you pillow  giving you a headache, while TL and I will be off the ground, dry, warm or cool and quite secure in our patriot wagon, yes the Conestoga of the frontier is red white and blue as someone did not have taste. Personally I would love to have TL paint this thing in camo as it would be both intimidating, cool and be harder to see.

For as heavy as this monster is, it pulls like a feather. It is perfectly balanced, has two good old American radials on it, from when America made tires which lasted 100 years, and as I said, if things go south, we are going to be sleeping warm and dry, well fed on our propane stove, probably have charcoal back up for outside and you will be wearing your sports shoes out walking, carrying your shit, cramped in your escape vehicles and looking for a place to sleep, and home will be, wherever the patriot wagon is.

Hell, I can put a running gear on the ball hitch and use ox and horse to covered wagon anywhere there is grass.

Yes we are preparing and the thing is God is providing things for us, and He would not be doing that unless things were coming.

I know it ain't much for a poor orphan girl, but it is a sure as hell more than most of you have not thinking past jack or shit.