The Vax of Armageddon 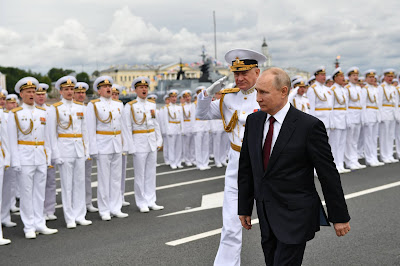 With a new era dawning in the FBI is no longer parroting that all evil in the world is Russian, but that all hack attacks now come from communist China, perhaps there is a window of light to actually examine something the Lame Cherry has noted.

I preface this with the caveat which is not a secret in the Lame Cherry admires the political career of Vladimir Putin. Mr. Putin rose to power after the Bush fam and London looted Russia. Bill Clinton during the Yeltsin years, warned western policy makers that they could not continue humiliating the Russians and get away with it.

To this the Russians had Vladimir Putin pick themselves up, crush Muslim wars against them, retake their natural resources and survive the endless sanctions the west has heaped upon Russia, much to the rising costs of living of Americans being swindled by foreign ownership of the American gun industry as Russian merchandise is banned.

Vladimir Putin is the most adept world diplomat on the stage. He is remarkable in not being baited, has survived assassination attempts, has built Russia into a self sufficient power in a streamlined economy and political industrial directive.

With not placing this as flattery but fact, the Lame Cherry comes to the point.

President Putin after meeting with Resident Joe Biden of the United States, made three public proclamations.

1. If the English violate Russian waters again in Crimea, the Russians will sink the English warships and it is not going to start world war.

2. The United States is a degraded power and it's zenith has past.

3.  Russia can handle any military situation and Russia will win.

Those are all factual realities, as there is no woke Russian Soldiers, Police or Politicians. They have one vested interest and that is Russia for Russians and have invested in the weapons to protect Russia.

That meeting with Pedo Joe Biden, was followed by another statement by President Putin, again this time an affirmation that the Russian Navy can deal with any threat above or below the waterline. Russia once it's military moves, can not be stopped. The intent is clear, that America or NATO have nothing which can stop Russia from carrying out an attack on American or NATO forces.

The Lame Cherry is not examining the validity of that statement as this is about something much larger than Russia sinking cheap British ships.

5 hours ago ... Russia President Vladimir Putin said the countries navy was able to launch an 'unpreventable strike' if needed. Speaking on Sunday at a Navy ...

This is the second time that Vladimir Putin has gone kill shot on those 1% forces pressing Russia. If one examine the entire history of Vladimit Putin, he has never been a statesman who issued threats or informed NATO that Russia would obliterate it.

Since meeting Joe Biden the Putin pattern has changed. The Lame Cherry notes patterns as they have significant meaning.

What the question which must be asked in this, as America is gripped in Biden vax terrorism, is that it has been established that mood changes and emotions have changed in people who have been injected with Moderna, Pfizer, Astra Zeneca and Johnson and Johnson vaxes.

Unlike Joe Biden and the American elite, Vladimir Putin was injected with a real vax, the Russian Sputnik, just as numbers of Americans have been injected. So the question now arises, does this Sputnik vax produce a mood change, where there is less tolerance and one is more prone to react in a less diplomatic manner. This vax is designed to make people into compliant zombie in the west. What if the vax the Russian's created with this spike protein, enhances a part of the brain like a mother bear protecting her own and will follow through with that decision.

This is what the Lame Cherry is examining. This popular girl made poor orphan is not stating what the propagandist would jump to in the President of Russia is dangerous or mentally incapacitated. That is refuted in one look at Joe Biden who was installed in being dangerous and incompetent.

It is the point though, that those who have been using Russia as a punching bag, thinking they can Obama Clinton Biden reset things without consequences, are facing the fact of a Russia which is stating it will sink NATO ships, Russia can not be stopped and that Russia will win. Those are factual realities and into this, enters now if this Sputnik Vax is a reason that President Putin is less tolerant, and that the 1% trolls of the West who have been humiliating Russia since Bill Clinton, funded from the Bush43 years the Obama lab, Fauci vax which the world has been terrorized over in the Wuhan biological weapon. All of this genocide of Whites in wokeism is so blind, that using the vax and other fraud measures for control, may have just created a nuclear armed President in Russia who will with crushing force smash those who invade Russian space. What will come of those who shoot a Russia and Russia will take casualties? Mr. Putin in the Obama era released a massive hydrogen bomb cobalt torpedo which for five years beginning with a nuclear tidal wave, would wipe out all life where this weapon was detonated.
So you comprehend this, the 1% has started something with Russia. The Russians have been patient and are now stating exactly as Adolf Hitler stated he would accomplish if attacked. Russia is not going to accept losing to the West. Russia may not begin a first strike, but Russia will end with a final strike in revenge. This is what Vladimir Putin is telling those who press Russia again.

Mr. Putin's approach has changed, and the only known reason is the vax.

The United States as in all of NATO has nothing but incompetent usurpers. China is a devious prostitute who wants Russia to fight America and not China. The FBI is blaming China for hacks while the British are again trying to start a war between America and the Russians. The partners in this are London and Peking with the Ashkenaz bankers. The incendiary point in this is, Russia has drawn a line in the sands of war due to aggression against Russia from the West.

Is the prion the trigger in this and in essence is it this vax which will start the war, which ends in a global nuclear war?

This is why God has this Lame Cherry here. I'm made to notice things to bring them to the attention of the masses, whereby the information is stolen and rich people pretend they are poor and do not donate. It is arising that this will be to every person's great harm.

Does the Russian vax produce a protective posture unlike the English and German vaxes which are designed to make societies compliant to the rule of the feudal few?

The pressing of Vladimir Putin will answer that question.