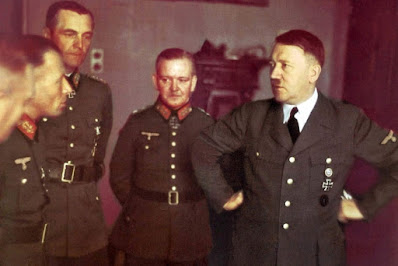 It has been a disservice to humanity in the effective propaganda and smear of the leftist intelligentsia and media concerning the subject of Adolf Heutler, because it has robbed the world an understanding to recognize the heights and depths which a genius of this caliber can bring to the world.

I remember the accomplished actor, Anthony Hopkins in his portrayal of Hitler in the Bunker during the last days. It was a superb performance but it left me empty and wondering, because Mr Hopkins produced such a caricature of the propaganda of Hitler, instead of the man.

I have never conducted and in depth forensic psychological evaluation of Adolf Heutler, in only rejecting the propaganda, from the deliberate speeding up of film by Americans to make him appear cartoonish to the ridiculous blame heaped upon Germans for now closing in on a century. Nothing in this world is as bad as Hitler has been created as.

In a few incidental brushes with der Fuehrer, it is possible to conclude that he was a political savant. He was a genius and for lack of a better explanation, Adolf Hitler like Joan of Arc had an instinct in reading people, and nations. He literally knew the weaknesses and strengths and was able to use them to his advantage which produced monumental results in domestic and foreign policy in his almost decade in office.

You have heard the word "mad man" associated with Adolf Hitler often, and he featured screaming rants which appear to have originated in public school as a child. The Lame Cherry is going to provide you an insight though to Herr Hitler which should have everyone examining the lies about this person, and gain an understanding his abilities.

Adolf Hitler made moves in Europe as it were his chessboard. He positioned France and England against Italy, by using Spain, and then being effective, focused on his flank, which was protected by Italy in Austria and a problem in Czechoslovakia.

In this der Fuehrer intended to annex Austria his homeland, but he lied about it to the outside world and ost of all to Austrian leadership. In the end Herr Hitler summoned the Chancellor of Austria, laid down demands of annexation, and then pressed the issue with his own Army who did not have a plan to invade Austria.

As Hitler harangued the Austrian Chancellor in a Hitler Fury, he rushed to the door, screaming for the head of his Army to come at once, leaving the Austrians alone in the room. When the head of the Army appeared on a dead run, waiting for orders from the leader, Adolf Hitler was found grinning, and simply said, he wanted nothing, he just wanted the Army General there.

Adolf Hitler was engaged in political theater. He was not angry, he was not out of control, he was not mad, he was using stage rage, for lack of a better term to bluff people. Make no mistake that Adolf Hitler did put people in their graves and people knew this which added to their terror, but his yelling and ranting, was more like having a blistering sound attack, like a rock concert speaker in your ears, that you just shut your eyes and grimaced until it was over with and by that time you were ready to agree to anything to just get away from that wall of sound.

When Adolf Hitler learned this has never been revealed, but he used it effectively all his adult life. It is recorded he spent hours on end, posing, taking notes and critiquing his own speeches like a comedian would to see which lines were most effective, and what it actually required to transform this good orator into a spellbinding speaker to a person who sent audiences into hysteria. Adolf Hitler understood human psychology and his natural genius was honed to perfection as no orator in history has equaled.

Adolf Heutler did this without rock concert shows, without fireworks, without drugs. He was a Wagner performance for hours on end in ranting or speaking, and people sat there mesmerized by his control of that stage.

Discounting this as madness is a disservice to educating people as to what to be aware of. It is far more disturbing of reality that Germans an numbers of people around the world were followers of political genius than a mad man who could be dismissed. There appears to be not one thing insane about Adolf Hitler. His genius was real and he has never had an equal

As it is closing on 100 years in the passing of Adolf Hitler, real history will have an opportunity to leave behind the cliches of "that corporal" and "that mad man" so a genuine scholarly account and examination of Adolf Heutler can be engaged in for an accurate historical record. Perhaps when 6 billion people are expended in death over the next years 1% tribulation, that will put an end to the mantra of "6 million Jews died in the holocaust" which has done no service to mankind, but gotten in the way so that we in humanity have been diverted so that 6 billion of us will be vanquished from this life.

That is the irony in "never again" for while we were told how bad Adolf Hitler was, we never noticed the other Hitlers who have seized the world and marking us all as dead men and women.