A Gallon in Time saves Nine 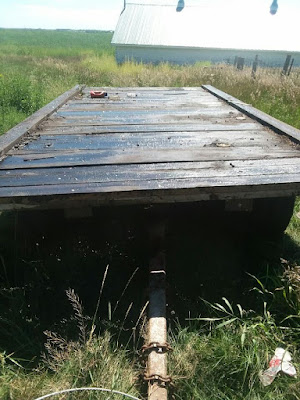 OK this is your million dollar knowledge, to you ungrateful bastards, but the time is coming in a global meltdown and crackdown that if you are not in FEMA camps, you will be busting your brows the old Mexican way with the beaners. That means sweating and covered in filth and going to bed that way.

Odd thing is, it also means you just won't have the money to go to the store to buy wood, and if you did, there is not going to be wood, and wonderful you is not going to have the muscles or will to saw your wood by hand as it will take days to get the kind of board feet for a trailer.

I doubt even then it is going to occur to your lying asses that "Gee maybe if I had been more generous to God's Prophetess my ass would not be in Egyptian slave labor".

So what do you do with your precious commodities of wood, on trailers and things, as you will not be able to go buy sealers and other expensive shit.

The answer is the Lame Cherry Brier Patch way. It is called used motor oil.

As I have been out of the farm business for sometime, I did not have tractors or gallons of used oil seeping around, so I turned to my Godsend in JYG. JYG has everything, but JYG does not share with everyone. In fact, JYG has to like you, and even if he does like you, he will still work your ass off for something worth nothing because you need it.

So I spent two hours taking wheels off rakes and I even fixed an AC unit he  got in as I wanted it, but as soon as I got it running, he wanted it, so that ended that sale.

What I was after was used motor oil.

What is paint? Fancy colours and oil.

What is used motor oil? A lovely combination of Lebraya Tar Pits and JYG's secret ingredient in old as Noah gasoline that should not burn the most.........then again gas mixed with sludge usually is not that combustible and this time I did not start on fire.

The essence of this is Beloved Uncle had a hay trailer. Someone who was a problem basically stole it with his brothers, and parked it in a leaky shed where it was dry rotting. Enter us, who pulled it out, and saved it as wood is expensive. To put a bed on a trailer like this now would be...........da da da.........around 1600 dollars. Big ass bucks and as I try to save money, the solution is to put on black motor sludge mixed with old gas so it soaks into the wood.

As I was slathering it on, TL was marveling as I was how the wood was bubbling. Yes the wood was dry and full of air, which when wet fills with water, expands the wood and causes even more rot and decay.

With the Brier Patch Special Paint though it is now all stinky soaked in and repelling water.

Ok this took da da da...........thinking........around 15 gallons........in paint costs that would be......da da da 450 bucks at least as wood soaks up paint like a sponge and that paint always peals off like a sunburn in a bit. Not sludge though. It just embeds dirt, bugs, coon shit.......and seals up tight, and you dump more of that on every few years. This trailer should be treated again sooner than later as it does have some rot, but it should good to go then.

So 1600 dollars for a replacement deck. That does not include the 500 dollars of labor.

Or Lame Cherry's method of recycling which for me was free even at 200 dollars.

I have been doing this on trailers since before I was old enough to know better on things sitting outside in all snow, ice and rain, and the stuff has not decayed at all. One thing about wood is it will not rust with oil on it.

Never could figure out why people whined about old motor oil. To me it was the gift from God. We used it on everything. Slather that shit on cattle with biting flies and that ends the fly problem.

So that is the Lame Cherry prepper survival stuff as you will never hear that from your freeze dried beans vendors as they never think real world. You are not going to get to fucking sit on your ass in your hideout eating beans for a decade. You are going to have to get shit done and make things last as the stores will be closed.

Lots of burned out computer cars coming, meaning lots of oil to be used. It is how you get buy when people do not donate and everyone is cheating you. You just got to think out of the box with the Holy Ghost and not expect ideas to be pulled out of your ass.